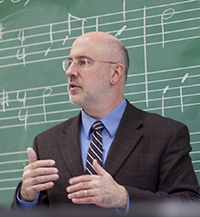 Last week, Professor of Music Theory Gary S. Karpinski was the subject of an entire episode of the Note Doctors podcast, which examines the work of innovative music theory instructors. The podcast is hosted by three university theory instructors - Paul Thomas (Texas Woman's University), Jenn Weaver (Dallas Baptist University), and Benjamin Graf (University of North Texas) – and focuses on a highlighting best practices with regard to teaching music theory in higher education. Listen to the full episode here.

A member of the UMass Amherst Department of Music and Dance faculty for over 25 years, Karpinski is the author of three seminal works in the fields of music theory and pedagogy: Aural Skills Acquisition (2000), Manual for Ear Training and Sight Singing (2005; revised 2017) and Anthology for Sight Singing (2006; revised 2017). He has served as president of the Association for Technology in Music Instruction and the New England Conference of Music Theorists, and his publications have appeared in such journals as Music Theory Spectrum, Journal of Music Theory Pedagogy, Music Theory Online, and The Computer and Music Educator. Every three years, Karpinski hosts a week-long program called “Workshops in Music Theory Pedagogy”  that brings distinguished authors and scholars from across the U.S. to the UMass campus.