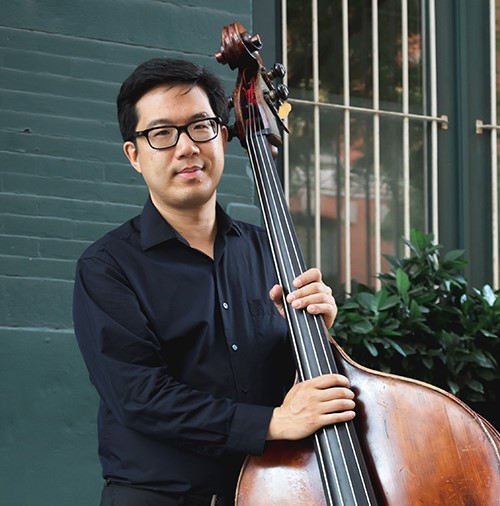 251 Bromery Center for the Arts

View performance sample:
"Wind Up Bird and Tuesday's Women" from his composition The Elephant Vanishes: Jazz Interpretations of the Short Stories of Haruki Murakami (2019 CD release on OA2 Records)

Shigefumi Tomita is Assistant Professor of Jazz Performance and Pedagogy at UMass Amherst.

An active jazz bassist proficient on acoustic and electric basses, Shigefumi has worked with Joe Lovano, Joey Baron, Tony Malaby, Ben Monder, Vincent Herring, Anthony Wonsey, EJ Strickland, Jeremy Pelt, and Ron Affif. A longtime resident of New York City, he performed at such renowned venues as Carnegie Hall, Town Hall, Gracie Mansion, The Up Over Jazz Café, The 55 Bar, Cleopatra's Needle, the Garage as well as Cecil's and Trumpets in New Jersey. He has recorded with the Impromptu Jazz Trio featuring Lou Rainone on piano and Robert Weiss on drums; their first CD was released in 2011. He is also active as a composer and bandleader and has led a number of his own gigs and sessions. His compositions are featured on his recording, Untold.

Relocating to Rochester, NY in 2012, Shigefumi remained active on the jazz scene performing with Dariusz Terefenko, Mark Kellogg, Tony Caramia, Mike Molito, Gian Carlo Cervone, the Roc City Stompers and the New Energy Jazz Orchestra. In addition to performances at the Eastman School of Music, the Rochester Institute of Technology, SUNY Brockport and Keuka College, he performed on the main stage at the 2013 and 2015 Xerox Rochester International Jazz Festival. For two years, he also held a weekly residency at the Next Door Bar & Grill with the Dave Detweiler Trio and their first recording, No More Blues, was released this summer.

As an educator, Shigefumi has held private teaching studios in Portland, OR, New York City and Rochester, NY. He has taught at the Larchmont Academy of Music, Diller-Quaille School of Music, the Eastman Community Music School and the Eastman School of Music. While at Eastman, he was nominated for a TA Prize for his classroom teaching.

251 Bromery Center for the Arts