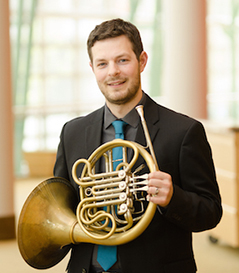 270 Bromery Center for the Arts

A native of Ohio, Joshua Michal is the Associate Professor of Horn at the University of Massachusetts in Amherst, MA. He is a member of the Rhode Island Philharmonic Orchestra and the Hartford Symphony Orchestra and a faculty member at the Interlochen Summer Arts Camp in Michigan.

Dr. Michal has performed with the Chicago Symphony, Cincinnati Symphony, Boston Lyric Opera, Albany Symphony, Portland Symphony, Charleston Symphony, Columbus Symphony, Dayton Philharmonic, Cincinnati Chamber Orchestra, the United States Coast Guard Band, and the Breckenridge Music Festival and has toured with the Boston Brass. From 2007-2009, Dr. Michal was a member of the Civic Orchestra of Chicago and was actively involved in music outreach efforts within the city of Chicago through MusiCorps and the Merit School of Music.

Dr. Michal can be heard on the Resound Label with the Chicago Symphony Orchestra under the baton of Bernard Haitink performing Mahler’s Symphony No. 2 and on the Analekta label with L’Orchestre de la Francophonie Canadienne as solo horn for Bruckner’s Symphony No. 4.  He has also recorded with the Cincinnati Symphony and Albany Symphony. Currently, Dr. Michal is recording his first solo album of world premiers for horn and electronics by Peter Van Zandt Lane, Mark Oliveiro, Salvatore Macchia, and Gordon Green with additional pieces by Tyler Ogilvie. The album is due out in 2019.

270 Bromery Center for the Arts