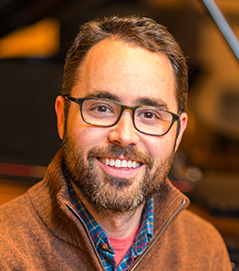 360 Bromery Center for the Arts

Jason Hooper is a music theorist specializing in the theory and analysis of tonal music, historical and contemporary theories of form, and new approaches to theory pedagogy. His articles and reviews appear in Music Theory Spectrum, Journal of the American Musicological Society, Rivista di Analisi e Teoria Musicale, and Theory and Practice. Jason was co-editor (vol. 44), editor (vol. 45), and associate editor (vol. 46) of Theory and Practice and previously served on the editorial boards of Intégral and Indiana Theory Review.

Jason teaches a variety of undergraduate and graduate courses at UMass Amherst. He received a Residential First-Year Experience Student Choice Award for helping first-year students succeed academically. Through a Fellowship for Innovative Teaching and a Professional Improvement Fellowship, he redesigned the first year of undergraduate music theory around more collaborative and student-centered pedagogical approaches, with an emphasis on popular musics and fretboard spaces.

Jason holds a PhD in music theory from the CUNY Graduate Center, as well as an MM in music theory and a BM in trombone performance from Indiana University’s Jacobs School of Music. He received the Barry S. Brook Dissertation Award while at CUNY and the Patricia Carpenter Emerging Scholar Award from the Music Theory Society of New York State. He is currently learning to play the banjo and is actively involved in the conservation of coldwater resources in Western Massachusetts through the Deerfield River Watershed Chapter of Trout Unlimited.

360 Bromery Center for the Arts