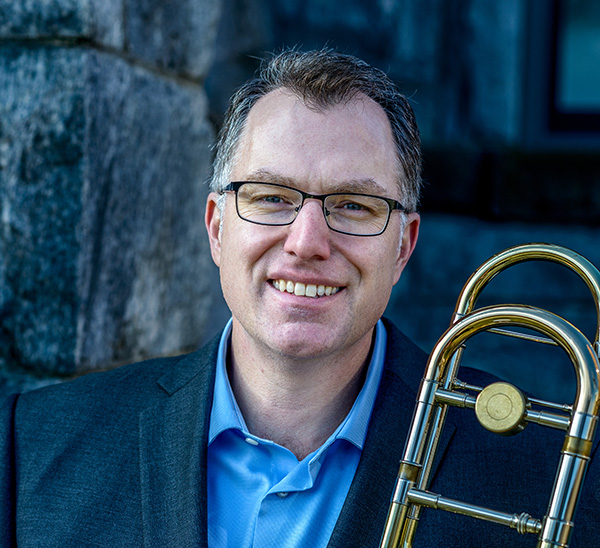 Trombonist Greg Spiridopoulos has gained recognition as one of the most sought after trombonists in New England. Since 2001, Mr. Spiridopoulos has been principal trombone of the Albany Symphony Orchestra, which is dedicated to commissioning and recording new American works. He can be heard on the Albany Symphony’s 2014 Grammy winning album, Conjurer, featuring music by John Corigliano, and the 2016 Grammy nominated album, Kabir Padavali, featuring music by Christopher Rouse. The Albany Times Union hailed Mr. Spiridopoulos’s performance of the Pulitzer Prize winning Trombone Concerto, by Christopher Rouse, as one of 2014’s highlight moments in live classical music. In 2018, as a part of the Kennedy Center for the Performing Arts SHIFT Festival, Mr. Spiridopoulos performed with the Albany Symphony Brass Quintet on the steps of the nation’s capital, in a special live-stream performance sponsored by National Public Radio, the Kennedy Center, and the office of New York Senator, Chuck Schumer.

In addition to the Albany Symphony, Mr. Spiridopoulos is principal trombone of the Glimmerglass Opera Festival Orchestra, Rhode Island Philharmonic Orchestra, Boston Philharmonic Orchestra, and second trombone of the Portland Symphony Orchestra. He has performed with the Boston Symphony Orchestra, under the direction of Seiji Ozawa, James Levine, Bernard Haitink, Mstistlav Rostropovich and Robert Spano. With the Boston Pops, Spiridopoulos has performed under the direction of Keith Lockhart, John Williams and Erich Kunzel. Christopher Hogwood, Grant Llewellyn, John Nelson and Harry Christophers have led his appearances with the Handel and Haydn Society. For his work with Handel and Haydn, Mr. Spiridopoulos designed and built replica Classical Period alto and tenor trombones, which can be heard on the 2011 recording of Mozart’s Requiem, under the direction of Harry Christophers, on the CORO record label.

In 2013, Rolf Smedvig appointed Mr. Spiridopoulos as trombonist of the internationally acclaimed Empire Brass Quintet. With EBQ, he performed throughout the United States, including performances at the National Gallery of Art in Washington, D.C., Spivey Hall in Atlanta, Georgia, with organist Alan Morrison, and at the Cathedral Basilica of St. Louis and the Overture Center for the Arts in Madison, Wisconsin, with organist Douglas Major. In 2014, the Empire Brass premiered Zhou Tian’s Night Shining White at Colgate University. Spiridopoulos has also toured with the Burning River Brass ensemble, which included performances at Cleveland’s Severance Hall and New York City’s Metropolitan Museum of Art. He has appeared multiple times at Trinity Church Wall Street in New York City, with organist/composer Julian Wachner and the Majestic Brass Quintet, and can be heard on Mr. Wachner’s Choral Music, Vol. 2, on Naxos Records.

A native of Vienna, Virginia, Spiridopoulos studied with Milton Stevens and Lindsey Smith before studying with Curtis Olsen and Philip Sinder at Michigan State University, where he earned his Bachelor of Music. While at MSU, he was a proud member of the Spartan Marching Band. He earned his Master of Music from Boston University, studying with Ronald Barron and Scott Hartman.