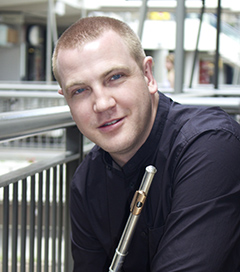 Pretoria News declared: “du Toit makes you believe the impossible. With du Toit in flight one is never aware of technique alone. He is driven by purely musical inspiration.”

A strong advocate for the musical arts, Cobus is an avid soloist, chamber musician and pedagogue who has recently joined the faculty at the University of Massachusetts Amherst. Cobus can be heard live in concert across the world with summer performances in Colorado, California and Indonesia.

As an international soloist and chamber musician, Cobus has performed with orchestras in Russia, South Africa and the United States and on concert series in Taiwan, Japan, Germany and France. Cobus has been a prize winner at over a dozen competitions which include the 1st UNISA Southern African National Competition for Woodwinds and Brass, the Byron Hester Competition, the Myrna Brown Competition and the SAMRO International Scholarship Competition.

In addition to being the principal flute for the Boulder Chamber Orchestra, Cobus is also the flutist for the Antero Winds, a professional woodwind quintet that has been prizewinners at both the Plowman and Fischoff chamber music competitions. Cobus self-produced two recordings available through online platforms: Tríptico with classical guitarist Patrick Sutton and Mythavian with pianist Doreen Lee.