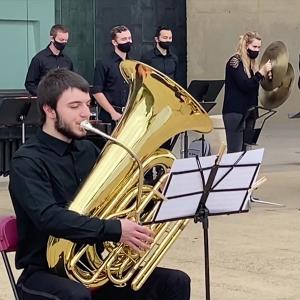 The UMass Wind Ensemble presents "Standing Together," a series of streamed performances on the Music & Dance Department’s YouTube Channel. The title references the socially-distant manner in which the students stood outside during the recordings, and the unified approach employed by the entire Music and Dance Department during the pandemic. Each Saturday night at 7:30pm from December 19 to January 30, a different work (or works) is being presented. All were recorded live during the fall 2020 semester.

Direct link to this Jan. 30 video