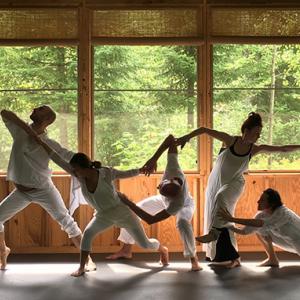 Stuart Pimsler Dance & Theater (SPDT) present their most recent work, “Terra Incognita,” including a cast of UMass students. This work by Artistic Co-Director Suzanne Costello blends movement, film, and voice to explore the emotional underpinnings of nature's seasons as metaphors for the stages of life.

The performance will conclude with a talk back/informal conversation between the performers and audience.

Part of the “Connecting the Dots/The Pioneer Valley” project, a one-week SPDT residency February 11-16, 2019 that will engage diverse communities in and around Springfield and Amherst, MA.

This project is supported by an Art Works award from the National Endowment for the Arts.

SPDT has engaged populations worldwide through its performance works and community inclusive programs since its founding in New York City in 1979. Artistic co-directors Suzanne Costello and Stuart Pimsler and their company of compelling artists continue to garner acclaim for their "theater for the heart and mind." Read more about the company here.