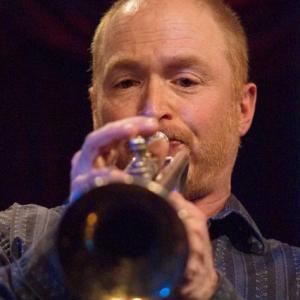 "The lyrical genius of the trumpet"
- Chicago Tribune

Trumpeter Brad Goode is a unique and instantly recognizable virtuoso. Whether working as a soloist, bandleader, lead trumpet man or sideman, for 25 years he has consistently been one of the busiest performers in the United States.

Brad led his own combo in Chicago from 1986 until 1998, appearing at major festivals and night clubs around the world, including a twelve year stint as leader of the house band at the famous Green Mill Jazz Club. As a Cultural Ambassador for the Mayor Richard Daley of Chicago, he led jazz groups on tours of Asia and the Middle East. He was named one of the most influential Chicagoans of the 1980s by the Chicago Tribune, who credited him as a “major catalyst in the revitalization of the Chicago jazz scene.”

In recent years, Brad has increasingly appeared as a lead trumpeter with many big bands and symphony orchestras. His 15 solo recordings can be heard on the Delmark, Sunlight, SteepleChase, and Origin labels.

Mr. Goode has served on the faculties of the American Conservatory of Music, New Trier H.S., Cuyahoga Community College, The University of Cincinnati College Conservatory of Music, and The University of Colorado, where he is currently Associate Professor of Jazz Studies. He makes frequent appearances as a soloist and clinician at colleges and high schools throughout the U.S. Brad also performs as a jazz bassist and drummer.