Alum and artist lights up the Studio Arts building with an interactive sculpture, and more 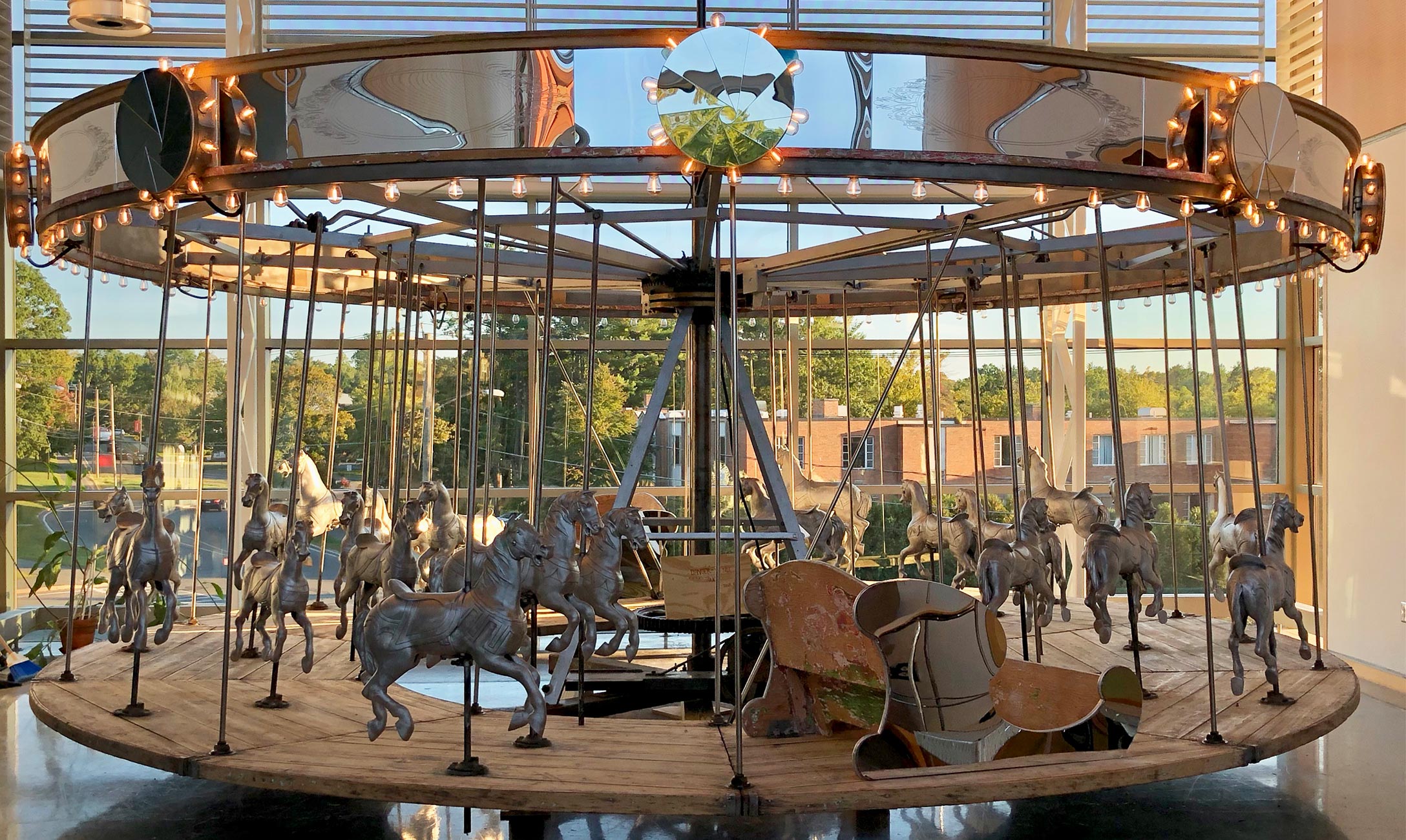 At first glance, the reimagined 1924 carousel installed in the Studio Arts Building last winter may have looked like an ordinary merry-go-round. But it was actually Vimoksha—part of the senior thesis exhibition titled The Passing Show by Kathryn Fanelli ’20MFA, who describes it as an “interactive, kinetic sculpture.”

“This is the culmination of a three-year focus that considers bigger questions in our universe of time, illusion, impermanence, and perception,” says Fanelli. Visible to passersby, the carousel lit up from 6 p.m. to 7 a.m. each day. “It’s a beacon of light in dark times,” she says, “which I think we all need.”

Vimoksha (Sanskrit for release, or liberation) also has a sound component—making metallic squeals and creaks when it turns—that Fanelli describes as “unexpected yet intrinsic.”

Though she grew up in the carnival business, Fanelli never had to reassemble a 7,000-pound carousel before. With no manual, no help, and plenty of doubts, she pressed on. “I rewired the electrical components, learned welding to repair parts, consulted with a metallurgist, sandblasted the entire body, grinded, polished, resurfaced, and laser cut mirrors,” Fanelli explains.

Fanelli’s vision took over a year to manifest. “I greatly appreciate the opportunity to work toward something so meaningful to me,” she says. “It has been a gift.” 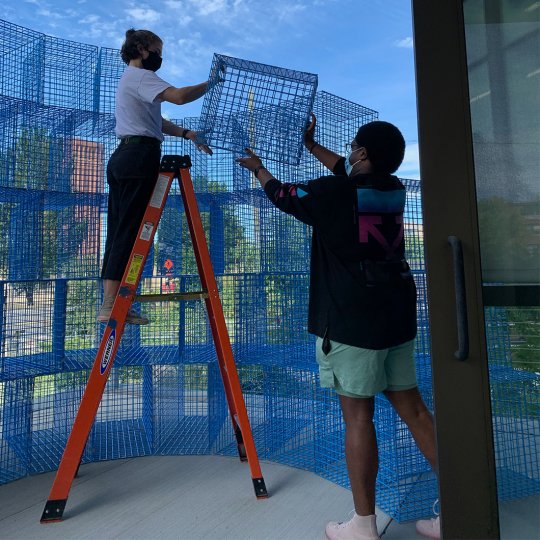 Forecasting the future—in order to change it

Climate change can feel very conceptual, straining our imaginations to visualize problems and potential solutions. Carolina Aragón, artist and assistant professor of landscape architecture, works with her students to design attention-grabbing art installations that highlight the impacts of climate change.

The installations aren’t just beautiful—and ominous—they’re accurate depictions of our future based on current calculations of climate change progression. For example, the FutureWATERS installation shows how high flood waters could reach in East Boston, allowing the public to physically understand and digest the information. “Our program is a wonderful blend of science and art that gives students unique opportunities to explore how they can directly contribute to improving our shared environment,” Aragón explains.

Joyia Smikle ’22 worked with Aragón on the FutureWATERS project. “It was a really special experience for me,” She says, “Bringing awareness to climate change in a manner that visualized the rising sea levels really put art and its intersection with landscape architecture into perspective. This experience started my love for resilience planning, which I hope will be incorporated into my future career.”

Nigel Cummings ’21MLA, who participated in several projects, says, “I find the challenges unveiled by climate change to be exciting to solve. The necessity for such interventions requires designers to throw out what we think we know and open our minds to possibilities we may have never imagined.” 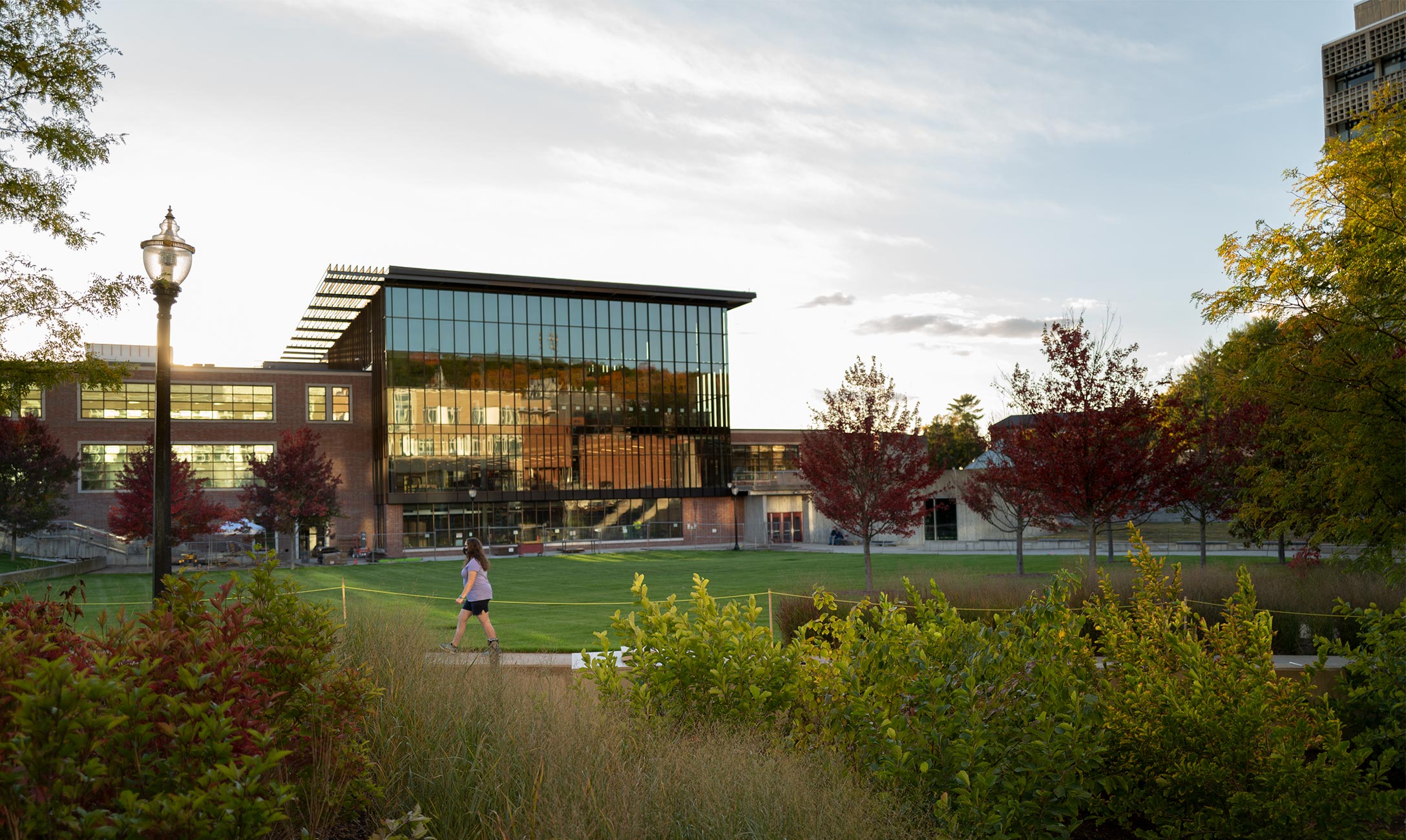 The Student Union has remained almost constantly in use and largely unchanged since its construction in 1957. Back then it was the largest building on campus, and was designed to provide the student population of 4,800 with state-of-the-art facilities. Since then, the campus has grown substantially and so has the need for an upgrade. Fortunately, after two years of renovations, the new Student Union opened its doors this spring and can now meet the needs of 21st-century students.

Updates include a rain harvesting system, new information technology infrastructure, and a “Main Street” promenade. The Student Union will also be home to 25 student organizations, including the Bike Co-Op, Student Bridges, and the Massachusetts Daily Collegian.

“The Student Union renovation offers us a new beginning,” says Morgan Reppert ’21, editor in chief of the Collegian. “The Collegian is a place for every student to share their passion, tell their story, and most importantly, be heard. I’m looking forward to continuing that in the new space. On a less serious note, I am very excited for quicker access to Earthfoods.”

Earthfoods Café has also received a face-lift. In their previous location, they were separated from the kitchen and had limited storage areas. Now, with their new resources, the food stays fresher longer and less ends up in the trash. Seamus Cusack ’22, the manager of Earthfoods since 2019, shares his take: “This has shown us that students have a voice and that UMass sees us as a legitimate business. This new space makes us feel like this is a fresh start. We are grateful to the university for giving that to us.”