A new burst of cosmic breakthroughs

When you look up at the night sky, searching the heavens for planets, stars, and galaxies, you’re actually looking at the past—sometimes thousands, millions, and even billions of years into the history of the universe. That’s because the light from those celestial bodies takes that long to reach Earth. Astronomers can use this to their advantage as they seek to answer questions about the early universe and its evolution. Ironically, it is the pursuit of understanding the past that is driving innovation in space technology. With only 10,000 professional astronomers in the world, and just 35 faculty astronomers at UMass Amherst (one of only 10 programs in the state), our scientists have been a part of an astounding number of groundbreaking collaborations.

Magnetic fields? There’s a map for that 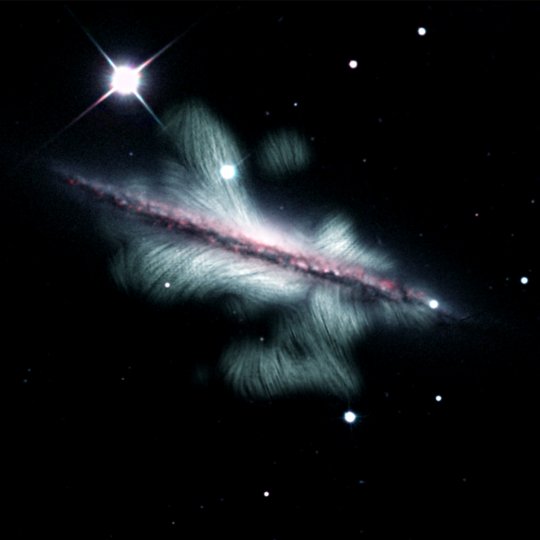 NGC 4217 may look like a license plate number, but it is actually the identification number for a galaxy roughly 67 million light-years from our own that’s making waves in the study of galactic-sized magnetic fields. NGC 4217 is similar to our Milky Way in that both are spiral galaxies. New observations about the magnetic fields associated with these spirals is providing clues to their formation. An international research team that includes UMass Astronomy Professor Daniel Wang was able to successfully map the magnetic fields in and around galaxy NGC 4217 and released the first composite image last summer—a beguiling series of brushstrokes extending in tufts from the galaxy. Wang, who studies the flow of energy within and around galaxies, believes that being able to map the magnetic fields in interstellar space could be the key to understanding the seemingly chaotic processes of galaxy formation and evolution.

In a monster galaxy far, far away

When Christina Williams ’10MS, ’14PhD and Assistant Professor Katherine Whitaker ’05 made observations at the Atacama Large Millimeter Array (a collection of 66 radio telescopes in Chile) over a year ago, they had no idea they would actually make a field-altering discovery—12.5-billion-year-old light from inside a “monster” galaxy. Roughly the size of the Milky Way, this galaxy challenges the notion that early galaxies were small and slow to create stars. Williams had noticed a dim light: “It was very mysterious, but the light seemed not to be linked to any known galaxy at all. When I saw this galaxy was invisible at any other wavelength, I got really excited, because it meant that it was probably really far away and hidden by clouds of dust,” she explains. This new find ignites even more questions, including “How common are these hidden galaxies and how does their prevalence change our understanding of galaxy formation?”

Williams and Whitaker plan to continue studying their newly discovered galaxy with the help of NASA’s James Webb Space Telescope, which is expected to launch later this year. This high-powered infrared telescope will allow them to peer through the dust veil around the galaxy to study the properties of the stars within it and start answering some very old questions about the universe. 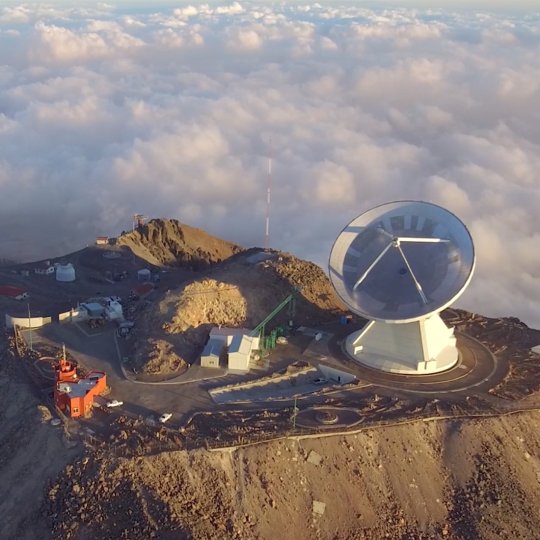 For space buffs out there, images of black holes are old news. In fact, over a year and a half ago, the international Event Horizon Telescope collaboration released its first image of a black hole that’s big enough to comfortably swallow our entire solar system. Fortunately, it’s over 55 million light-years away.

But how on earth did astronomers achieve this? For starters, they used the whole earth. By synchronizing eight radio telescopes around the globe, the Event Horizon Telescope team recorded and combined many petabytes of data (one petabyte is equal to one million gigabytes, or more than 66 billion Facebook photos) to create that one image.

After their success, they were awarded a $12.7 million NSF grant to design and build a next-generation telescope to further their studies of the mysteries of black holes. UMass’s own Astronomy Research Professor Gopal Narayanan, who led the team that ran the Large Millimeter Telescope in Mexico that was part of this collaboration, will be researching and creating prototypes for the new telescope installments. “It’s very gratifying and immensely exciting to see the results coming out after years of work,” Narayanan explains. “At times it looked like an impossible task. But we showed that you can collaborate on this scale and get results.”

National Academy of Sciences gets another UMass member

Daniela Calzetti, professor and head of the Department of Astronomy, has been formally inducted into the National Academy of Sciences, one of the highest honors in the scientific community. This well-deserved recognition highlights her remarkable career of award-winning original research focused on star formation, and on galaxy formation and evolution. Calzetti is known worldwide for “Calzetti’s Law,” a tool she developed in the mid-1990s that, among other things, allows astronomers to estimate how much information they are missing due to dust obscuring probes of very distant galaxies.