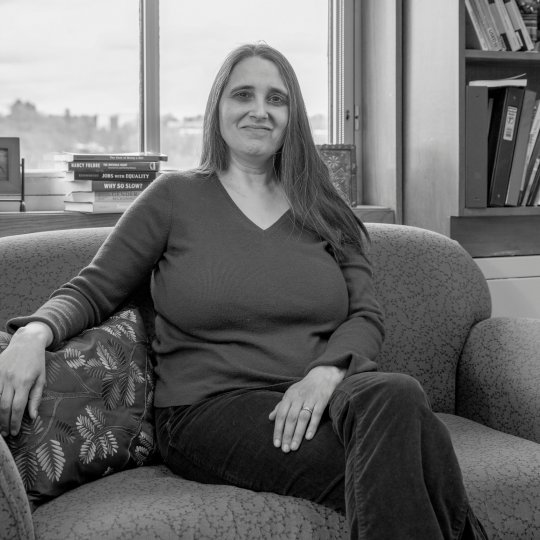 Despite having raised their educational and skill levels, mothers still face a motherhood penalty: they have lower incomes than women without children, says UMass Amherst Professor of Sociology and Public Policy Joya Misra.

The surprising findings by Misra and two colleagues were published recently by the Washington Center for Equitable Growth. Misra, widely recognized as an expert in gender studies; Eunjung Jee, doctoral student in economics; and Marta Murray-Close, economist with the U.S. Census Bureau, found that the motherhood penalty persists even as mothers have significantly improved opportunities for economic advancement. “That should make the motherhood penalty a lot smaller,” says Misra.

The trio of researchers made an essentially airtight case for their conclusion that motherhood leads to lower incomes by using rich data from labor market studies in three time periods between 1986 and 2014 and testing a variety of models. Misra says, “When we control for age, job, and experience and education, it appears that the big driver for gender gap is about parenthood.”

Misra began to research gender inequalities in the 1990s, when gender scholarship was a fledgling focus area in economics, taking an academic risk as she worked on her dissertation. After decades as a comparative political economist, she sees a fix for the motherhood penalty: family-friendly policies such as extended paid parental leave and universal and accessible government-supported child care.

A criminal past might predict worker performance—yet not in the direction you would stereotypically assume. Professor of Sociology Jennifer Lundquist has found that in the military, ex-felons are promoted faster and to higher ranks than other enlistees based on their performance—in one striking statistic, they are 32 percent more likely to be promoted to the rank of sergeant than enlistees with a “cleaner” record.

Using data from the Department of Defense acquired through the Freedom of Information Act, Lundquist’s study followed 1.3 million ex-offenders and nonoffenders who enlisted in the military between 2002 and 2009. As the only large-scale employer that accommodates the hiring of ex-felons in significant numbers, the military provided a huge sample group.

The researchers believe that the study could lead to a change in attitudes among private-sector employers about hiring ex-felons, resulting in greater job mobility and other successful employment outcomes for ex-felons and also open more possibilities to employers.

Imagine using a smartphone app to scan your food for bacteria: how handy would that be, especially when you’re eating raw? Lili He, associate professor of food science, is developing just such an invention.

Focusing on preventing microbial contamination, He has created a rapid, low-cost method for detecting bacteria in water or food samples. She and her team designed a reliable bacteria-detecting chip that senses whether fresh vegetables carry “a bacterial load.” The chip relies on a two-step method: an optical process involving a “capture molecule” that attracts and binds to any bacteria, and a chemical detection process. The optical detection method has already been modified for personal use, utilizing a smartphone adapter that is available online.

The invention is also a time-saver, as the present standard method for culturing bacteria from food samples can take as long as two days. He’s method gives results in less than two hours.

Have you ever considered the evolutionary advantages of sweating—or how human beings came to be so sweaty in the first place? To trace the evolution of perspiration in human and nonhuman primates, graduate student Andrew Best and Assistant Professor Jason Kamilar in the Department of Anthropology examined nearly three dozen species of primates. Best and Kamilar report primate species living in hot, dry climates tend to have sweat glands that carry more glycogen, which supplies more energy for producing sweat. Primates in hotter, arid regions also have more blood vessels feeding their sweat glands, showing an adaptation to their environment.

Current ideas posit that human ancestors gained the ability to sweat more than two million years ago, when they migrated to more dry, open habitats and began to traverse long distances. The next phase of the team’s research will test hypotheses about the role of climate in activating sweat glands early in life. 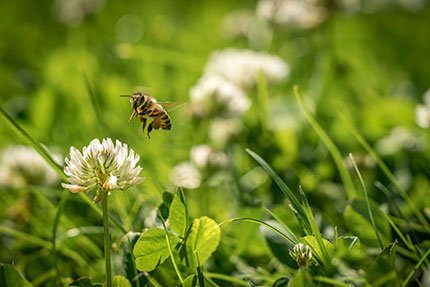 Skip the Lawnmower, Save a Bee

Although we tend to focus on the impact of large-scale agriculture on bees, the way you maintain your private yard can actually do a lot for pollinators—and for those who mow (or hate to do so), that means doing less.

Both domesticated and wild bee species are in decline due to agricultural intensification and habitat loss. But if you limit mowing your lawn to every two or three weeks rather than weekly, points out Environmental Conservation Research Professor Susannah Lerman ’11PhD, you give flowers a chance to bud and bees a chance to forage.

Lerman and her colleagues counted lawn flowers such as clover and dandelion, measured grass height, and identified bee species to understand how bees respond to changes in mowing frequency. They found that floral diversity and bee abundance peaks at a growth period of about two weeks.

For busy people who don’t have time to maintain pollinator gardens, the perfect solution is to give bees—and yourself—a break, and let the grass grow.