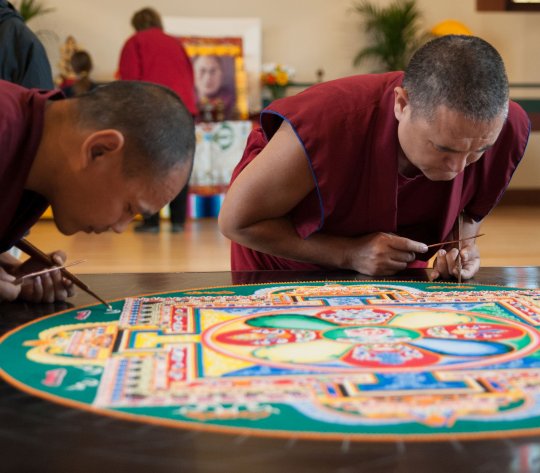 For four days straight in April, seven Tibetan monks bent over a table in Old Chapel to create a mandala from millions of colored grains of sand. After consecrating the area, the monks, from the Drepung Loseling Monastery, worked for 10 hours a day to bring forth the full image. They first created a grid work and then painstakingly added the intricate, multicolored design.

The soft sound of sand falling was the only noise as the chapel became an “oasis,” in the words of Ranjanaa Devi, director of the Asian Arts and Culture Program of the Fine Arts Center, which presented the project. The process was open to the public to observe and meditate, a welcome end-of-semester respite.

After being swept up, a portion of the sand was dispersed into the Campus Pond.

Stand Up and Say No to Indecency

Before reassuring graduates that wrong turns are part of life—he once had a job that bored him so much he napped under his desk—CNN anchor Jake Tapper conveyed a serious message to the 5,500 degree recipients at the 2018 UMass commencement ceremony. He called on them to lead the nation out of a dark period, set a moral standard of which they can be proud, and embrace the humanity of others. At a packed McGuirk Alumni Stadium, Tapper told the graduates, their families and friends, we now live in “a world of social media where every bad impulse, every negative nasty thought, every shallow, glib cut-down can be shared the very moment it’s conceived.” Empirical fact, he continued, is corroding. “People are standing up and saying no to these indecencies. But not enough people. And not enough of those in power. It will need to be your generation that leads this nation out of the darkness.”

In addition to his keynote address, Tapper received an honorary doctor of humane letters. Veteran Len Gardner ’49, who survived the Japanese attack on Pearl Harbor, was awarded an honorary doctor of public service degree. Orthopedic surgeon and sports physician Katherine Coyner ’01 received a Distinguished Achievement Award. Graduating senior Tenzin Dawa Thargay, one of 10 21st Century Leaders, gave the student address. See “In Other Words” for an excerpt from his remarks.

The graduate school conferred 1,948 graduate degrees and the Stockbridge School celebrated its 96th graduation as part of its 100th anniversary.

Around the Pond
Back to top