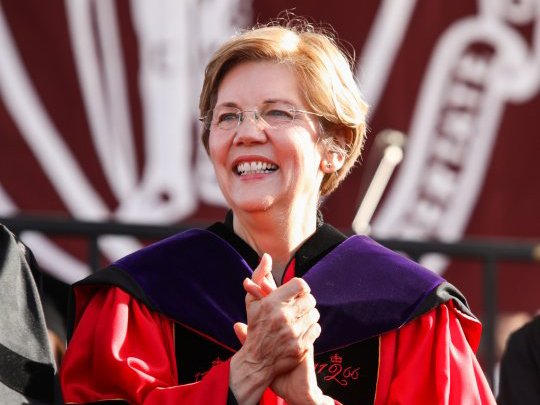 At the UMass Amherst 2017 undergraduate commencement ceremony, U.S. Senator Elizabeth Warren called on members of the Class of 2017 to get involved in issues they care about and fight for them because “it’s no longer possible to assume that democracy will work if most Americans simply wait until election time to learn a little about the candidates and otherwise ignore what’s going on.”

Warren delivered the commencement address as about 20,000 family members, friends, and other guests cheered the approximately 5,500 graduates. 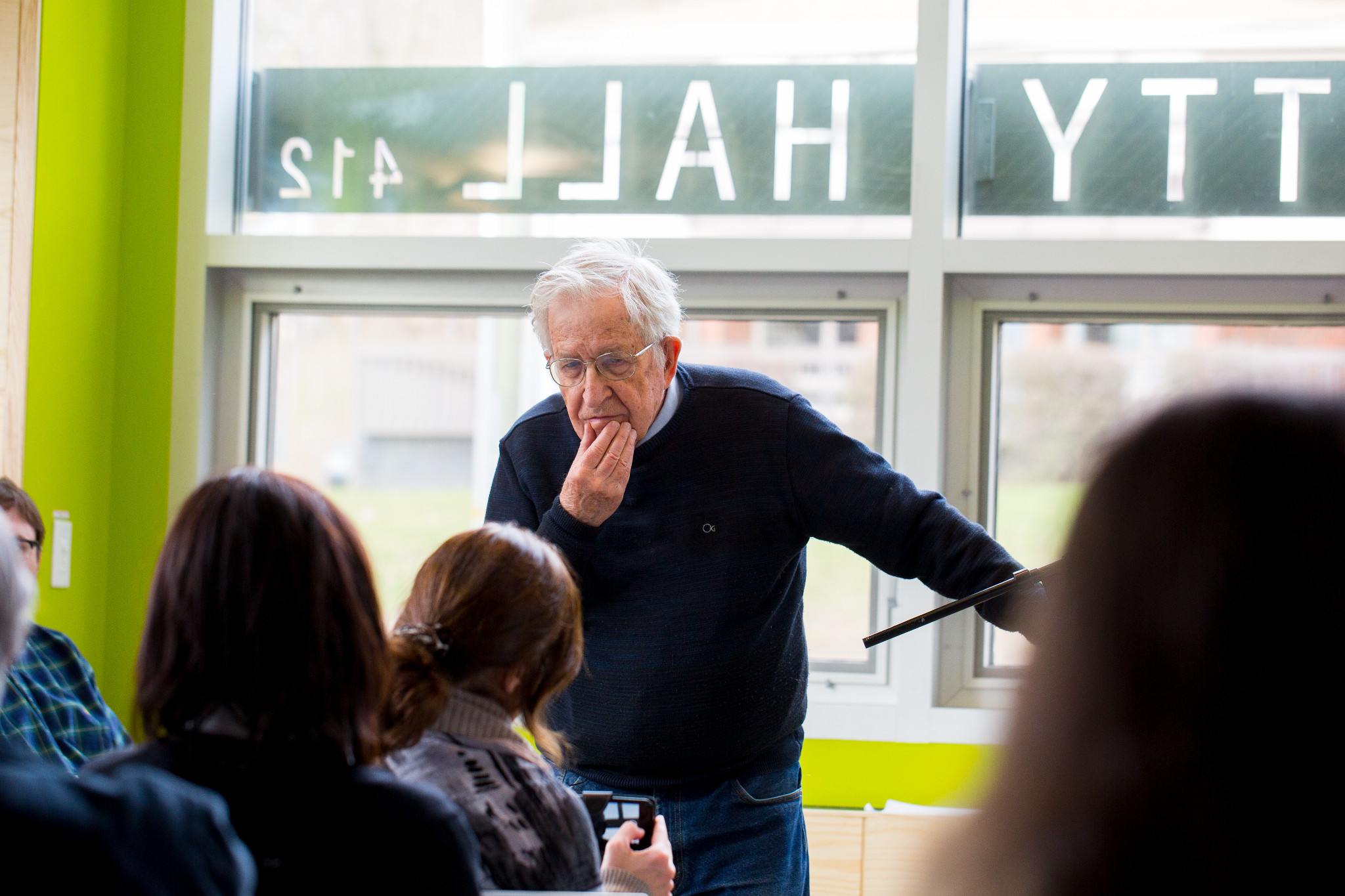 Philosopher and activist Noam Chomsky was at the opening of Crotty Hall, the new net-zero-energy home of the economics department designed by architect Sigrid Miller Pollin of the UMass Amherst architecture department. The Political Economy Research Institute hosted Chomsky, who spoke on “Prospects of Survival.”

Chomsky questioned humanity’s evolutionary viability, given our preference for choosing nuclear proliferation over national security, and the deafness of the United States to the imperatives of climate change. Citing the environmental leadership of countries such as Denmark, Germany, and even China, Chomsky expressed dismay that the United States, from a policy perspective, seems headed in the opposite direction from the rest of the world.

Chomsky took the “information system” to task for ignoring climate change: “After all, it’s only the most important issue in human history,” he said. Yet, he held up the examples of Hawaii, Massachusetts, and San Diego as glimmers of hope for their sustainability efforts. “States and cities,” he said, “have the power to do quite a lot.” 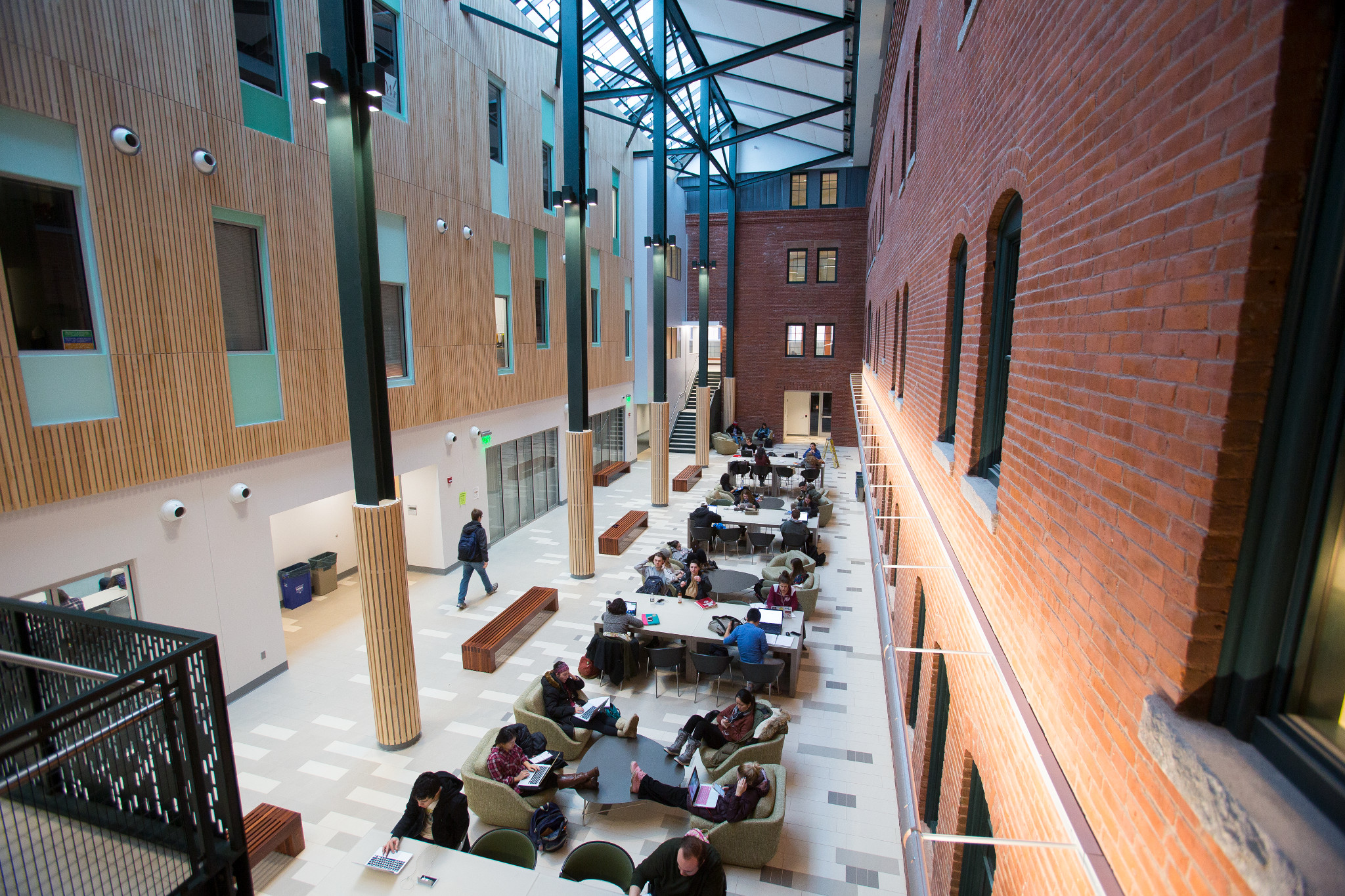 UMass Amherst celebrated the $65 million transformation of South College this spring with a ceremony in the soaring four-story atrium shared by renovated and new parts of the building. The facility, which is 67,500 square feet larger than the original 30,000-square-foot building, opened for the spring 2017 semester and provides a new home for the College of Humanities and Fine Arts (HFA) offices and the departments of English; philosophy; history of art and architecture; and women, gender, sexuality studies.

The building’s graceful blend of old and new embodies the core values of HFA, commented Dean Julie Hayes; it embraces the past while welcoming new ideas of the future.