Why would you climb a glacier to see a bird?

High in the coves of the Quelccaya Ice Cap in the Peruvian Andes live tiny finches—the first bird besides penguins ever documented to nest on ice. And, surprisingly, this discovery was not made by ornithologists, but by a UMass geoscientist and his son.

Doug Hardy, senior research fellow in geosciences, and his son Spencer have been the first to publish well-documented evidence of the white-winged diuca (pronounced dūka) finch’s nesting behavior.

It all began in 2003 when Hardy, who had been visiting the glacier for years to reconstruct its paleo-climate, happened upon fragments of a bird nest 17,000 feet up a vertical ice cliff. He brought photos of the nest back to show to Spencer, then 9 years old and already an avid avian aficionado.

Two years later, Spencer began accompanying his father on expeditions. In 2008, after they found a nest with abandoned eggs still attached to the glacier, the Hardys published their first paper about the bird. When they spied chicks in a nest in 2014, it was the first time any scientist had ever seen such a sight. Last year, Hardy and Spencer, now 24, braved the rapidly melting ice cap with a BBC/PBS camera team for the series Kingdoms of the Sky to get footage of nesting. The father and son have just published a paper about the role that glaciers play in bird ecology. 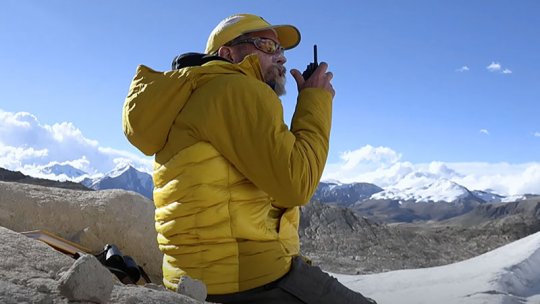 The white-winged diuca finch Diuca speculifera lives in the high Andes of Peru, Bolivia, Argentina, and Chile. The finches’ dependence on glaciers puts them in a high realm of sensitivity to climate change. “The glacier is actively retreating; it is melting and calving, so for the birds it’s like living in an earthquake zone,” relates Hardy. The withdrawal of the ice cap affects the finch’s subsistence as well as habitat: “Since the margin is retreating higher and higher, they have to fly farther from the wetlands, where they collect insects to feed their young,” he explains.

As a geoscientist, Hardy is slightly bemused that he has gotten so much press over a bird. But the life of the diuca finch is a new way of drawing attention to the vanishing ice cap—and showing that all of nature is intertwined.

College of Natural Sciences|Geosciences|Research
Back to top