The Scholar and the Streakers

An Egyptian intellectual. Hundreds of naked students. UMass in 1974.

Long before she was a celebrated feminist, activist, scholar, and novelist in her native Egypt, Radwa Ashour ’75PhD was a UMass graduate student in the newly founded W.E.B. Du Bois Department of Afro-American Studies. The 25-year-old Ashour felt very alone in Amherst at first—so far from everything known and familiar. She found strange “the total greenness of the surroundings” and the women students of the early ’70s in their “tiny cotton blouses hardly as big as your hand.” But before long, Ashour met other foreign students, like her, astute observers of American culture, and she began to feel more at home on campus. Her experience in Amherst and her challenging academic work as the first doctoral graduate of Afro-American studies would influence Ashour, who died in 2014, throughout her life.

In this passage from Ashour’s newly translated memoir, The Journey (Interlink Books, 2018), she describes watching as hundreds of UMass students streaked through Southwest in March 1974. Ever serious, Ashour considers the sociological implications of streaking—but she also enjoys the rowdy UMass scene.

The seven o’clock evening news on television reported that the phenomenon of group streaking had started spreading at universities—students at the University of North Carolina had achieved a record number when more than three hundred male and female students ran around together totally naked at one time. News  reports are for people to listen to, process, and be affected by. So not even one day had passed when announcements were hung all over the university that Southwest, the largest student residence on campus, and Prince House as well, had decided to hold a streaking party. This meant the participants getting naked together, setting off at eleven o’clock at night from their meeting point in Southwest, running together naked to the university Campus Center, going inside, and then returning. The news excited everyone on campus, both those who wanted to participate and those who wanted to watch. As for my group of friends, all of whom were foreign observers of this American scene, we laughed like old folks making fun of young people at a wedding. We thought, “Why don’t we also have our own little party at that time? We can eat, drink, and dance in the classroom that looks out over the Southwest towers and then when it’s time for the event we can look out the window, and participate by watching!”

When I saw my two Iranian friends armed with cameras, I remarked jokingly: “I see that you are going to take some improper photos!” One of them responded with a laugh, “Indeed! Photographs witness a place and a time.”

“Actually, what bothers me the most about these young people being naked for no understandable reason is that they will be exposed to the bitter cold. And tomorrow they will probably all wake up with pneumonia!” 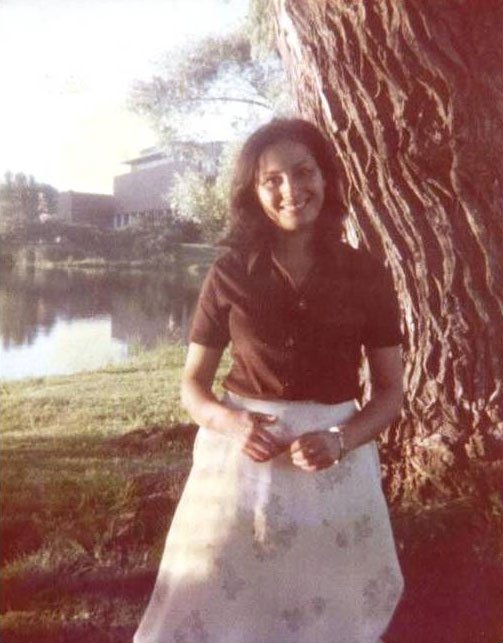 We didn’t discuss it any further and went back to our talking and chatting about other topics, putting aside the main event of the evening until we had almost totally forgotten it.

“They’ve started to appear!” I don’t know who was looking out the window like a control tower operator and gave us the alert, but we circled around to see a huge procession of students, completely naked except for their shoes, jogging from behind the back entrance of Prince House. I wondered if they were jogging because they felt so cold or because they were embarrassed by such an unfamiliar feeling of nakedness. I had never seen anything at all like this, ever. I said, “We should have gone down and looked at them close up.”

Our German friend said, “But it’s really cold!” Laughingly, I responded to him, “You’ve hardly missed anything—if you get ready, you can go down now and run behind them!”

We kept staring at them through the window, commenting on what was happening. Soon Mary and Sheila, who lived on the same floor, came in, boisterous and noisy. Mary said in her loud, husky voice, “What a sight! We put on our coats, went down, and waited for them to come out. We saw them passing by right in front of us!” She laughed with a mixture of nervous emotion and happiness.

“We took pictures of them! Their bodies were all shivering because it’s so cold. Poor things. And the sight of the children-—my God!”

She started chuckling. Sheila was talking to another group about how many streakers she estimated were there. It was clear there were hundreds of them. Sheila said confidently, “No less than four hundred!”

The next day, I was sitting in the English department with the literary theory professor and one of my colleagues, waiting for the rest of the group so we could go to the professor’s house for class. The university newspaper had published a report saying that there were nearly four hundred students. On the front page, they published a picture of a group of naked women streaking. Smiling calmly, the professor said, “A new craze.” I said to myself, What drives these new crazes?

The answer was clear in the next day’s edition of the Daily Collegian, when [the campus director of public safety] was questioned. He replied, “Why should we be worried? The students are enjoying themselves. . . . This is healthy and it is definitely better than that political mania which obsessed them in the sixties.”

The police wanted the students to enjoy themselves in this way en masse because their behavior served a common purpose, whereas when an individual acts out of the ordinary it doesn’t accomplish anything at all. Just two days later the police arrested a student who ran through the university naked in broad daylight. They took him in, gave him a warning, and then released him.

Photo and excerpt reprinted with permission from The Journey: Memoirs of an Egyptian Woman Student in America by Radwa Ashour, translated by Michelle Hartman. Copyright © Interlink Books, 2018.