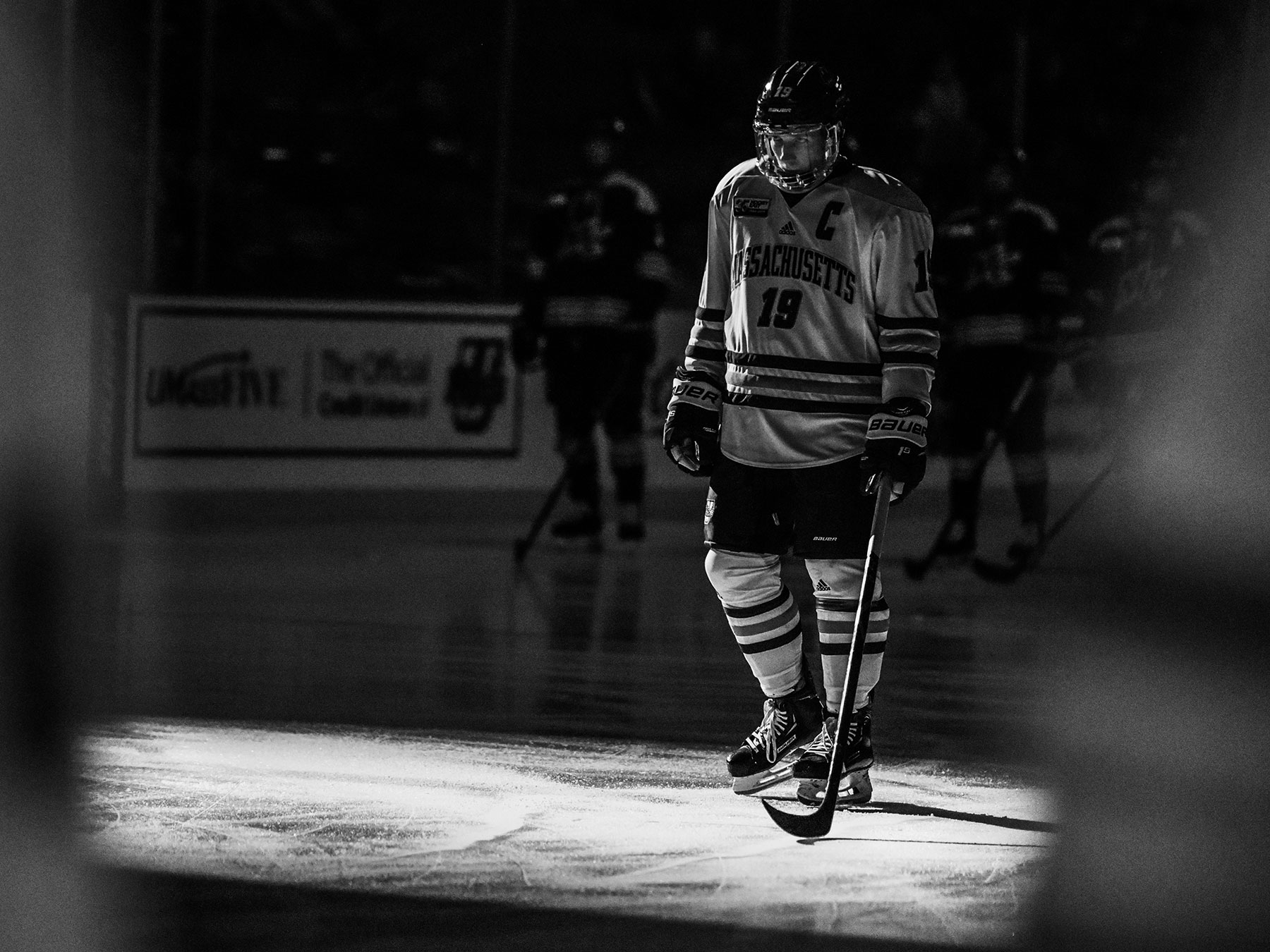 Minutemen hockey Coach Greg Carvel has said he wants his team to “play hard, play together, and be a team that competes every night.”

The Minutemen did just that throughout their spectacular 2018-19 season, finishing with a 31-10-0 record overall. They earned the team’s first-ever No. 1 spot in the national rankings as well as the first Hockey East regular-season title for UMass Amherst.

The Minutemen competed in their first Frozen Four—the NCAA D1 Men’s Ice Hockey Championship Tournament—where they held the top seed in the Northeast Region. The historic season came to an end with a loss to Minnesota Duluth in the championship game.

Above, junior forward Niko Hildenbrand takes to the ice with the focus that made Minutemen hockey a national contender and filled the Mullins Center to capacity. 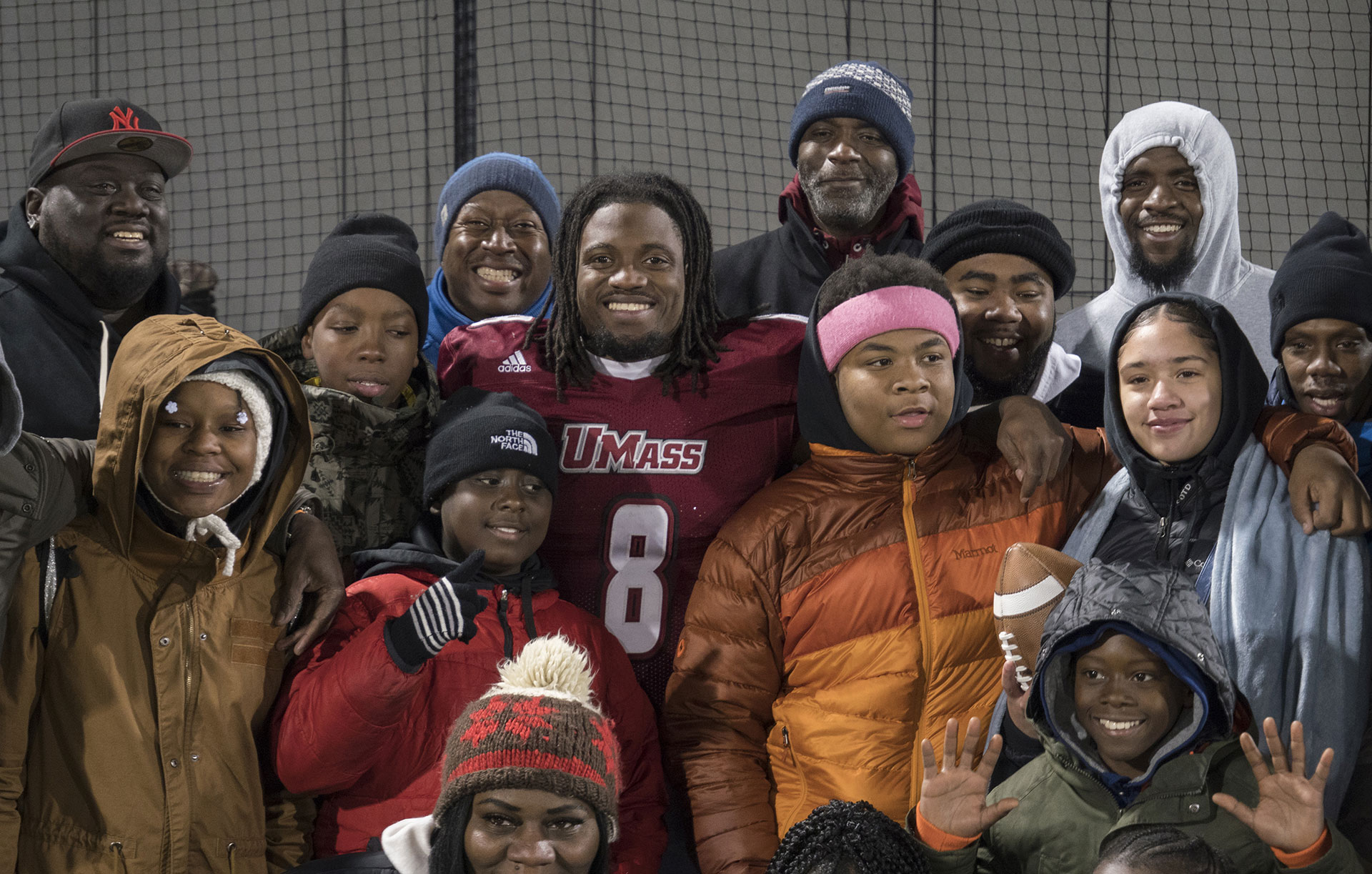 A busload of kids from the Boys and Girls Club of Rochester, New York, traveled to Amherst in November to watch the Minutemen play in the homecoming game and see their hometown hero, senior Marquis Young, run the football. The several hours drive was more than worth it—the game went into triple overtime and Young scored a pair of touchdowns and ran for 148 yards in the UMass win.

To the Rochester kids, Young is a star and a mentor—but he is also one of them. He grew up in Rochester and after his mother died when he was 10, the Boys and Girls Club became his second home. It was a family tradition, he says. “They welcomed us with open arms, helped us build our character, and helped us look forward to our future.”

Young was forced to grow up fast. At 10 years old, he helped his grandmother by earning money doing chores for neighbors and cleaning people’s lawns and shoveling snow.

Working at the club during high school, he was like a big brother to the kids. He says, “I was looking over their shoulders, teaching them how to respect one another, the young women, and their parents. I told them how important it is to have confidence and believe in themselves, not be cocky or arrogant.”

“It was amazing when the kids came to the game. Some of them will never have the chance to see it again,” he says. “I wanted them to see the college atmosphere, the fan base we have, and the band—all that excitement that goes on around a game was something to embrace.
I want them to know anything is possible.”

Young, a psychological and brain sciences major, finished his collegiate career fifth in rushing with 3,631 yards, tied for sixth in rushing touchdowns with 29, a 95-yard run (the second longest in UMass history), and an invitation to play in the East-West Shrine game. He has always wanted to play in the National Football League and that dream is now reachable, he says. “I couldn’t do it without UMass believing in me.”

Young also dreams of making life better for kids growing up in his hometown. “I want to be a part of the change in the atmosphere and environment of my community. I want to be able to communicate with the kids so they can feel comfortable confiding in me because they know I have been through the same things they have.”

Athletics|Sports Talk
Back to top