How did former UMass faculty member Ken Blanchard build a business on praise and positivity?

The most striking trait of Ken Blanchard, leader of one of the world’s top management training companies and the bestselling author of more than 60 books, is his positive outlook. “Life is fun!” he says, as he approaches age 80.  “Life is a very special occasion!”

He brings that glow to his work and his interactions with people, a key reason why his business, The Ken Blanchard Companies, has been going gangbusters for 40 years, and why the book he co-wrote with Spencer Johnson in 1982, The One Minute Manager, has sold 15 million copies worldwide.

Blanchard says he grew up in a positive environment. He recalls, “My mother would say, ‘God didn’t make any junk. There’s a pearl of goodness in every human being. Dig for it and you’ll find it.’” 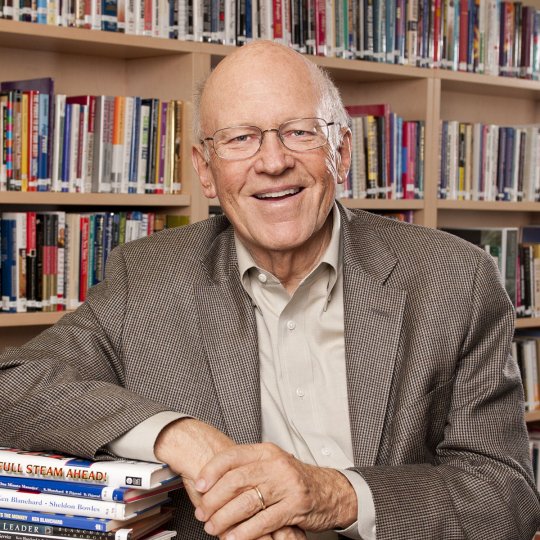 Blanchard believes his positivity was fortified and his creativity enhanced when he taught at the University of Massachusetts School (now College) of Education from 1970 to 1976. He was recruited by the then dean Dwight Allen, known for an unconventional approach to educational reform. “He threw out all the course catalogs. All my courses were considered experimental,” recalls Blanchard.  “UMass taught me about pushing the envelope and not being afraid to stand out for what you believe in. We brought in a whole bunch of wonderful students and we created an environment that was really fun. I had a wonderful time.”

At UMass, Blanchard says, “I got excited to think about taking what we were teaching and making it accessible to everybody.”

While Blanchard taught, his wife, Margie, earned a UMass doctorate in communication disorders. The couple left academia—their confidence bolstered and leadership ideas conceived—and founded their international management training and consulting firm, which is based in San Diego. The company’s six founding associates were all UMass-affiliated: they included former School of Management faculty member Fred Finch, Professor Emeritus Don Carew from the School of Education, and four doctoral students. The company now trains 150,000 managers a year and has offices around the world.

At a party in the early days of their company, the Blanchards met Spencer Johnson, who had written children’s books, and Margie had a killer idea: “Why don’t you two write a children’s book for managers?” she asked. “They won’t read anything else.”

“We decided to write a parable,” recalls Blanchard. In 1982, The One Minute Manager was published by William Morrow and landed quickly on the New York Times bestseller list and stayed for a long ride. An updated 2016 edition, The New One Minute Manager, is also a top seller.

In straightforward language, the book teaches managers to follow a three-point game plan: One Minute Goals, One Minute Praisings, and One Minute Re-Directs. Blanchard’s inherent positivity and his belief that the people we lead are our most important resources permeate the book.

Blanchard says the most significant update in the new edition was switching from a one minute reprimand to a one minute re-direct. “The principles of management haven’t changed, he says, “but people today look at leadership as side by side rather than top down.”

Blanchard’s company grew with the success of the One Minute Manager and the book launched his parable-writing career. He went on to write or co-write 60 more books, including The Secret and Raving Fans. Ken wrote Leading at a Higher Level with consulting partners from his company, including Margie Blanchard. Margie herself wrote several other books and earned her own reputation as a compelling motivational speaker as she worked to build the company with Ken. Today, Margie heads up the Blanchard Institute, a nonprofit devoted to teaching self-leadership principles to middle, high school, and college students.

Ken’s title is chief spiritual officer rather than chairman. He’s still speaking and writing, and leaves a daily morning message for the staff. “I tell them first who to pray for,” he says. “We have faith and nonfaith employees; no one objects to me asking for prayers and support for folks in need. Secondly, I praise people in the company who I am told are doing good things.”

The final part of his morning message is inspirational. “Today’s came from a letter I received from a man from New Zealand who I met in an airport,” says Blanchard. “He told me, ‘The business you are in, Ken, is teaching the power of love rather than the love of power.’ I appreciate that because I think servant leadership, which I hope is my legacy, is love in action.”

Ken and Margie look forward to visiting the UMass Amherst campus this spring to attend the commencement of Kurtis Blanchard, one of their five grandchildren. They have fond memories of living in Amherst’s Echo Hill, renting a Vermont ski house with other faculty families, and the innovative, often tumultuous place that was the School of Ed in the 1970s.

“If we hadn’t been in that environment, we wouldn’t have taken the risk to start our own company,” Ken says. “It’s been a wonderful blessing.”

College of Education|Faculty
Back to top