Inside the mind of a master architect.

What does the energy of a creation look like in someone’s mind, while it is a swirl of ideas taking form? Before it is put down on paper or sculpted into space and time? 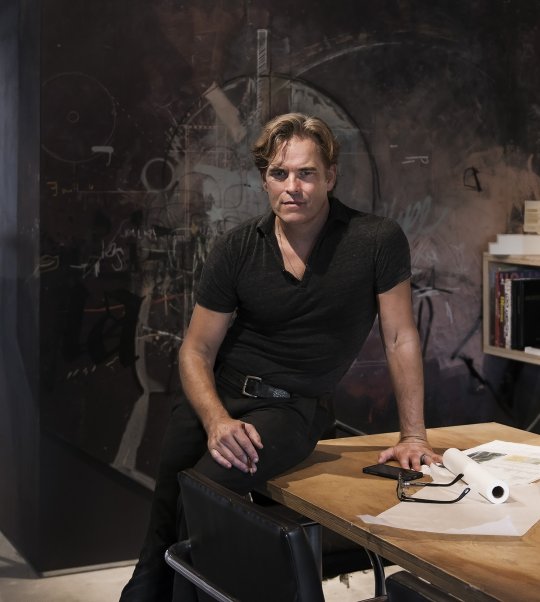 Tighe in his Los Angeles studio.

UMass Amherst alum and architect Patrick Tighe ’89 has created an exhibition of his work that reveals the energy of his artistic process.

Over the last 12 years, Tighe has swiftly become one of the preeminent architects in Los Angeles. After graduating with a BFA from UMass Amherst, Tighe earned his master of architecture from the University of California, Los Angeles, and then went on to work with such renowned architects as Frank Gehry before establishing Tighe Architecture, of which he is the principal and lead designer. Tighe is the author of Out/West (ORO Editions, forthcoming 2018), an anthology of residences he has designed; a diverse set unified thematically by their location along the Pacific coast.

Tighe has made the visions of his built structures for the Southern California landscape, as well as concepts for Helsinki, Beijing, and Tangier, into large impressionistic collages. He recently exhibited these at the gallery operated in New York City’s Chelsea neighborhood by the College of Humanities and Fine Arts’ New York Professional Outreach Program (NYPOP) and in a 2017 show on campus at the John W. Olver Design Building. Yet if you didn’t know what the collages refer to, you might perceive them as self-contained pieces.

The art collected in Tighe’s Re-Drawn exhibition returns architecture to its inception point. The 2-D works assemble quotations, photos of previous structures on a site, representations of social and cultural factors, paint, and line drawings into unique compositions. The pieces evolved from the manner in which Tighe and his team, at work on a project, would create from maps and sketches. The finished pieces are “very personal,” he says, made by his own hand. They are like vision boards that have acquired their own life.

Looking closer at the details, you realize that you are looking at buildings, yet not literal depictions of buildings; rather, their essences—the essence of each whole project from start to finish, collapsed in time and injected straight into your awareness. 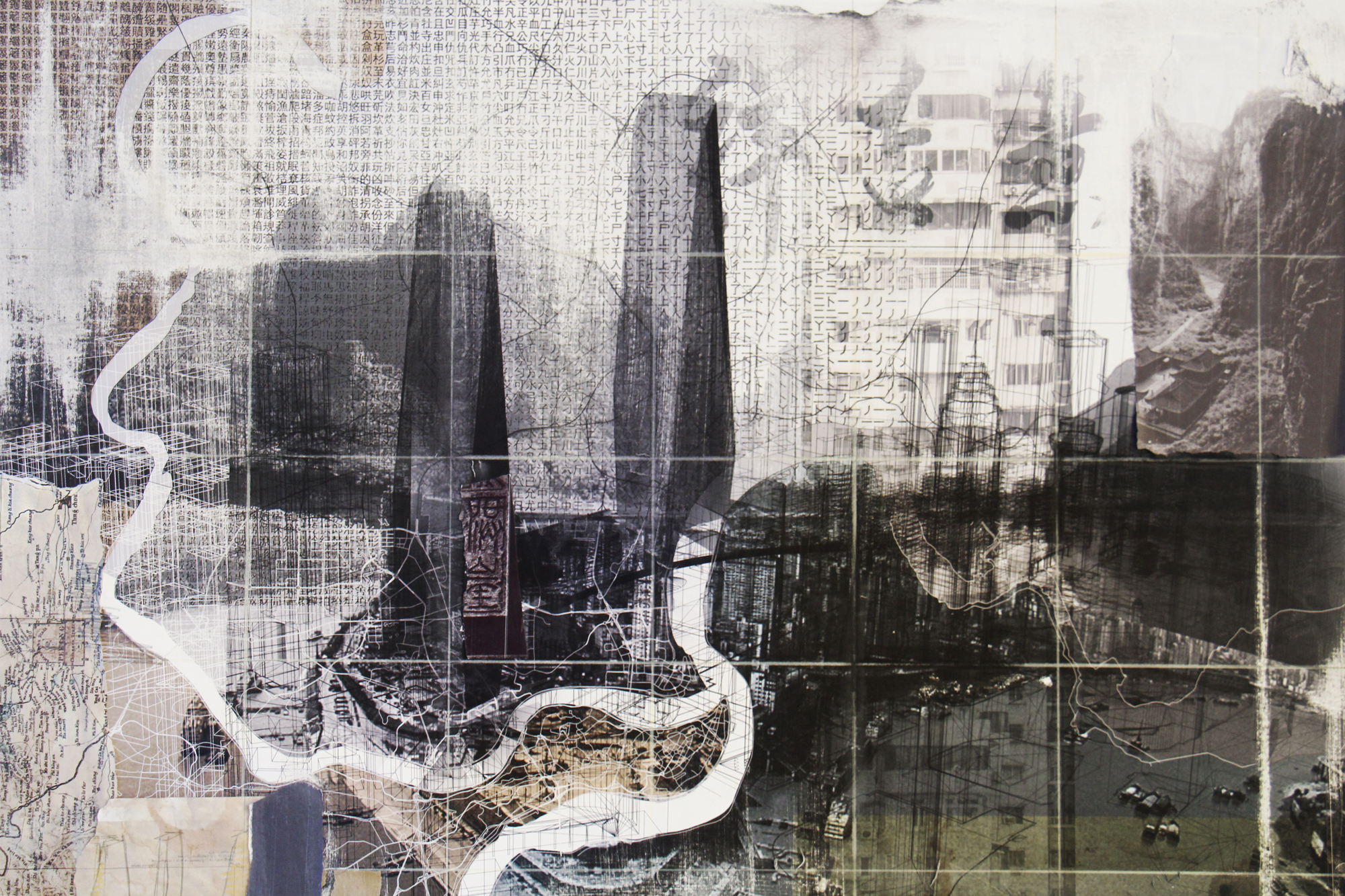 To create the collages, Tighe actually works backward, removing the modifications to each design’s original DNA. “When you build a building,” comments Tighe, “there are lots of physical constraints, such as budget, the site, the client. So the drawing is a fresh approach where there are no constraints at all, and you can do whatever you want. It’s an expression of everything we built in the project, but it’s also a culmination of ideas, aspirations, opportunities. It’s a way to ground an exhibition that’s partially based in reality and also based in an idealized vision of what the project is, was, or could be. It’s a new way of looking at architecture.”

Tighe enlisted his fine arts background, using the collages as a creative way to reassess his work. “It’s a chance to make something beautiful, an opportunity to synthesize what we did, to document the process, to make new discoveries with our drawings,” he says. “It’s nice to have the luxury to come back later to rethink architecture in a different way.”

Into the Real World

With all the external factors impinging on a building’s creation, is architecture more of a problem-solving craft or a visionary art form? For Tighe, it’s a fusion.

First of all, a design does have to be practical enough to be buildable. Yet it is important for Tighe that he keep enough space for the sheer play of creativity. “We are a design firm, so if it doesn’t have good design, what’s the sense?” he offers. “I’m not interested in doing mundane architecture. If a project becomes all about just the practical planning, then it doesn’t lead to good architecture.”

A genius outcome arises from the friction between external parameters and the energy of the driving vision. “It’s hard to get things built that are unique, or different, or special,” he relates. “It takes so much extra effort to get it done in a way that, afterward, it rises to an even higher level. I think that’s the struggle a lot of architects have: we fight a little harder to get it done so we get the extra punch out of the project. 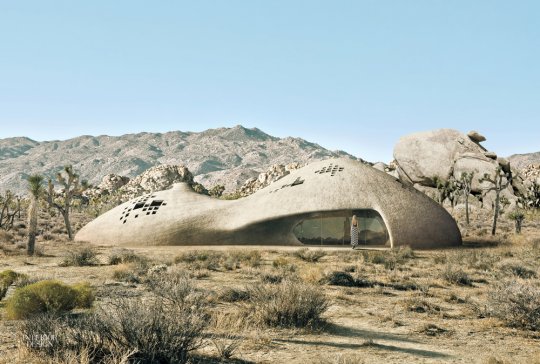 “Architecture works on different levels,” continues Tighe. He credits his firm’s success to its resolve to create buildable structures, while at the same time, being very good “at throwing curveballs.” For instance, a businessman’s retreat that Tighe’s firm built in Joshua Tree is constructed primarily of spray-on foam: since the Mojave Desert location is so remote, it was prohibitive to get many trucks back and forth or maintain a building site. Tighe innovated by simplifying the process, using one primary material in the house’s construction. So the house’s singular, sculpted beauty—which looks as though it could have landed from space or emerged from Earth—arises from the solution to a problem. The house has gone on to win Best of the Year from Interior Design and an R+D Award from Architect magazine.

Tighe has taught and lectured in architectural forums around the world. He is on the faculty of the University of Southern California School of Architecture and recently completed an engagement at the Université Tunis Carthage. But no matter what country, Tighe observes, the rising generation of architects he meets has resoundingly similar concerns: sustainability, smart building, the incorporation of green technology and materials, and social awareness top the list. These concerns inform Tighe’s own work: “For instance,” he says, “housing in L.A. is something that’s needed—very much so! So we do a lot of mixed-use projects and projects for nonprofits.” Tighe’s firm has received high honors for its work in the affordable-housing sector and also specializes in creating housing for people with disabilities.

Over his professional life, Tighe has amassed a formidable list of professional accolades. He has shown at the Istanbul Biennale, the Venice Biennale, and the Biennale of Architecture in Buenos Aires and has been featured in Architectural Digest, the New York Times, and the L.A. Times Magazine. Yet he finds the work, with its continuing opportunities to innovate, its own reward. “Awards are great to get and they do help: they offer a legitimacy that propels the work to evolve at that level or bigger.” Awards mark the past: “I’m always pushing to get the stuff that we haven’t done yet right. So I can’t really relish the award because I’m pushing toward the future. An award for me would be getting a commission for a great building, something that would propel the office forward.” He smiles: “Maybe a building at UMass?—that would be great.”

Tighe’s objective continues to be what it has been: to keep evolving his approach to his craft. “I’ve been doing this now for 12 years, and the projects have become more substantial. But it’s not so much about growing a huge practice or doing huge projects as it is about investigating building types that we have not done yet and creating meaningful architecture. That’s what I’m interested in.”

The West Is the Best

Joshua Tree. Malibu. Santa Monica. Melrose. Sunset Boulevard. The Hollywood Hills. Tighe’s designs can be found around the globe, yet his body of work is most identified with Southern California, where he makes his home. What continues to draw Tighe to the West is the freedom it offers, what Jack Kerouac (like Tighe, also a native of Lowell, Massachusetts) calls in On the Road “the smoke and goldenness of the late afternoon of time.”

“L.A. was a chance to experience something new and different from what I had already known,” Tighe explains. On a practical level, he enjoys the ease that the climate bestows to building projects and also the flow between indoor and outdoor space that it allows him to create in design. Artistically, he responds to the same untamed horizon that has drawn legions of creators toward the Pacific coast: “L.A. has a lot of history, and the architecture can respond to that,” he says. “Yet L.A. is also a place where you can disregard all that and do your own thing. It doesn’t have to be contextual, and it doesn’t have to fit in. It’s a great place right now to practice architecture.” 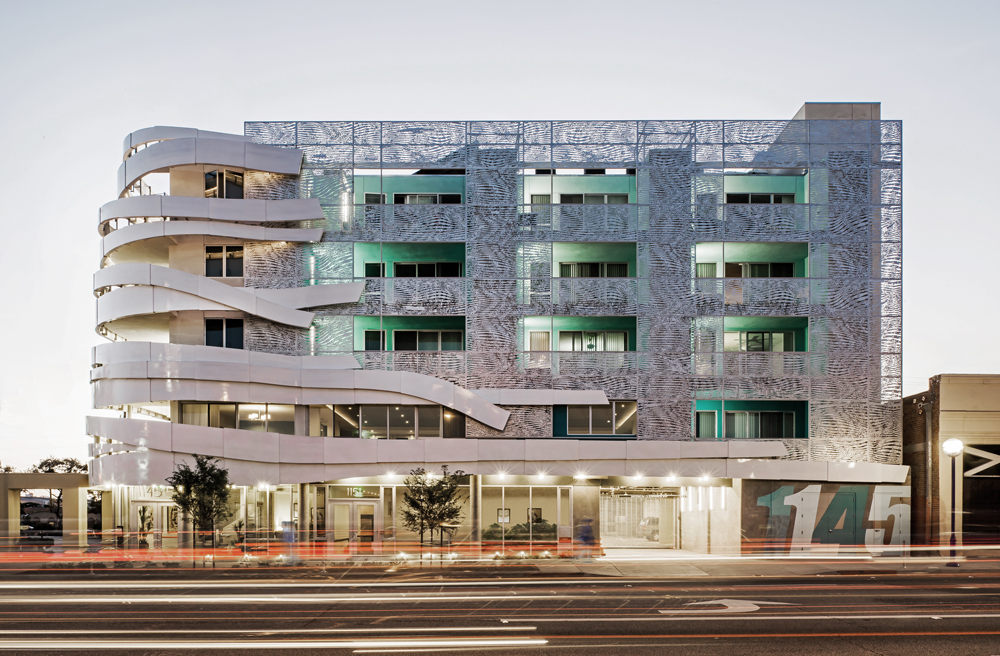 One example of Tighe’s response to the urban landscape is his design for the Courtyard at La Brea, a mixed-use, affordable housing project for formerly homeless LGBTQ young people in West Hollywood. With its corner wrapped in ribbons of aluminum, the building’s attention-grabbing presence reflects a strong social purpose. “The client (West Hollywood Community Housing Corporation) wanted to create an iconic building,” relates Tighe. “Bits and pieces of L.A. come through, such as the density of the city.”

The La Brea project is connected spatially to its environment in a way Tighe hopes its inhabitants can feel. “A lot of our projects are experiential; that’s something we’re interested in.” La Brea is no exception. “It’s a housing project for the formerly homeless, so the units are safe, and they’re welcoming, and they’re simple. The entry is an outdoor space that extends over the interior and over the street. It’s an enclosed space, but it’s an outdoor space,” he explains. “It’s a big transition to go from living without a home into a new place.”

From imagination to realization, a closer look at Patrick Tighe's work. 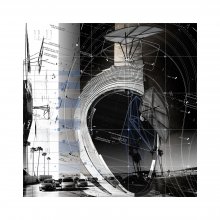 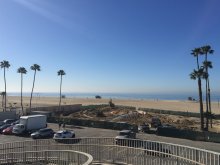 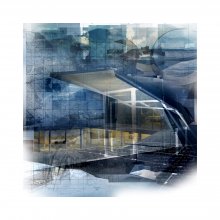 Image at top of page: La Vela/Sunset Boulevard, by Patrick Tighe, 2017. This concept to maximize surface area for a billboard doubling as a lookout over Los Angeles is the architect's riff on ideas of projection and display.