Journalist Charles Sennott finds the story in the midst of turmoil.

From the Boston offices of The GroundTruth Project, Charles M. Sennott ’84, a veteran foreign correspondent and UMass Amherst alum, Skypes with a young American journalist on assignment in the Middle East. Their monthly online check-in is casual, with updates on assignments and deadlines, then turns tense as the reporter describes an encounter with a border guard who rifled through his notebooks.

“They have no right to intimidate you or make you uncomfortable and definitely not to go through your notes,” says Sennott. He then offers the reporter more advice on handling potentially dangerous situations and recommends he file a complaint with the Committee to Protect Journalists, the nonprofit group that fights for press freedom.

Sennott has this young reporter’s back. And through The GroundTruth Project, a nonprofit foundation he created in 2014, he is leveraging his decades of experience reporting from conflict-ravaged countries to train many more correspondents and documentary filmmakers to tell stories about critical global issues—from violence to climate change to pandemics. “A lot of people gave me mentoring, funding, time, support, encouragement, and tough editing. I want to give all of that back. That is what drives me at GroundTruth,” explains Sennott. The organization takes its name from NASA’s satellite imagery calibration process. When NASA measures locations with a satellite, a staffer on the ground takes the same measurement, called “ground truth,” which prevails in a discrepancy.

As GroundTruth’s executive editor, Sennott’s goals are no less than keeping the world informed through the free press and keeping members of the press safe in places that have been death traps for journalists. For Sennott, GroundTruth is personal: The safety of reporters keeps him up at night and his cell phone by his side 24/7. “I worry about people in the field every day of my life,” he says.

GroundTruth’s small staff shares comfortably cluttered offices with the classical music personnel at WGBH headquarters, the flagship PBS station in Boston. Despite its small size, the operation has a big impact: It has trained 120 journalists, called “fellows,” to date. The work of the fellows is posted to the GroundTruth website and distributed by such outlets as PBS NewsHour, PRI’s The World, ABC News, MSNBC, and across public television and radio. Staff members serve as editors, working with fellows to develop and shape stories, then finding outlets for the work. Other staffers support day-to-day operations.

In 2016, GroundTruth dispatched 35 reporters, photographers, and videographers to 25 countries, from Brazil to Egypt and to under-covered corners of America. For a series on climate change called “Living Proof,” one reporter went to the Philippines to interview women displaced by a typhoon and surviving on sex work. Another went to Puerto Rico to the baby shower of a pregnant woman awaiting the results of a test for the Zika virus. In Arctic Scandinavia, a GroundTruth reporter investigated a suicide epidemic among reindeer herders.

Kathy R. Forde, chair of the UMass Amherst journalism department, calls Sennott’s work “pathbreaking.” Forde says, “GroundTruth is unique in being an actual news organization actively engaged, not only in global reporting, but also in advocating for a culture of safety for conflict journalists.” She says GroundTruth further stands out for its advocacy of social justice. “Being an independent news voice doesn’t mean one has to be neutral in the face of social injustices and violations of human rights.”

GroundTruth teams produce traditional, objective, third-person-point-of-view journalism using the latest communications technology—old media hitched to new media. “Our journalism is a collective where everyone is pitching in to tell the story,” says Sennott. This spirit prevails in the GroundTruth office where Sennott’s sonorous voice demands attention as more of a collaborator-in-chief than commander-in-chief.

“Charlie listens to us and respects what we have to say. People feel empowered,” says Rachel Rohr, digital editor. Frank Dutan ’16, a paid GroundTruth intern, says he had autonomy when working on “YouthVoices,” a project to capture opinions of teenagers, and turned to Sennott for help fine-tuning his reporting. “Charlie trusted that I was a capable journalist,” recalls Dutan.

The best-known product of GroundTruth’s collaborative approach is the award-winning “Foreverstan: Afghanistan and the Road to Ending America’s Longest War” (2015), a yearlong project that showcases films, podcasts, written features, and photo essays. “Foreverstan” illuminates both hardships and hope in Afghanistan, including stunning photography by photojournalist Ben Brody ’12 and revealing interviews and evocative writing by Sennott. Here Sennott describes the Qala-i-Jangi fortress: “At the center of the fortress’s south courtyard, there is a Scotch pine tree that the Taliban used as a machine gun nest during the uprising. The tree is now dead, riddled with machine gun rounds and barren of all its leaves. Its gray, lifeless branches reached up like bony fingers to a stunningly beautiful blue sky on a gorgeous spring morning.”

GroundTruth’s in-depth investigation of Afghanistan came when many news outlets had moved on to covering the Arab Spring and other conflicts. “One thing we never want to lose is the concept of ground truth and how to be there on the ground and telling the story,” says Sennott. That means giving young journalists new prospects for foreign assignments in an era when many news bureaus in far-flung corners of the world have closed. More recently, it also means expanding its coverage in the United States to areas as different as Appalachia and the Arctic.

GroundTruth teaches reporters what they can’t learn in a textbook or journalism class: how to develop a news sense, how to recognize when their instincts are falling short, and how to critically self-analyze. GroundTruth reporters also must undergo safety training, which encompasses situational awareness, risk assessment, and first-aid procedures, including the use of a military-grade tourniquet.

The need for a tourniquet or the loss of a colleague are not hypothetical. Sennott was a friend and colleague of journalist James Foley, who earned a UMass Amherst MFA in 2003. Foley worked as a freelancer for the precursor to GroundTruth, GlobalPost, and was kidnapped in northern Syria in 2012 and beheaded by terrorists in 2014. Foley’s murder galvanized Sennott and others to create safety principles and practices for journalists in conflict zones, especially those working independently.

“I worry about people in the field every day of my life.”

Sennott also wrote a GroundTruth field guide that serves as a grim reminder of the hazards of conflict reporting. One passage reads: “Journalists should leave next-of-kin details with news organizations, ensuring that these named contacts have clear instructions and action plans in the case of injury, kidnap, or death in the field.” GroundTruth board members, young reporting fellows, and veteran correspondents contributed “lessons learned” to the guidebook. Sebastian Junger, a board member and prominent war correspondent, offers this advice, “I always have a flashlight, a folding knife, and a cigarette lighter in my pocket. Never bring a compass, binoculars, or two-way radio to a civil war; inevitably someone is going to accuse you of being a spy.”

Sennott encountered his share of dangerous situations during his 23 years of international reporting when he covered the first Gulf War, the U.S. invasion of Afghanistan, the war in Iraq, the troubles in Northern Ireland, the drug cartels in Columbia, and terrorism in and around Israel. As a correspondent covering the post-9/11 conflicts around the world, he says, “I felt very purposeful. I did calculate the risk and kept coming up with ‘yes, this is worth it.’” His swashbuckling days of covering active war zones—he once had to expense a horse to the Boston Globe so he could travel across a river to get to the front lines in northern Afghanistan where no motorized vehicles could reach—are behind him, but he is adept at using his experience to serve and inspire the next generation of journalists as a teacher, friend, creative director, entrepreneur, and fundraiser.

Sennott’s own beginnings as a journalist were as a high school student in Sherborn, Massachusetts, when he landed a job in the news department of a country blues and bluegrass station in Cambridge. He enrolled at UMass Amherst for the quality of its education and affordability. His father had recently died, and Sennott, a first-generation college graduate, knew he would have to pay his own way. A history major interested in European intellectual history, he took advantage of all the campus had to offer: he enrolled in a Five College Consortium class with legendary writer James Baldwin and a jazz history course with drummer Max Roach. He studied abroad in Spain and honed his reporting skills at WMUA, the student-run radio station. He landed his first full-time job as a reporter at WFCR (now NEPR), the UMass-supported public radio station in Amherst, and the first story he covered was his own graduation.

After a few years in radio, Sennott attended Columbia University’s Graduate School of Journalism and soon after became a police reporter for the New York Daily News. “I covered local stories but was always thinking globally,” he says. He was working his beat in February 1993 when a bomb exploded below the World Trade Center. The question of who would want to blow up the New York City landmark dogged him as he joined the Boston Globe later that year. Four years later, he was named Middle East bureau chief, and the hot zone became home base for Sennott, his wife, Julie, and their newborn son, William, who is now a sophomore at Commonwealth Honors College at UMass Amherst.

Eventually, too many bomb blasts too close to his children’s Jerusalem schools forced Sennott, by then the recipient of many journalism awards for his reporting on complex international issues, to seek reassignment to a safer London. In 2006, he returned stateside with Julie and their four sons. On a Nieman fellowship at Harvard, Sennott contemplated his next career move. Tapping into his entrepreneurial spirit, he cofounded GlobalPost, a for-profit company with 70 reporters in 50 countries. After five years, Sennott realized that the advertising-supported, for-profit model was not sustainable, and so he created The GroundTruth Project. Eighteen months later, GlobalPost folded its operations into PRI’s The World, owned by WGBH.

GroundTruth has had remarkable success, garnering nearly $7 million in grants from the Ford, MacArthur, Henry Luce, WGBH Educational, and Kaiser Family foundations, and others. The 2016 budget totaled $1.84 million, with 80 percent earmarked for programmatic costs and the remainder for administration. Its correspondents’ works have been praised for their excellence. The “Foreverstan” coverage of a girls’ school in Afghanistan won the prestigious Alfred I. duPont-Columbia University Award in 2016.

Like a marathoner hitting his stride, Sennott has set the pace for the next miles of GroundTruth’s journey: to investigate the big issues of our time, focusing on global climate change, free trade, immigration, and wealth inequality. “There is a need for ground truth in America,” he says, “and we think we are uniquely poised to be a game changer in media.”

Photo credit (top): On assignment in Afghanistan in 2007, Charles Sennott reports on a meeting among community tribal leaders, U.S. Military, and the Afghan National Army in the Kunar Province, near the Pakistan border.  Photo by Gary Knight. 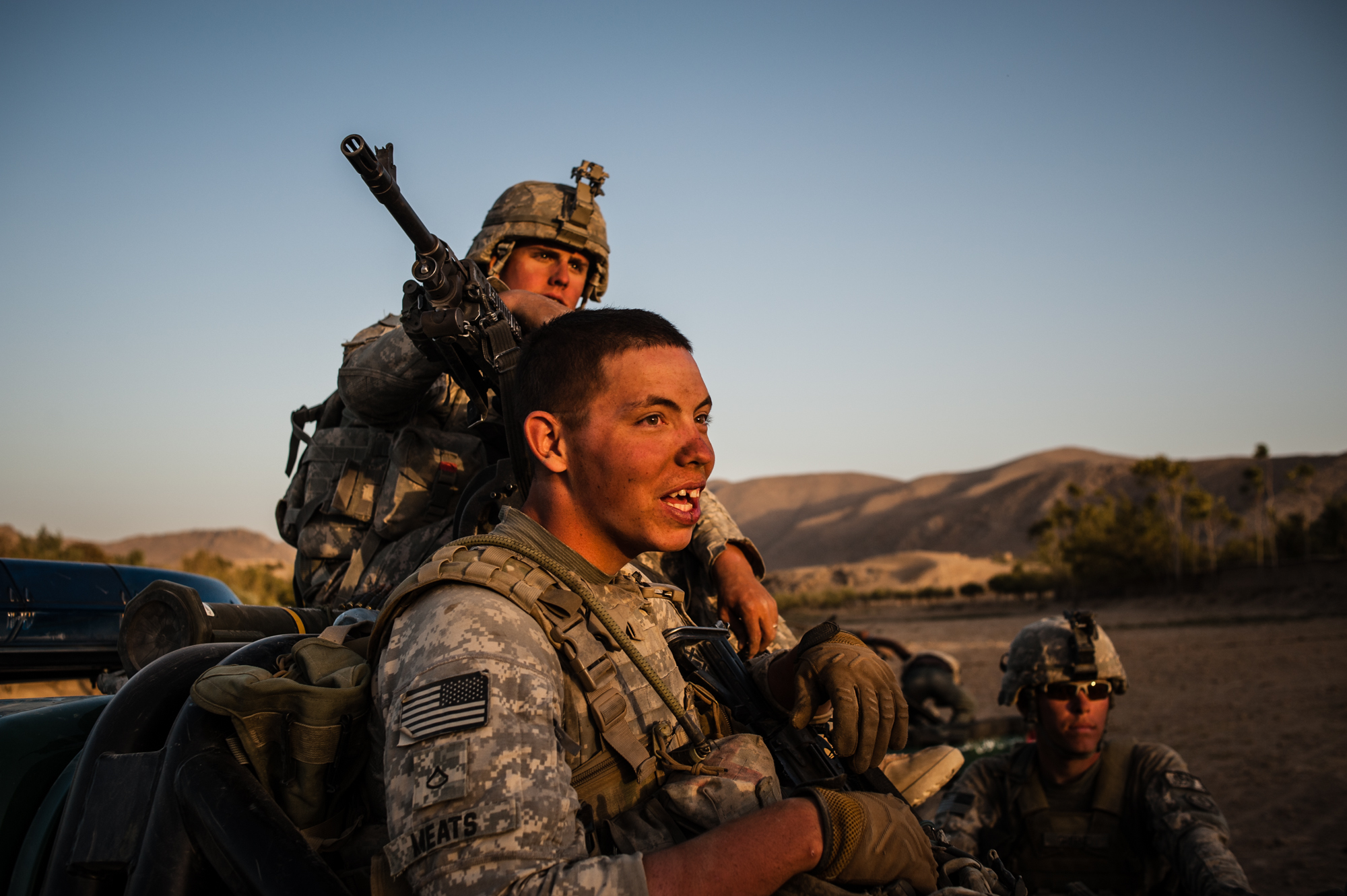 Photojournalist Ben Brody ’12 took the photo above and this issue’s cover photo in Afghanistan while working for The GroundTruth Project and its precursor, GlobalPost, and earning independent study credit toward his UMass Amherst degree in journalism. Brody had previously served two tours of duty in Iraq as a combat photographer for the U.S. Army.

Brody’s photo, part of a collection called Endgame: Afghanistan, depicts three soldiers who have returned from fighting their way through a complex ambush high in the mountains. Brody writes, “A soldier’s first real firefight, where the outcome is not certain, is something that affects each person differently. For everyone, though, it is the central rite of passage in the U.S. Army.”

To read about Ben Brody and see more of his photographs, click here »

Alumni|Journalism|Web Extras
Back to top