David Ogletree ’85, one of the last organ students to study organ performance at UMass Amherst, is bringing the instrument he loves into the future.

While he was a UMass Amherst music student, David Ogletree ’85 found offbeat use for his spare time. He bought a broken down electronic Baldwin organ that was gathering dust in a campus warehouse, dragged the giant console up the stairs to his North Amherst apartment, and rebuilt it.

“I took it apart, changed the capacitors, fixed the drivers, and rewired it,” Ogletree recalls. “I had a great time.”

Today, with his business partner, Doug Marshall, Ogletree is building a much different kind of organ. The digital instruments they craft at Marshall & Ogletree in Needham, Massachusetts, are pulling the venerable pipe organ into the 21st century and putting other electronic organs to shame.

The pipe organ is a magnificent creation. Each one is unique, designed for the building where it resides. It is capable of producing a vast variety of sounds through thousands of pipes. Its mechanics are an incredibly intricate combination of a wind instrument and a keyboard instrument. In fact, no mechanism was as complex as the pipe organ until the advent of the telephone exchange, says Ogletree, a student of organ history as well as of organ music.

But the complexity and sheer size of pipe organs also make them prohibitively expensive, with building costs of several million dollars and high maintenance costs on top of that. “I’ve always loved the pipe organ but was frustrated by the fact that it was architecturally immovable,” says Ogletree. “If the organ as an instrument is going to survive, it needs to move forward.”

It takes a maverick with both artistic and mechanical talents to move the organ forward. David Ogletree began to develop these talents and his passion for the organ as a boy in Westwood, Massachusetts, when he started organ lessons at age 11. His playing earned him a Chancellor’s Talent Award to attend UMass Amherst on a full scholarship. He was one of the last organ performance students on campus, studying with Ernest May, an organist and professor in the Department of Music and Dance.

May, now a professor emeritus, recalls that Ogletree liked to play at a fast tempo, against the grain of the “purist” New England style. As a performer, May says, “David was particularly attracted to the large symphonic organ in John M. Greene Hall at Smith College, where he played some amazing, fully memorized recitals of nonstandard repertoire. He is a virtuoso organist.”

While at UMass, Ogletree also developed his audio know-how as a salesperson at Tech HiFi on North Pleasant Street. “Those four years were wonderful because I felt very free to explore my art and my craft,” he says. He went on to graduate study at the highly selective Curtis Institute of Music in Philadelphia.

At a summer job at a stereo store, Ogletree met Doug Marshall, a fellow concert organist and audiophile who had studied with the renowned organist Virgil Fox. They shared an interest in making great organs more accessible, and after a time, formulated an audacious goal: to build organs that rivaled the best pipe organs in the world, but were digital in design.

Recording sounds from 150 or more organs and configuring the technology for the digital organ was a long and painstaking process. The first Marshall & Ogletree organ (Opus 1) was completed in 2003 for the historic Trinity Church in New York, which had been heavily damaged by the 9/11 attacks. The church’s daring decision to go digital was a success and more commissions—and technological improvements—followed. Marshall and Ogletree are currently at work on Opus 13 for a large church in Arlington, Texas, and on Opus 14 for a Greenwood, South Carolina, church.

Opus 8 is known as the ITO, the International Touring Organ. A fully portable instrument, it was commissioned by Cameron Carpenter, a young rock star of the organ who performs at leading venues around the globe. When Carpenter debuted the ITO at Alice Tully Hall in New York City in 2014, Anthony Tommasini, chief music critic for the New York Times, proclaimed its sound “quite terrific.” Carpenter, who has played the world’s greatest pipe organs, praises the ITO for giving him more precise control over his music and calls it “the most musically versatile of the world’s great organs.”

With the ITO, Carpenter writes, Marshall and Ogletree have made a leap that “forces casual and astute listeners alike to reconsider much about the organ in general, let alone any preconceived concepts about what a digital organ can or cannot be.”

May weighs in: “I am convinced that there is tremendous accomplishment and even greater potential in the latest Marshall & Ogletree organs. They are at a wholly different—and higher—level than any ordinary commercial electronic organs. The quality of the sound is astonishing!  However, the technology is disruptive and will doubtless face opposition from traditionalists.”

To help win over doubters, Marshall and Ogletree are putting together a collection of recordings of the same pieces of music played on their digital organs and on comparable pipe organs. The head-to-head comparison, predicts Ogletree, “will shock a lot of people.”

To further demonstrate the powers of the digital organ, he takes the short drive from the Marshall & Ogletree headquarters to St. Paul’s Episcopal Church, in Dedham, Massachusetts, the home of Opus 12. Ogletree sits at the oak console in St. Paul’s and plays. His hands fly over the three keyboards and pull out the stop knobs, his feet dance over the pedals. The music fills the church, moving from your eardrums and flowing through your entire body to the tips of your fingers and toes. The music varies from soft to loud, low to high, at one moment reminiscent of a trumpet fanfare, at another like the gentlest of bells. The digital organ commands the sacred space.

For David Ogletree, this is the sound of a dream fulfilled. 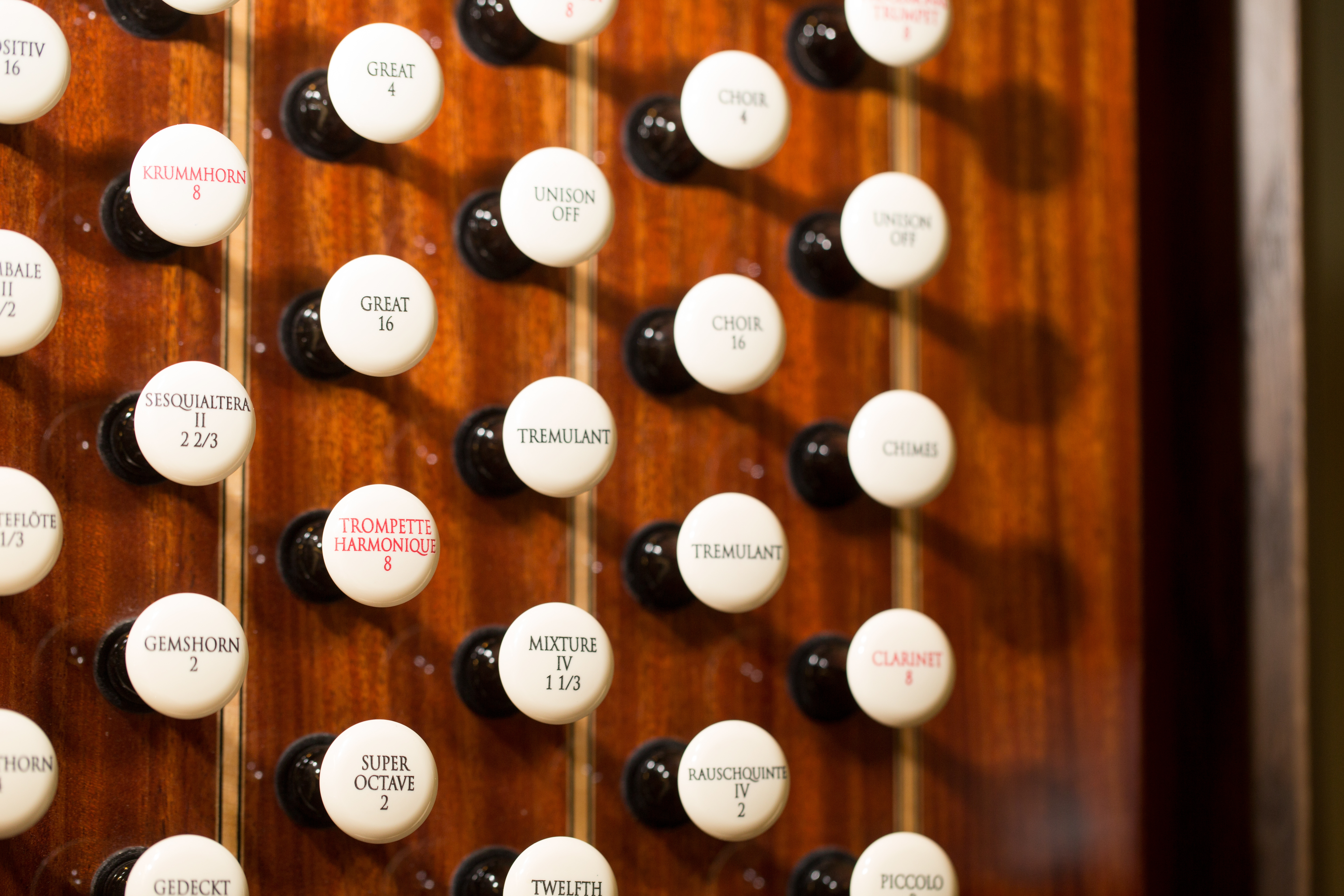 Stop knobs of a digital organ.