Guardian of the Everglades

A walk in the swamp with Pedro Ramos ’90

“We’re going on a swamp walk. You have to get intimate with the Everglades to truly appreciate it.”

On a bright fall morning, we drive a few miles past palms and pines down the main road from Ramos’s park headquarters office—which is next to the Ernest F. Coe Visitor Center—and pull to the roadside. We step out of the car, grab sturdy walking sticks, and head for a wall of trees. Three steps later, the cool and surprisingly clear water covers my sneakers and Ramos’s regulation National Park Service leather lace-ups. Five more steps and we’re knee deep. In a few more strides the water is thigh high. We’re exploring a cypress dome—the main park road is out of sight and the gray trunks of cypress are towering around us. Wary of alligators, I tread carefully. I expect to find just muck and bugs, but instead, I see a profusion of air plants (Tillandsia) growing on the tree trunks as we skirt ferns the size of SUVs. I hear only our faint splashes and a woodpecker. The limestone, under a cushion of fallen cypress needles, is hard beneath our feet. Any gators or snakes have skedaddled. “They know we’re coming,” Ramos assures me. “Our biggest danger here is tripping and getting wet.”

Ramos points out some of the aptly named flora and fauna in this unique ecosystem: a spinning whirligig beetle; the jagged edges of the sawgrass; and a rounded, root-like cypress knee. He shows me a soggy handful of periphyton—a spongy green-brown mass filled with tiny organisms that form a vital link in an Everglades food chain.

This cypress dome is just one of the otherworldly habitats of the Everglades, which are home to an astounding variety of plants and animals. From its rivers of grass to its tangled mangrove forests, many threatened and endangered plants and animals live here, such as the West Indian manatee, the Florida bonneted bat, and 66 species of plants native to the park that are considered to be critically imperiled in South Florida.

On this swamp walk, Ramos points out features of this wet wonderland and enjoys a brief respite from his office and his responsibilities—which, without exaggeration, are as big as all of South Florida. 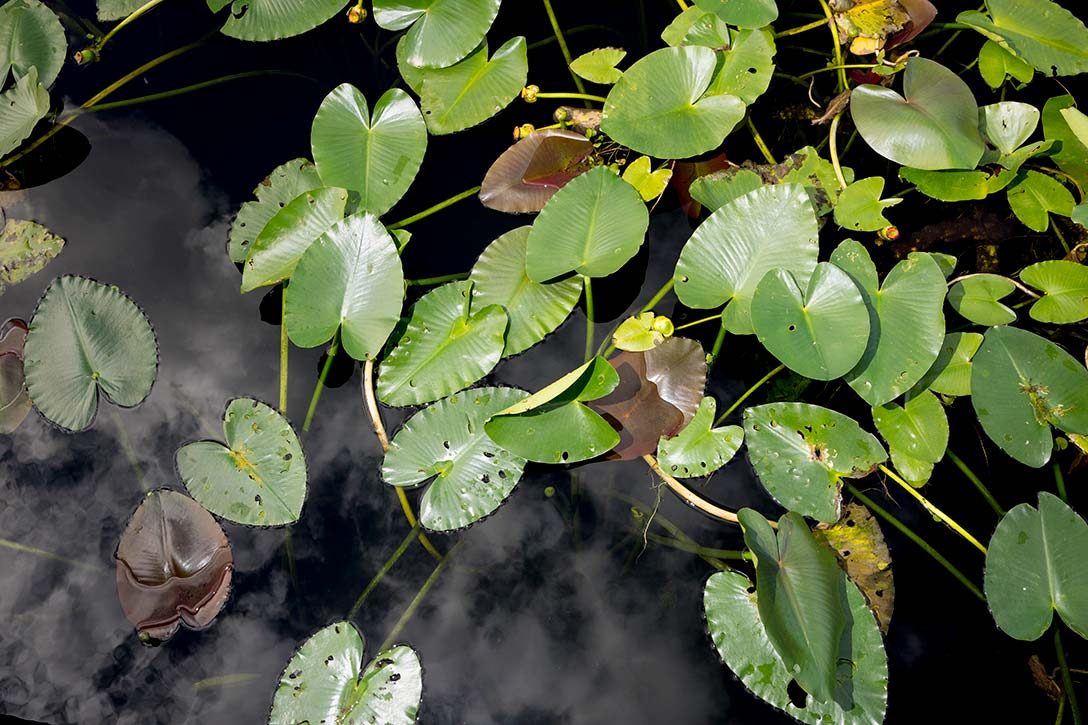 The challenges that Ramos is confronting range from invasive plants (at the top of the list is the fire-resistant, salt-tolerant Brazilian peppertree) and invasive animals (18-foot Burmese pythons) to conflicts between conservationists (“No air boats—ever”) and outdoor enthusiasts (“More campsites, now”). There are hurricanes (park infrastructure took a big hit from Irma in 2017) and the 2018–2019 government shutdown (loyal volunteers kept the park open).  And, of course, there are rising water levels brought on by climate change. Some dilemmas can be solved simply: when vultures were eating windshield wipers and door seals at the parking lot near the Anhinga Trail, the park supplied tarps for visitors to throw over their vehicles. Problem solved, no birds harmed. More often, however, the dilemmas that Ramos is facing involve complex solutions with many stakeholders.

No Everglades crisis is more pressing and long-standing than water flow, or the lack of it. Well before the Everglades was established as a national park in 1947, people were choking off its critical supply of fresh water, drying up sensitive habitats in order to farm or to build roads, homes, and cities. Developers dredged, dammed, and drained what they saw as a useless swamp, and endangered the seagrass beds, mangrove forests, freshwater marshes, and plants and animals that lived there. Restoration efforts have been underway for decades, and now, Ramos explains, the Everglades is the site of the largest wetlands restoration project in the history of the world. “We’re not just talking about the park,” he says. “We’re restoring the greater Everglades ecosystem—north to Lake Okeechobee and south to Florida Bay. This level of restoration work has never been attempted.” 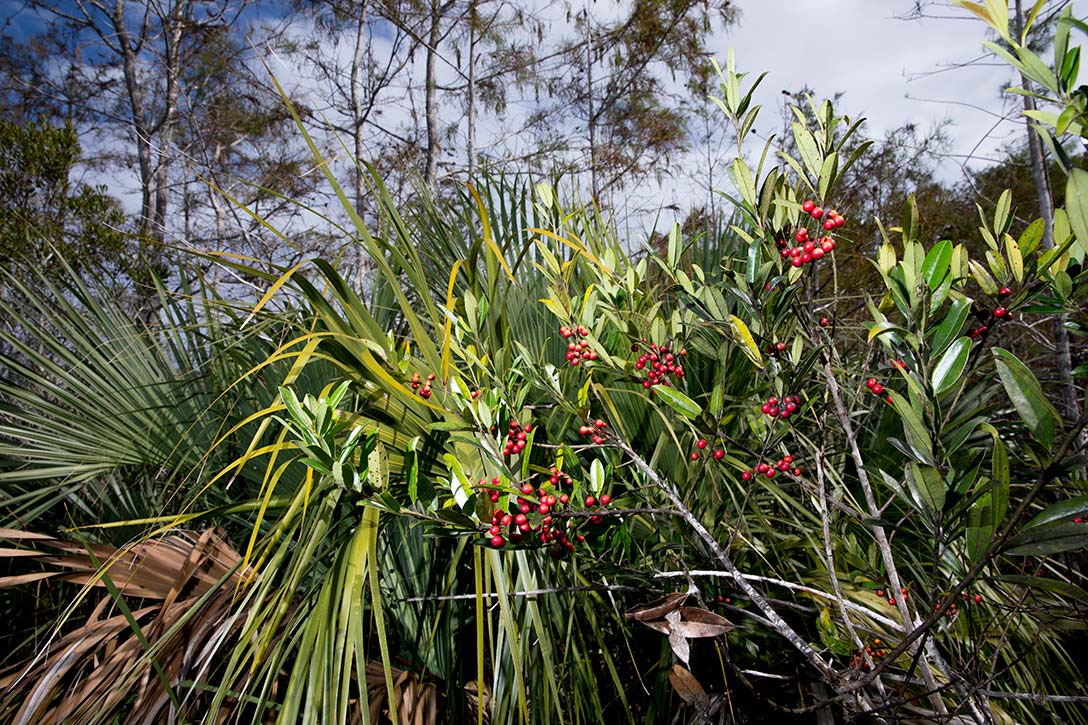 “A lot of people have a stake in what we’re doing,” Ramos says. “The Everglades is a 1.5-million-acre wilderness surrounded by people.” As superintendent, he cooperates with federal, state, and local officials; scientists; business people; residents; and all sorts of community and advocacy groups.

As a pragmatist, he sees his role as bringing everyone together while steering clear of politics, and keeping in mind that everyone loves the national parks.

Ramos and other park advocates celebrated a critical victory for the Everglades in June, when the U.S. Department of Transportation announced it will give Florida $60 million to complete the elevation of the Tamiami Trail, a highway across the Everglades that has blocked freshwater flow since it was built in 1928. The $60 million will be added to $40 million appropriated by the Florida legislature. Given today’s unpredictable political climate, the funding for this complex interagency effort was by no means assured. Ramos says, “The National Park System is the recipient of a lot of love regardless of who is leading the country. These places tell the story of who we are as Americans.”

Ramos says the first phase of the Tamiami Trail project has already made an impact. “Restoration is not anywhere close to being done, but we have moved a significant amount of water into the park, and the ecosystem is responding well,” he says. “Nesting birds like the egrets, ibises, and spoonbills are coming back—we’re seeing super colonies that we haven’t had in 80 years. When we start doing right by Mother Nature, Mother Nature tends to respond.”

Ramos believes it was his college experience that made him comfortable working with people from many backgrounds. Born and raised in Puerto Rico, he came to UMass in 1985 because he wanted something different and was intrigued by the Northeast. 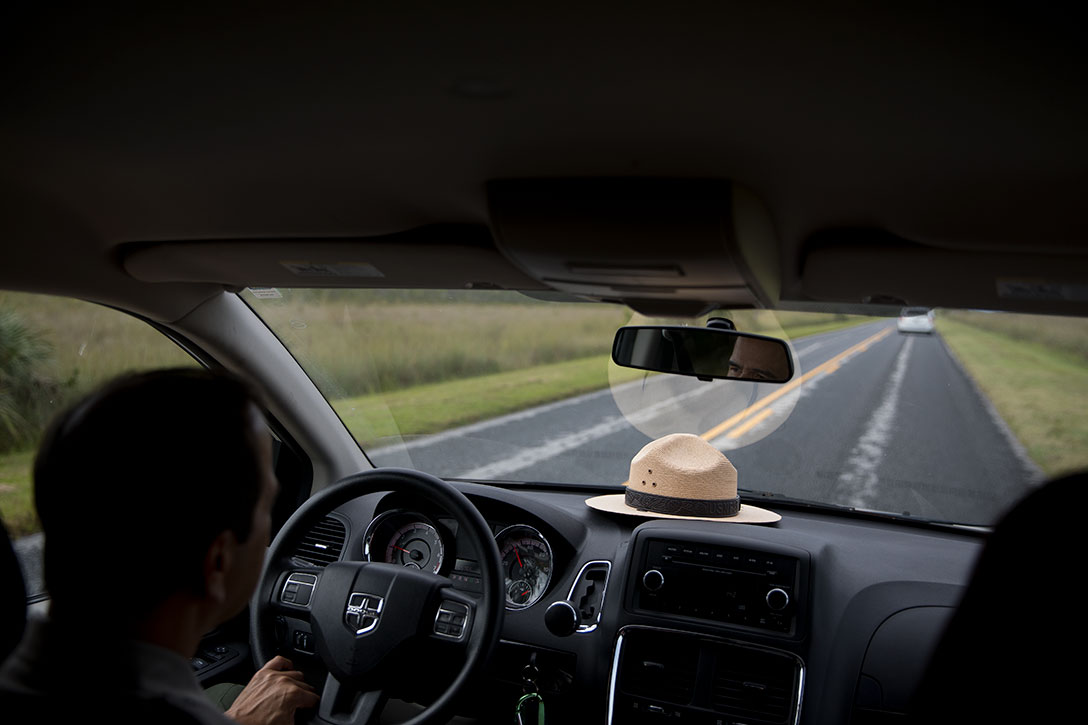 He recalls arriving for school with one big suitcase and not enough winter clothes for New England weather. Unaware of the long distance from Boston to Amherst, he took a taxi from Logan Airport to his dormitory. As he settled in, his language skills improved from classroom English to casual campus English, and soon enough he was making friends and going with them to places like the Holyoke St. Patrick’s Day Parade and to their homes for a New England Thanksgiving dinner. “I shook loose from my introversion,” he says. “UMass was exactly what I needed. Puerto Rico is a small island and at UMass I experienced a broad range of perspectives.”

Ramos studied agriculture and natural resource economics, and in his senior year was recruited by the U.S. Department of Agriculture (USDA) as a student trainee for the Farmers Home Administration. He first worked for the USDA in Brattleboro, Vermont, but in 1991 he accepted a position in the U.S. Virgin Islands, where he served as Community Development Manager.

In 1997 he returned to New England as the director for administration of rural development, based in Montpelier, Vermont. After four years back in the cold (“It’s inhumane to expect a Puerto Rican kid to spend too much time in the Northeast,” he jokes), he donned the flat hat of the Park Service as an administrative officer at Florida’s Big Cypress National Preserve. In 2005 he was named deputy superintendent at Big Cypress, and was promoted to superintendent in 2009. He moved on to the Everglades and Dry Tortugas National Parks in 2015 when he was selected as superintendent.

In the past year, Ramos has focused on the reorganization of park management. He continues to look for a balance between passive and active recreation in the parks, he has endeavored to bring more minority visitors to the parks, he has boosted entrance fees to address deferred park maintenance, he has raised awareness of the historic Nike missile site—a relic from the Cuban Missile crisis in Everglades National Park, and he has worked to improve park infrastructure. 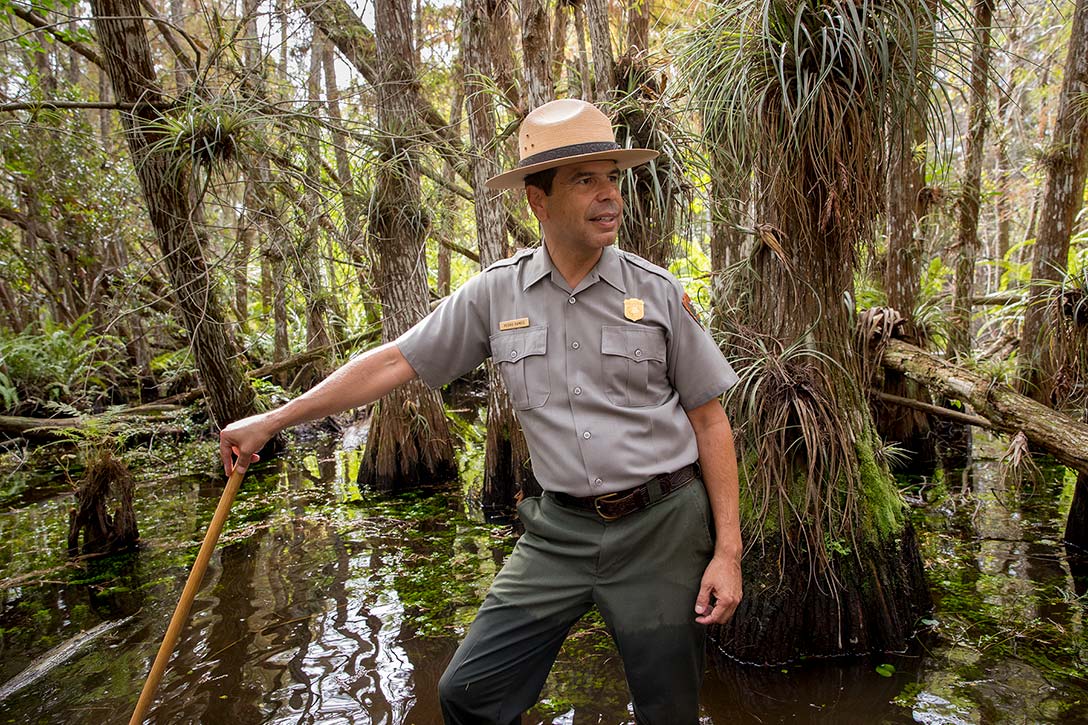 As he takes action on these and other concerns, Ramos tries to keep things simple. “I stop thinking about the issue, the thing, the problem,” he says, “and I start thinking about the people. Put people first and things will fall into place.”

Thigh deep in the clear water of the cypress dome, still wearing his flat hat, Ramos calls out to a family group of swamp walkers. “Is this your first time? What did you see? How did you like it?”

“The Everglades is not as easy to appreciate as the Grand Canyon or Yosemite,” he tells me as we move on to look for fish and turtles from the elevated Anhinga Trail boardwalk. “But you love it once you get to know it. It’s a wild place of incredible diversity. I’m very fortunate to be involved with it. For me, it’s been an amazing journey.”