A UMass researcher works with Alaskan tribes to illuminate a heartbreaking issue.

With the suicide deaths of Anthony Bourdain and Kate Spade this past summer, people have begun speaking more openly and honestly in public forums about suicide—about people they’ve lost to it, and even admitting to their own suicidal thoughts. Much of the discussion has centered on mental illness and depression. But one UMass researcher is discovering that there are more approaches to addressing this crisis than we may have come to believe.

Lisa Wexler, associate professor of community health education in the School of Public Health and Health Sciences, is known for her ongoing work studying suicide prevention in Alaska Native communities, where suicide rates are among the highest in the world. In Northwest Alaska, from 1990 to 2000, Iñupiat young people were dying by suicide at a rate as high as 185 per 100,000 people, significantly higher than the rest of the U.S. during that same time, with a rate of 10.7 per 100,000.

Yet Wexler, a recipient of multiple grants from agencies like the National Science Foundation and the National Institutes of Health, observed that suicide rates were declining in some Native communities. So she began investigating what those communities are doing to save lives.

Several times a year, Wexler flies to Kotzebue, Nome, and Bethel, then travels by hopper plane and snowmobile to villages that can’t be reached by road. She often bunks in clinic exam rooms. As locked in deep freeze as the Alaskan landscape is, Wexler particularly likes going up in January because she can see the spread of the light as the season moves toward spring. Just as she focuses on the surging daylight at winter’s end, it is important to Wexler to change the conversation surrounding suicide in the communities she works with from one of risk to one of strength.

The Glimmers of a Solution

Suicide risk in Native communities is exacerbated by forces imposed from outside: resettlement, rapid and relentless social change, and national policies of assimilation. These forces are destructive to Native culture—and slow to let go.

Nevertheless, after 20 years of tribal suicide prevention efforts in Northwest Alaska, suicide rates have fallen. In the past five years, in the Northwest Arctic Borough, some communities have cut rates by a third. So, what is working? If you examine the remedies alongside the risk factors cited above, you’ll find them to be the diametric opposite: local control of institutions and families, the power of tribal governments to follow through with their own decisions, sovereign health care structures in local communities, and revived and thriving cultural practices, including sites to perform spiritual activities.

A number of the prevention efforts in the region over the last two decades were put in place by the Maniilaq Association, a tribally led nonprofit that provides all health and social services to the 12 tribes they serve in Northwest Alaska. Maniilaq Association’s interventions include a tribal suicide surveillance system, media campaigns and events that promote culturally specific messages about the importance of family and sense of belonging and responsibility to one’s tribe, outreach to those who have exhibited suicidal behavior, and training for clinical staff in culture-specific risks for suicide—as well as making sure those staff are versed in cultural idioms and practices. Village leaders attend retreats for healing, inspiration, and leadership training, from which they return to develop local wellness initiatives. And there are other powers at play in addition to Maniilaq: the Northwest Arctic Borough School District, for one, implemented a peer leaders program to support personal and cultural identity and to boost school attendance. The resulting higher grades and decreased alcohol and drug use are also considered factors that protect against suicide.

As the causes contributing to suicide are multilevel, Wexler is insistent that solutions must also be. Picture a system of nets that can catch you if you’re falling: you might fall through one, but there’s another right below it.

Multiple nets are better than one, which is something Wexler learned from experience.

When Wexler first came to Alaska from Florida as a newly minted social worker in her mid-twenties, she knew nothing about Alaska Native culture. 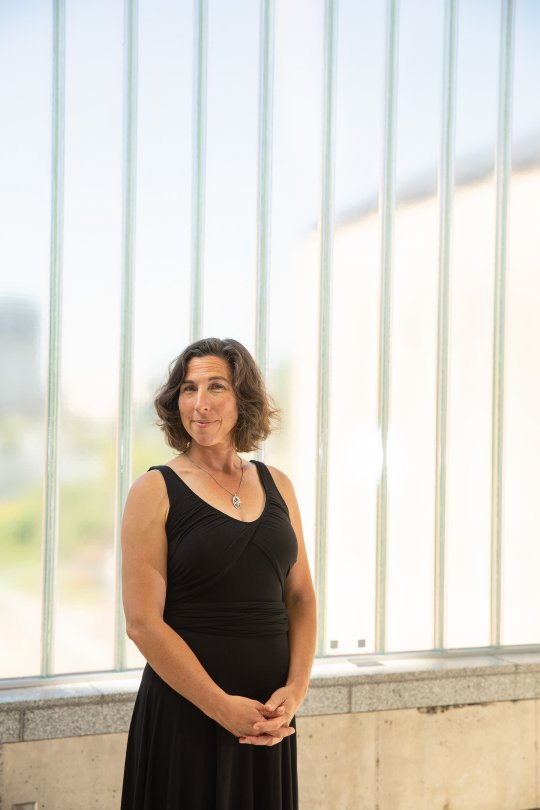 Lisa Wexler says, “My job is to make the research as relevant as possible, step back and let the Native communities take over.”

As a counselor, Wexler’s job was to intervene to “keep a person’s body safe” if she felt there was a suicide risk. But the protocols she was given had consequences. “If I was really worried about someone, I would send the troopers to go get them and put them in the hospital,” she narrates. “And the hospital was a locked cell, so they called it ‘hospital jail.’ I was taking kids from their families. So I was messing up other things. I felt like I was doing harm.”

Wexler knew there was something important she was not getting. “Figuring out imminent risk is almost impossible in a totally different cultural context. You don’t even know what you don’t know! I was making decisions I was ill-equipped to make. So, when I feel confused about the work I’m doing, I go back to school.”

Wexler’s PhD studies in work, community, and family education at the University of Minnesota added dimension to her understanding. “If we focus only on mental health, we understand suicide in a very limited way that ignores all the historical violence and policies that are marginalizing. The assessments I’d been making were based on things that weren’t ever Alaska Native people’s norm. They were based on white, middle-class people.”

Wexler points out that the therapist-client model of talk therapy, isolated within an office, is not something often sought out or followed through on by indigenous people, even when it’s recommended as a prevention. It simply doesn’t connect to the way they live their lives.

“Our knowledge comes from a very particular, individualized perspective,” she continues. “When I was starting out as a therapist, a woman came in and I asked her a basic question about how she was doing. She told me about her son, her husband, all of these people who were primary relationships in her life. Why wasn’t she telling me about herself?” It occurred to Wexler later that the woman was giving information about herself: “I realized she was telling me, ‘You can see the contours of how I’m doing, because I’m telling you about all the people who shape my world.’”

Today, community contribution and leadership is crucial to Wexler’s approach to her work. “We don’t tell people why we think these risk factors or protective factors are occurring; we give them the information and ask them what they think is going on in their community, then ask what they want to do about it.” Wexler, Maniilaq, and researchers at the University of Alaska Fairbanks are working with PC CARES, a health education intervention directed by the tribes to bring down suicide rates. Wexler is also involved in forming the Alaska Native Community Resilience Study, part of the new Alaska Native Collaborative Hub for Resilience Research (ANCHRR). Their work will result in a mapping tool that villages can use to identify the community-level factors most associated with reduced suicide risk.

In many ways, Wexler says, we have limited ourselves in preventing suicide by “shrinking it so small that it fits within a mental health box” and assuming the only way to deal with suicidal ideation is to go to a therapist. Suicide rates around the United States are actually going up, having increased by 25 percent nationally between 1999 and 2016. With nearly 45,000 suicide deaths in 2016, it is now the tenth leading cause of death in the U.S.

One clue that suicide may be more than a mental health issue is demographics. People who are more likely to die by suicide look different in different places. Older white men in the lower 48 states. Young farming wives in rural China. Young Native men in Alaska. Wexler urges us to “back up a little and look at the contours” to see that sociological issues, in addition to mental health, drive suicide risk: for example, the value that society places on certain people yet not others, or the different ways people are asked to be successful.

For instance, young Native men, who have the highest suicide rates in the communities Wexler studies, are under stress from the rapid shift in gender roles brought in by colonization. “There is a lack of ways to be a good indigenous man and to succeed in Western culture,” explains Wexler. “The things that boys are good at, and give meaning to, activities like hunting, riding machinery, and fixing machinery, are not employment-ready kinds of things.”

Community belonging and cultural continuity are resilience factors. Yet in Northwest Alaska, school schedules and work schedules imported from the outside have frequently interfered with important tribal practices—a slow, subtle way of marginalizing cultural processes and values. The start of school in autumn is prime hunting time for caribou and salmon, as well as berry picking season. And employers are not always flexible when allowing time off for these essential tribal observances—nature does not provide an advance schedule—so a man has the options of losing his family’s subsistence and a personal connection to his cultural rhythms or losing his job. Neither is a good alternative.

One wonders if it’s easier to shorthand suicide as a mental health issue because it’s simpler to categorize that way, and to offer a clinic-based solution—even one that’s not effective— than to change the system itself.

Suicide arises from a confluence of factors beyond psychology. Those can be economic and sociological: related to employment, health care, housing, criminal sentences, to people’s sense of purpose and control over their future. Which is why prevention must happen on many levels, by fostering a healthy society where people feel safe, valued, and self-determining. Public policy can reduce suicide risk.

Something the successful measures instituted by the tribes have in common is that they help people experience how much their life is of consequence to others. People see that through their actions and their existence, they make a difference in their community. While the tribes’ efforts in Northwest Alaska are specific to their needs, these remedies could be a paradigm for other societies.

Resilience, in ecology, refers to the capacity of a disturbed environment to bounce back to its optimal, original functioning. Even though suicide rates in the Arctic are currently the highest in the world, this was not always so. And the drop in those statistics over the last five years suggests that it need not always be so.

In addition to observing ways the harms caused by colonization can be undone, Wexler’s collaboration with the tribes suggests approaches that even non-Native populations can consider, which could ultimately decrease the global burden of suicide. What are the nets that catch people when they find themselves falling? What sense of inner value and self-determination can imbue them with the ability to bounce back?

“With suicide, there’s a lot that’s unknowable,” Wexler admits. “But there’s a lot that we could be thinking about: what makes life worth living, how we give pathways to people to live the life they want to live, to support their capacities, to be happy—whatever that means for them—and to work for social justice in a way that makes a future people want to walk into.”

Photo at top of page by Lisa Wexler.