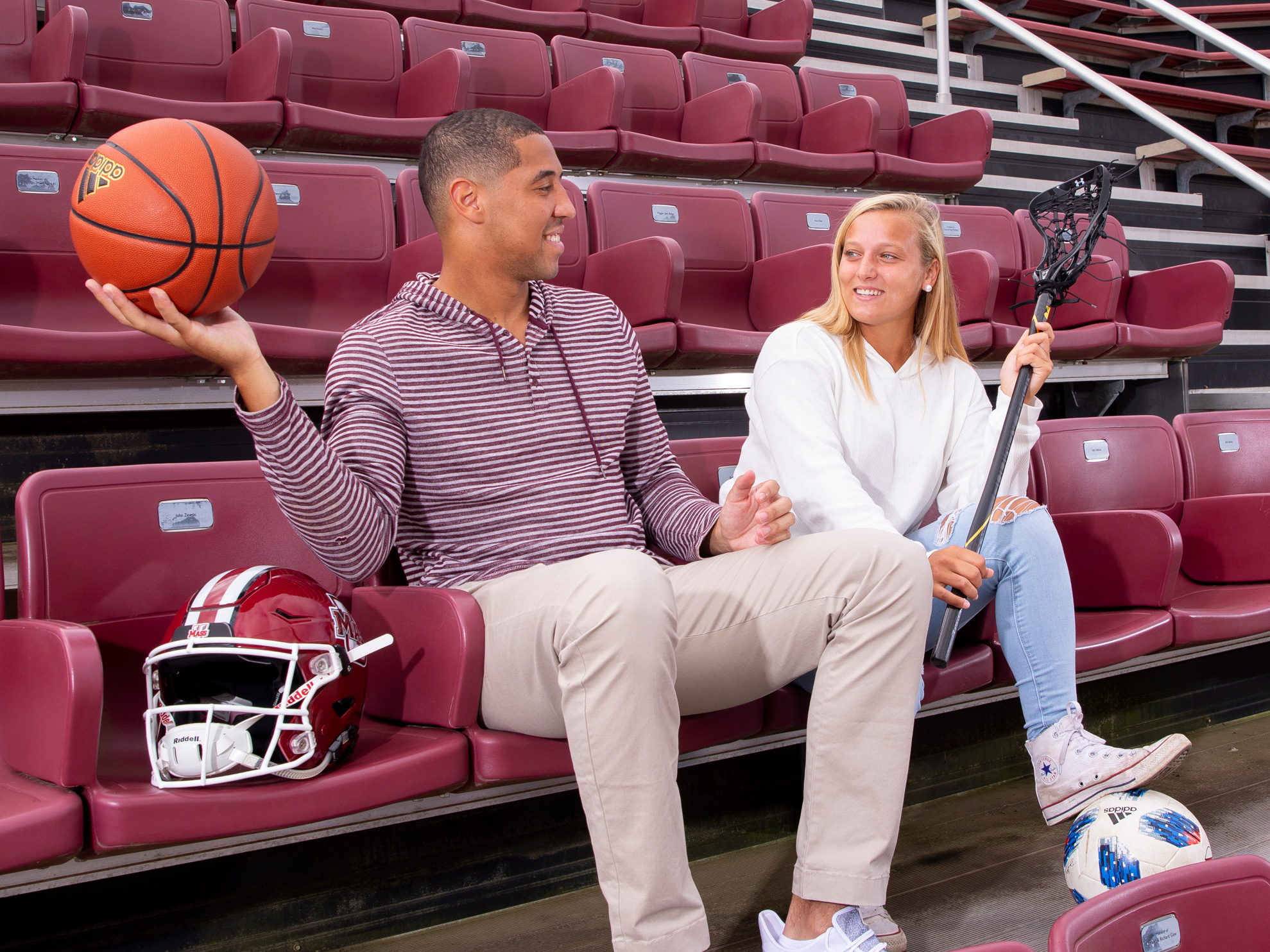 Two-sport varsity student-athletes on college campuses are rare these days, even more so at the Division 1 level. However, this year, among the 650 intercollegiate athletes at UMass Amherst, two, Randall West (football and basketball) and Kelly Marra (soccer and lacrosse), are taking on the extraordinary challenges of competing in two different sports.

The biggest key to success, West and Marra agree, is time management. Juggling classes, practices, games, meetings, and homework is tricky for all student-athletes, but adding the commitments for a second sport puts several more balls into the air.

West, a red-shirt junior from Moorestown, New Jersey, came to UMass to play football. He added basketball to his résumé after successfully showing his stuff at open tryouts last winter. He attributes his extreme organization to the time management course he took as a freshman in high school. “When I came to college I thought I was more prepared than anybody else because I was already taught how to manage extra time wisely and correctly,” he says.

Marra, who came to UMass for the opportunity to play both soccer and lacrosse, says she was ready to be time-efficient after playing multiple sports, plus being on travel and club teams in high school on Long Island, New York. “It is a challenge, but I get a lot of help balancing everything. I wouldn’t be able to do it without the help of others; coaches and academic advisors check in on me and friends on teams keep me in the loop. It makes it easier because I have so much support.”

Marra keeps organized the old-fashioned way. “I have a planner and know what I am going to do. I look at it every night and I plan early so I don’t get overwhelmed. I am disciplined and I like sticking to a regimen.”

Both West and Marra savor their down time, little as it is, to prevent burning out. Marra unwinds with her friends, catching a movie at the mall or going out to eat. Classic ’70s and ’80s movies and television shows are West’s go-to entertainment.

"I was the first person in my family to ever go to college,” said Bob Foote ’62, a longtime supporter of UMass Amherst, outstanding Minutemen gridiron star, and member of the George “Trigger” Burke Hall of Fame. “Without the scholarship and academic support, I may not have been able to do that and complete my degree work. I feel that I owe UMass and we’re happy to do whatever we can to support current and future student-athletes.”

Foote and his wife, Marianne ’77, contributed $250,000 toward the renovation, modernization, and expansion of academic support space for student-athletes. The Bob and Marianne Foote Academic Success Center in the Boyden Building, completed in August, provides more room and better technology for individual, group, and collaborative learning. The new academic area includes space for advising, learning specialists, one-on-one and group tutoring, workshops and seminars, and private rooms for individual counseling. In addition, three expansive lounge areas are available to foster peer-to-peer learning among student-athletes from all sports.

“I’ve been lucky,” says Foote. “Things have worked out well for me, and my days at UMass had a lot to do with my success.”

Athletics|Giving|Sports Talk
Back to top