By
Judith B. Cameron '16G
Photos by
John Solem

Massachusetts State Representative Marjorie Decker, D-Cambridge, was expecting a routine day last November when she testified in support of a bill she filed that would take guns away from those in danger of hurting themselves or others.

Compared to tough anti-gun laws passed by the legislature in 2014, this “red flag” bill seemed uncontroversial. She left Beacon Hill for a lunch meeting with the Cambridge police commissioner and tended to other business. By the time she arrived at the home she shares with her husband and children on a tree-lined Cambridge street, her social media accounts were flooded with threats. “I opened my Facebook page and Twitter account and all of a sudden I could not breathe,” she recalls. The commissioner ordered police protection for Decker and her family.

In an interview in her home months after the bill’s June approval, Decker was still shaken by her experience. She is angry at how, at lightning speed, gun absolutists made her a target in the fight over what she sees as a reasonable gun law that has been shown to save lives in other states. “That made me more determined to get this bill passed,” she says. It sailed through the house on a 132-15 vote and the senate on a 36-1 vote.

Decker’s effort to pass the Extreme Risk Protection Order law, known as the red flag law, began with constituent service. Decker has represented Cambridge in the State House since 2012 and says it is her priority to talk to high school and college students about politics and the legislative process. She encourages them to recommend a new law and, when appropriate, vows to put the full force of her many years of agitating for social justice and her experience as a member of the Massachusetts legislature into getting the bill adopted.

The campaign for the red flag bill launched with a tragic story Decker heard from a Cambridge college student. The student told Decker that his best friend in Oklahoma had suicidal thoughts, which were known to his parents. The parents took their son’s legally purchased gun away every time he bought one, and beseeched the gun store owner to stop selling weapons to their suicidal son. Their appeals were to no avail and the young man ended his life with a bullet.

“The gun store kept selling guns to him because they could,” says Decker. Now, under the Massachusetts law, families or housemates can go to court and seek an order to remove guns and a gun license from a person deemed dangerous to themselves or others. Decker introduced her bill before the Parkland, Florida, massacre in which the alleged shooter exhibited red flag behavior before he killed 17 people.

Sometimes you can tell a person’s character by who their enemies are and the NRA threatening you is scary but it also is a badge of honor.

The National Rifle Association and the Gun Owners’ Action League of Massachusetts were vociferous in their opposition. In addition to death threats on her social media accounts, opponents made misogynistic statements and released personal information and videos designed to encourage animosity against Decker. “The stuff being said about me on the internet was awful and scary,” she says.

If her foes knew Marjorie Decker—a 46-year-old progressive feminist raised in public housing, the first in her family to graduate from high school, a fighter for just causes since a teenager, a natural politician and polished public speaker—they would have known that Decker would not back down one iota. Massachusetts House Speaker Robert DeLeo explains, “Throughout this process, and facing incredible adversity, Representative Decker was tenacious, insightful, and judicious in her work. She was able to bring together stakeholders from many sides of the issue to prevent individuals who pose a risk to themselves or others from owning or possessing a firearm.”

Decker says she became angry that her support for a bill exposed her family to possible dangers and felt humiliated to have to call parents of her children’s playdates to inform them of her family’s need for police protection. “It took a toll on our family.  I was constantly tense and my husband and children could feel it. They were not immune,” Decker recalls.

An astute politician, Decker did what she does best: organize and educate. “Marjorie knows how to work the system and she is wonderful at it,” says former state representative Ellen Story of Amherst, who first met Decker as a UMass student, and later hired her as a legislative aide. The attempts at intimidation, Story says, would make Decker stronger in her resolve. “Sometimes you can tell a person’s character by who their enemies are and the NRA threatening you is scary but it also is a badge of honor,” says Story. 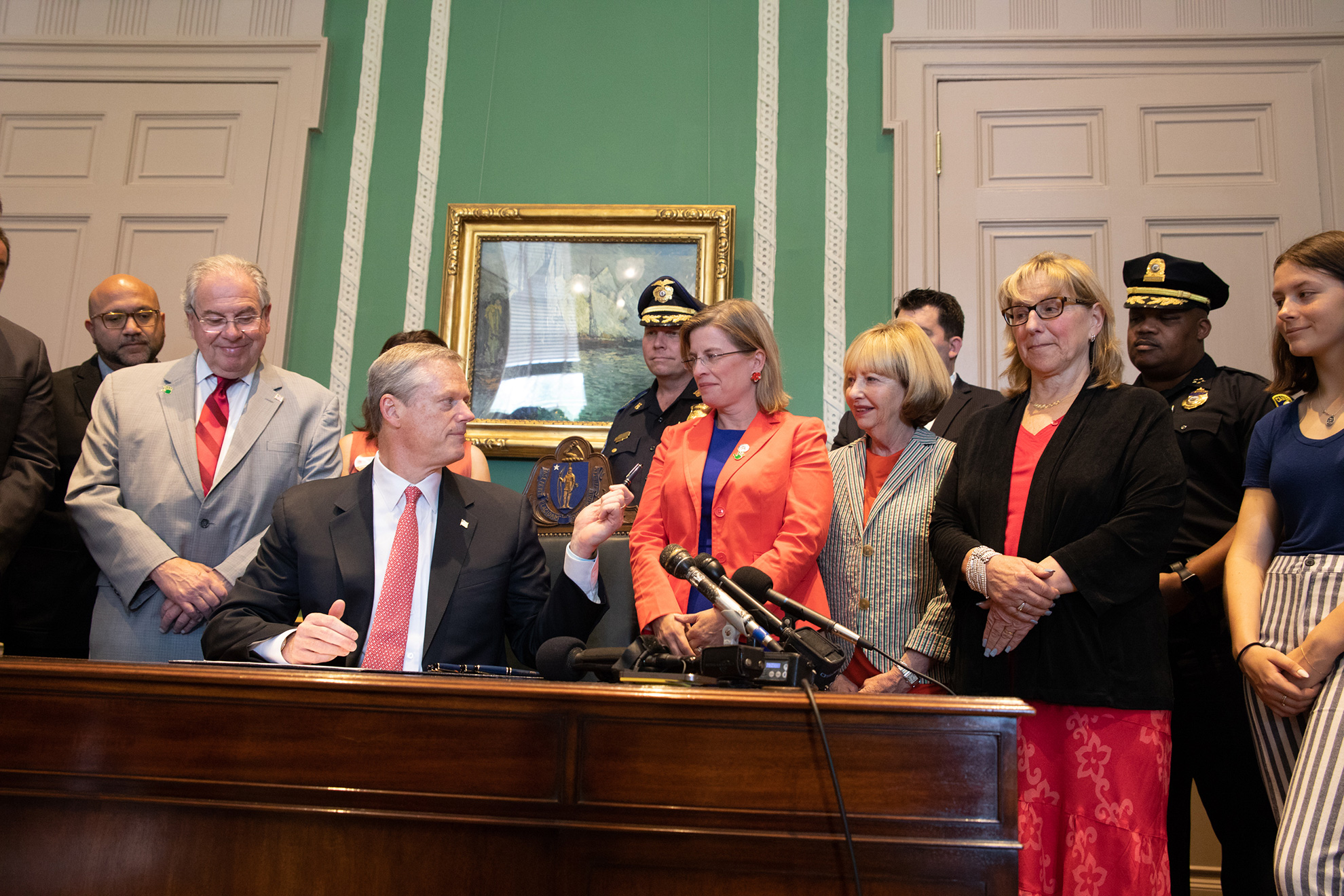 Decker convinced lawmakers, including Republicans, that the red flag bill should be added to the state’s comprehensive set of commonsense gun laws, considered to be the toughest anti-gun laws in the nation. Massachusetts has the country’s lowest rate of gun fatalities, according to the Centers for Disease Control and Prevention. Decker found allies in groups like Stop Handgun Violence and Moms Demand Action for Gun Sense in America, whose members advocated for the red flag bill and also offered comfort to Decker during the height of the threats.

Decker, who stresses that she alone did not get the red flag bill passed, says her drive comes from growing up in poverty and gaining at UMass Amherst a clear understanding of why low-income families live amongst great wealth. She witnessed her loving parents work low-wage jobs, exhausted at the end of the day and still unable to break the cycle of poverty. Says Decker, “So, something else is falling short here; it is not my parents. I think that is the roots of my own political fire.”

She finished her bachelor’s degree with honors, majoring in Social Thought and Political Economy. Early on, she says, she figured out how to be a successful student at a large research university. She found mentors in graduate students and in faculty members such as the well-known economist Samuel Bowles and Bill Strickland of Afro-American Studies. And, she followed the advice of another student who told her: “Always sit in the front of the classroom—it won’t feel so big.”

When she traveled from her hometown of Cambridge to Amherst, she packed her social activism that began at Cambridge Rindge and Latin School, where she was vocal in demanding that the high school distribute condoms to combat climbing rates of HIV and AIDS. At UMass, her activism continued unabated. She peacefully protested the first Persian Gulf War and after the Rodney King verdict and riots, she led students in demanding the hiring of more women and people of color for faculty positions. “There were lots of opportunities to be engaged in what was happening in the world,” she notes.

Decker’s campus activism and academic studies gave her a foundation as a bold change agent, leading to a career in public service.  At UMass, Decker made her first foray into seeking elected office. After being told first-year students don’t run for Student Government Association, Decker ignored the conventional wisdom. “My dorm mate and I ran stealth campaigns and unseated juniors,” she recalls. She also won a seat on the Amherst Town Meeting. Like many, she left UMass intent on making the world a better place; in her case, the phrase was more than a cliché. In a stint with Teach for America in Louisiana, she says she challenged norms—she ignored a principal who instructed her not to call parents of absent students. When she returned to Cambridge to run a youth program centered on basketball programs, she advocated for activities more meaningful to young people.  “She sees herself as a defender of people who grew up in the same situation as she did.  It is a huge part of her mission,” says Story.

In 1998, Decker became the youngest person ever elected to Cambridge City Council, where she served for 14 years. She was heavily favored to win reelection in November to her fourth term representing the 25th Middlesex district, known for its progressive propensities.

House Speaker DeLeo believes Decker will win many elections. “It has been a pleasure to watch her master the legislative process, change minds, and win over the hearts of her colleagues. The same qualities that empowered Marjorie to champion the red flag bill and save lives will serve her well in what I’m sure will be an incredibly productive career,” he says.