Sarah and Her Robot

Sarah Osentoski ’08G, ’09PhD wants you to have a cute robot.

Like many kids, Sarah Osentoski ’08G, ’09PhD expected that one day she would have a home robot. Now she does—a knee-high, big-eyed robot named Kuri. As cofounder and chief operating officer of Mayfield Robotics, Osentoski was instrumental in dreaming up Kuri, and right now she’s working full tilt to bring her to market for the 2017 holidays.

“People have long been promised this idea of a home robot—in TV, in movies, in science-fiction books,” she says. “I watched Rosie, the robot on The Jetsons. The promise was, ‘Someday you’ll get to have this robot in your house and it will be amazing.’ Kuri is the next step toward that robot future.”

While not as helpful around the house (or as cheeky) as Rosie, Kuri can glide smoothly around corners and obstacles and can communicate in beeps and boops. She recognizes family members and greets you when you come home. Like Amazon Echo or Google Home, she plays music and podcasts. She can take candid video clips and send them to your phone. By intention, she’s more like a smart and lovable pet than a person. 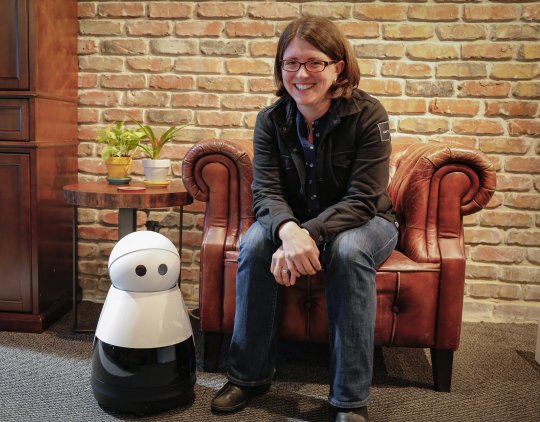 Building an affordable and adorable home robot involved enormous complexities calling on tech such as SLAM (simultaneous localization and mapping) and machine learning that was in its early stages when Osentoski started her UMass Amherst doctorate in robotics. But what Kuri can do is less important to Osentoski than who she is. The keywords guiding Kuri’s design team were “earnest,” “helpful,” “humble,” and “adorable.” Osentoski says, “What’s paramount right now is that our robot has an engaging personality so that people will accept it into their homes.”

To ensure Kuri’s adorability, the team at May eld Robotics designed her with expressive eyes in lieu of a screen. And after consulting with a former Pixar animator on her movement, they programmed Kuri to communicate her intentions. For example, Kuri moves her head and looks before she makes a turn, so as not to startle the humans in her household.

To get Kuri ready to ship to the people who have pre-ordered the $799 robot for the holidays, Osentoski has been flying from Mayfield’s Silicon Valley headquarters to China, where Kuri is made, and to Germany, home of Mayfield’s parent company, Bosch, where she previously worked as manager of the Personal Robotics Group. While on the road, Osentoski often checks in with her husband and their five-year-old son, Zach, via Kuri’s camera. “I can see them dancing around without disrupting their routine like I might on FaceTime,” she says. “I can ask Kuri to read Ramona to Zach for the 30th time.”

What’s paramount right now is that our robot has an engaging personality so that people will accept it into their homes.

Osentoski found her inspiration in the UMass Computer Science Building. “I loved machine learning, the idea that programs can learn to get better on their own rather than me having to toil on them,” she says. And she thrived on being around brilliant people pushing robotics from the academic to the commercial realm. She says, “I had strong female role models in robotics, and there were 10 women in my UMass PhD cohort. It’s really important to have friends with shared experiences.” Following this philosophy, she built a diverse team at Mayfield, including many women. “A diverse workforce gives us multiple perspectives on products that will appeal to many people, instead of a narrow segment of the population,” she says. “It’s a good business decision.”

Osentoski’s quest is to make the benevolent robot future she dreamed of as a child in Nebraska a reality. On campus in the spring to accept an outstanding young alumnus award from the College of Information and Computer Sciences, she summed up her work with a smile nearly as wide as Kuri’s, “Home robots are a completely new idea. They did not exist when I was at UMass. I work with a great team in a field that truly challenges me. And it does not hurt that the end goal is a cute robot!”

Alumni|College of Information and Computer Sciences
Back to top