A UMass student recalls experiencing 9/11 as a four-year-old.

Timid. Collected. Indecisive. Independent. New York City, with its endless contradictions, breeds people with keen perceptions, impermeable wills to survive, enormous concern for one’s neighbor. New York can be privilege; Manhattan suggests penthouses with skyline views and people glamorously hailing yellow cabs. Anyone who has ever listened to rap is immersed in a different kind of New York City. This New York is the backdrop for public housing. The ghetto struggle. Both New Yorks are real. They’re not mutually exclusive. They coexist. I grew up in neither.

Being a generational New Yorker is almost rare. I am one. My dad speaks with a Brooklyn accent that most people think is just in movies about the mob. His version of New York is working hard, walking fast. A lot of curse words. My mom believes in the glamour of Manhattan: hailing cabs instead of riding the subway, buying European cigarettes for $14 a pack, shopping at four in the morning during Christmastime so she has the stores to herself. My sister’s New York is sipping champagne with another guy who works on Wall Street; never husband material. Despite our thirteen-year age gap, both of our New Yorks were subway rides to school in kilts and knee socks. That was the outfit she wore when our neighborhood became a war zone in 2001.

It is no shock that witnessing 9/11 was traumatic, but most people assume a four-year-old would hardly recall much. I absorbed the entire event like a sponge. My preschool was across the street. I was supposed to go to the toy store in one of the towers after school. I saw the second plane hit. I saw stick figures falling out of the buildings. I heard bones shatter as they hit the concrete. Debris-covered adults screaming in sync with sirens that I thought would never stop. A burning smell that is ultimately death in odor form. My apartment ruined. A surgical mask over my face. One per family. Walking across the Brooklyn Bridge. Looking back. My pretty skyline. Gray. Blazing. Smoky. The sirens never stopped. An eerie quietness settled over the city. 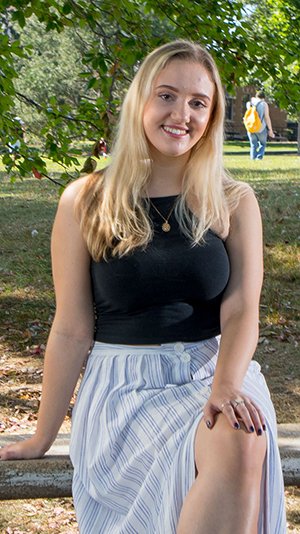 Months later, all of the textbook side effects of post-traumatic stress disorder started to kick in. Subsequently, I began seeing a therapist on the Upper West Side. Every week, my mom and I would take the subway to West 72nd Street. We’d pass the Dakota building, where John Lennon lived and was killed. I sat in a room that smelled like oranges and played Candy Land. I brought my dolls and exhibited impressive maternal care. I told the therapist, Carol, about a “dust lady” that was following me around. She was trying to scare me. Out of one enormous atrocity, I chose to constantly relive a five-minute interaction my mom and I had with a debris-covered woman in distress. She looked terrorized. She made eye contact with me. I could feel her terror. I felt her terror with me after that moment. After that day. After a year. After many years. Hiding in the crevices. In my dreams. While I was playing. My thoughts were governed by this woman’s image. My childhood was plagued by her terror. My terror.

Therapy stopped. My life went on. Eight years old. Mute. Ten years old. Introspective. Twelve years old. Anxious. Fourteen years old. Self-reliant. Miserable. Therapy resumed. Same therapist. Four years. Kilt. Knee socks. Subway. At this point, 9/11 is not directly affecting me. I’m not mentally trapped by the image of a horrified woman. Instead, I’m empty and disappointed. I sit on the subway while businessmen and babysitters with children look at me as I cry. Another year passes. Still wearing the kilt. Still wearing the knee socks. I’m not miserable anymore. I am numb. I’m learning about myself. Sixteen years old. I’m a young woman getting over the suffering of a childhood event. It is history. It is my life. More time passes. More time spent sitting on the subway, looking out the windows into the abyss of train tunnels. Even more time spent packed much-too-tight in a subway car. So little room to breathe. A lot of room to think. I sit on the couch on West 72nd Street. I stare at a vent. I speak to the woman who still remembers me as the poised little girl who played board games and took care of dolls. I’m early for a session one day. I sit in Central Park. It’s like a scene from a movie set in New York. Holding coffee. Kilt and knee socks. Central Park is a fine place to think, I’ve decided.

The traumatized little girl that I was needed the comfort of refilling MetroCards, lit skyscrapers, and crowds of tourists in my way to heal.

I sit on the bench and I think how lucky I am. 9/11 changed New York forever. My New York. Everyone’s New York. During moments where I failed to feel at ease in my own mind, I still felt comfortable in Manhattan. Train rides. Central Park sittings. Walking down blocks and avenues for hours by myself. Relishing one neighborhood after the other. Independence. I recall walking in the Battery Park area to my church—a neighborhood full of construction and rebuilding. “They’re saying the Freedom Tower will be finished in 2014.” My dad said this to me. It was 2011. Fourteen-year-old me imagined 2014 as a shiny, bright new year in the distance. Seventeen years old sounded romantic and respectable. 2014 came. The Freedom Tower was finished. Time moved swiftly. Self-sufficiency. Self-knowledge. I possessed these things that are synonymous with being a New Yorker.

The traumatized little girl that I was needed the comfort of refilling MetroCards, lit skyscrapers, and crowds of tourists in my way to heal. Compassionate. Carrying the stick figures I saw and the bones I heard forever with me. Carrying those people. Those people are omnipresent. They live in the streetlights and sidewalks. They live in me. Aware. Perceptive. Tragedies happen every day. Somewhere in the Middle East, our country is conducting drone strikes. A woman in a hijab buying groceries gets a dirty look. A mosque is surveilled. People’s place of prayer is compromised. Prejudice and ignorance is mistaken for patriotism. Those people carry the stick figures and the bones with them forever, too.

Those who have lost loved ones visit the memorial. Another tourist attraction. No Statue of Liberty or Empire State Building. This is somber. This is the sirens never stopping and the smell of death. Somehow, the day is now history. People travel from all over the country, all over the world, to see this exhibit. To feel the exhibit. This is my neighborhood. Preschool. Elementary. Middle. High school. Grocery store. Friends. Home. A headline. A live news report. A conspiracy documentary on Netflix. Graduating high school. Never wearing a kilt again. Never wearing knee socks again. Carrying the people who died. Carrying knowledge of who I am. My New York will never be a terrorist attack. It is complexity. It is empathy. My Manhattan is me.

Brianna Parker’s essay is but one example of the powerful writing of UMass Amherst students. Written for Englwrit 112: College Writing, it was first published in the 40th edition of the UMass Amherst Student Writing Anthology. The anthology is required in all first-year writing courses, so if you were a freshman in the past few decades, you may recall reading an earlier version.

UMass Amherst has been nationally recognized for its long-standing tradition of making reading the writing of fellow students central to writing education. In 1982, UMass established its Writing Program and was among the first universities to institute a two-part, multiyear writing requirement for all undergraduates. Since then, students have taken an introductory course in general academic writing in their first year and an advanced writing course focused on their major and taught by faculty in their major in their junior year. In these courses, students move from generating ideas to revising drafts to publishing their work, engaging with increasingly complex ideas and research as they write for different audiences in different contexts.

The prominent scholars who have directed the UMass Writing Program over the years have shared the conviction that it is important to teach students that their writing can have an impact in the world. They have long encouraged students to draw on their personal experiences and experiment with style and structure, resulting in writing as compelling as Brianna Parker’s “My Manhattan.”

College of Humanities and Fine Arts|English|Students
Back to top