The Art of Curating

WORKING WITH AN IMPRESSIVE COLLECTION OF AFRICAN ART, STUDENT CURATORS CREATE AN EXHIBITION THAT EXPLORES AUTHENTICITY AND NATIONALITY. 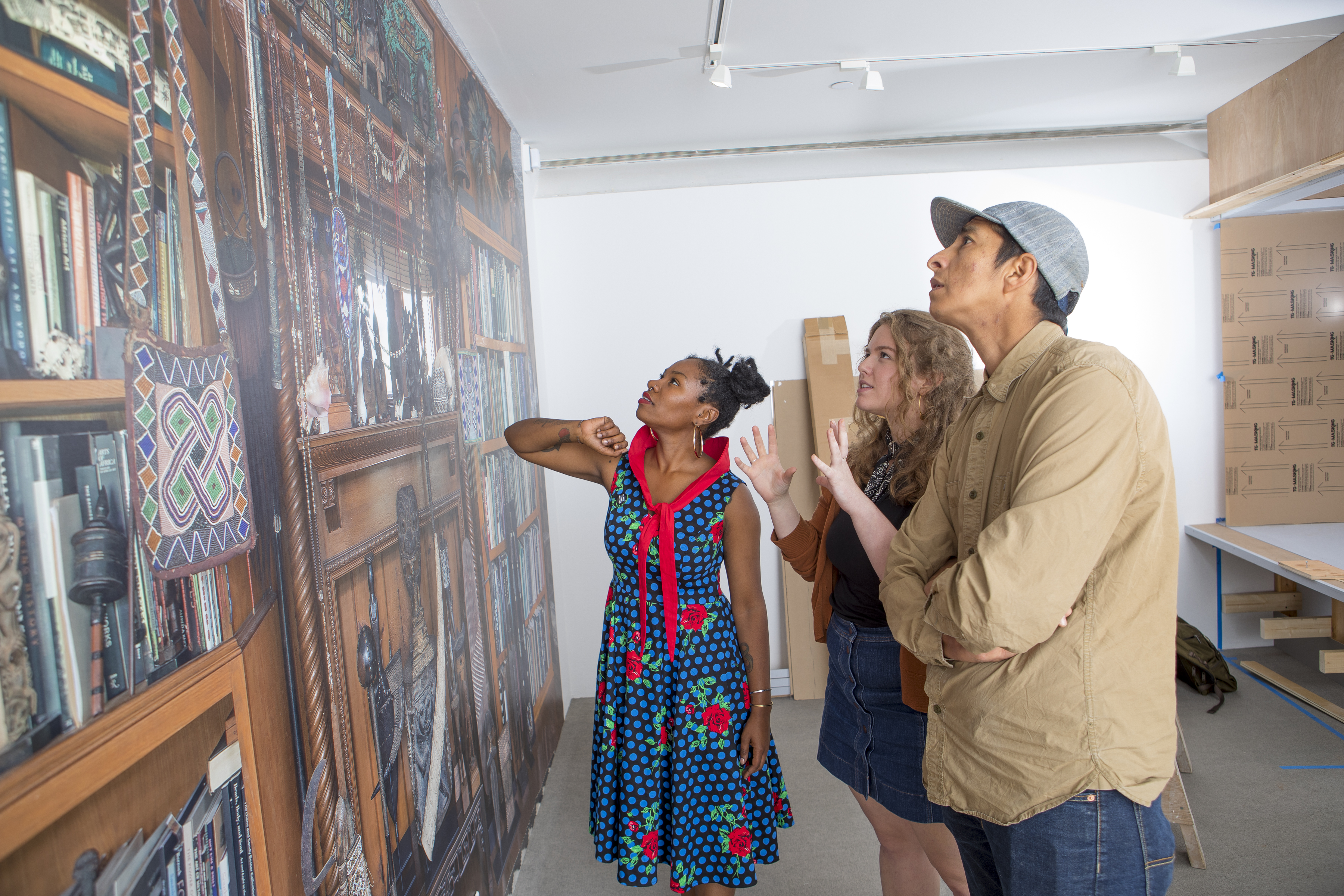 Student curators regard a photo mural, part of the exhibition 5 Takes on African Art: Exploring the Charles Derby Collection. From left: Kiara Hll, Elizabeth Upenieks, and Vick Quezada. The show will be on view at the University Museum of Contemporary Art through the spring semester.

When you visit a museum gallery, do you take what you’re seeing for granted and simply look at the objects? Or are you aware that the exhibition you’re moving through is a work of art in itself, painstakingly selected and arranged by curators to create a cumulative effect?

The University Museum of Contemporary Art’s annual Curatorial Fellowship Exhibition, now in its 10th year, gives graduate students the opportunity to extend their wings as curator-creators.

My lens was, what stories can I tell, what narratives can I bring out?

Each curator was given a room, with the rooms existing in conversation with each other. The entire exhibition is “hugged,” in the words of curator Kiara Hill, by the flags of 42 African nations, drained of their colors and rendered only with their black-and-white graphic elements, by contemporary artist Fred Wilson. Wilson is known for his striking visual inquiries into ways museums present and tacitly enforce a civilization’s values.

Curator Yingxi Lucy Gong ’17G, who now manages a contemporary art gallery in Bridgehampton, New York, describes the beginning of the group’s collaborative process: curators would pull from Derby’s home collection, and he would then arrange the objects they had selected to further inspire the connections they made between objects. “Collectors decide how to show to curators,” she explains, “and curators are influenced by that.” Gong’s own “take” focuses on the personality of Derby, who has been collecting African art since he graduated from UMass Amherst in 1970. Gong was fascinated to observe the interaction of the other curators with the collector: “I learned so much from my fellow curators. They all have different opinions. I loved hearing their conversations with Charlie.” 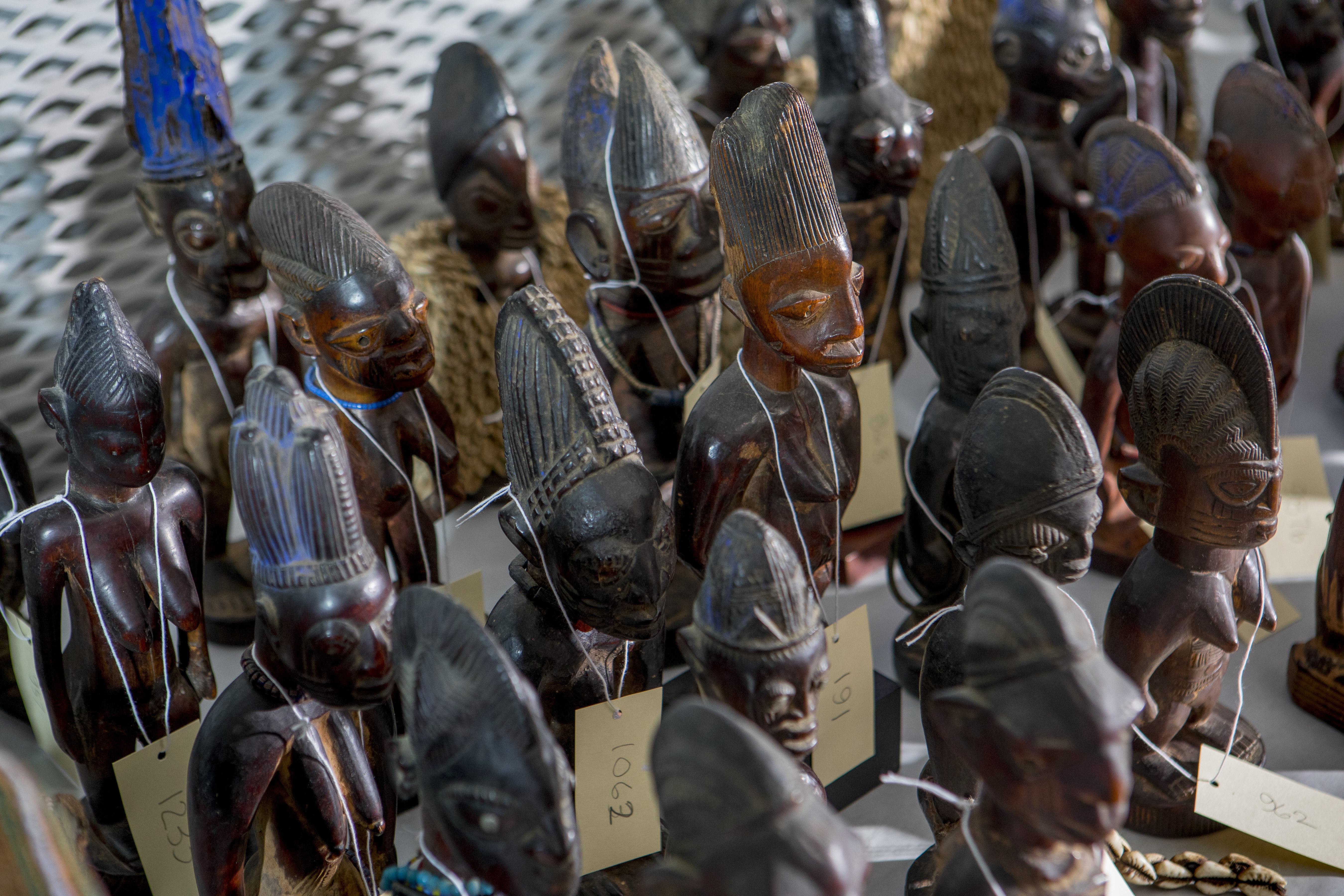 Hill relates her experience of beholding the collection, “When I first walked into Charlie’s house, it was like an amusement park for me—there were so many things around!” Hill chose to focus her selections on the life experiences of black women. She explains, “My lens was, what stories can I tell, what narratives can I bring out? What would help me remedy this bifurcated identity that I have as an African American woman?” Curator Vick Quezada chose to home in on material culture—the life of everyday objects moved from their point of origin, and how they’re now used and valued differently from the intent of their creation. And curator Elizabeth Upenieks explored the idea of authenticity. For instance, what makes one object—say, a ceremonial stool—“authentic,” yet another identical object “tourist art”?

Then came time to put the exhibition together. “There were such interesting interactions and conversations between fellow curators, different dynamics among curators,” relates Gong. “We discussed what’s in your group, what’s in my group, what connection can we make in our labels. We tried to avoid picking out things of the same type, not to repeat one visual too many times in the same gallery, and we all present our objects in very different ways.”

Revision is part of the creative process. The curators found themselves refining selections to bring the components of the show into harmony while sustaining individual visions. Quezada had to make a critical decision to omit some research that wouldn’t fit. Hill scrapped a concept of a war scene. And one piece ended up migrating to another curator’s room. “It taught me a lot about this idea,” reflects Hill, “that if the logistics aren’t right, you have to adapt. I decided to go with all feminine pieces, women’s bodies, inspired by West African cosmology.”

The result of this intricate, creatively charged process is a multidimensional show with the complexity to do justice to a huge, diverse continent. “Given the multiple doors that we’re opening,” says Quezada, “one person alone wouldn’t have been able to tell these multiple stories.”

At the next installation you visit, notice how people move through the gallery. Notice how works are juxtaposed and how different works interact through color and theme. Your experience is the product of much deliberation on the part of the curator.

Cohering five distinct visions into a whole that is greater than the sum of its parts was a challenge that proved rewarding for the curatorial group. “In some cases, that has caused us to have two- and three-hour meetings,” smiles Hill, “but that’s helped us step into the blind spots that we all have.”

“Negotiating five different curators’ takes, there were many different iterations,” adds Upenieks. “But we never competed with each other. Often, we would end up sticking up for each other.”