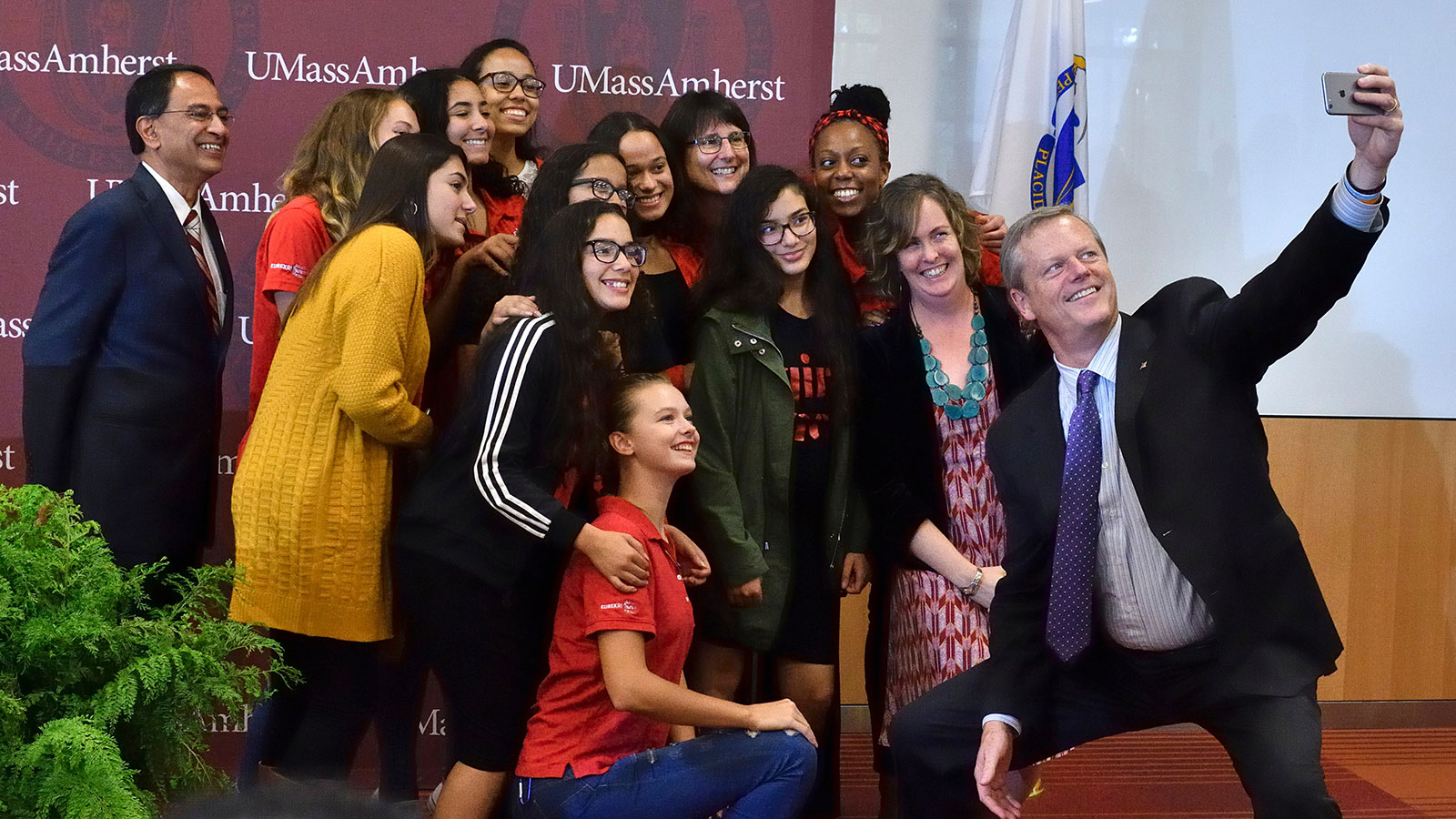 Say, “Careers of the future!”

Governor Charlie Baker came to campus this fall to announce a $500,000 grant for UMass Amherst from the Massachusetts Manufacturing Innovation Initiative (M2I2).

The grant is part of a package of $6.98 million in state funds awarded to seven advanced manufacturing projects. The UMass grant will support work by researchers led by polymer scientist James Watkins in flexible hybrid electronics. Through its Center for Hierarchical Manufacturing, UMass works with manufacturers to make roll-to-roll printed flexible nano-batteries, antennas, leads, and sensors. New flexible hybrid electronics in the works at the campus’s Institute for Applied Life Sciences (IALS) include intelligent skin patches that can monitor activity and levels of glucose, stress, and medication.

High-tech workers of the future, members of Girls Inc., the nonprofit group that encourages leadership, posed with the governor. 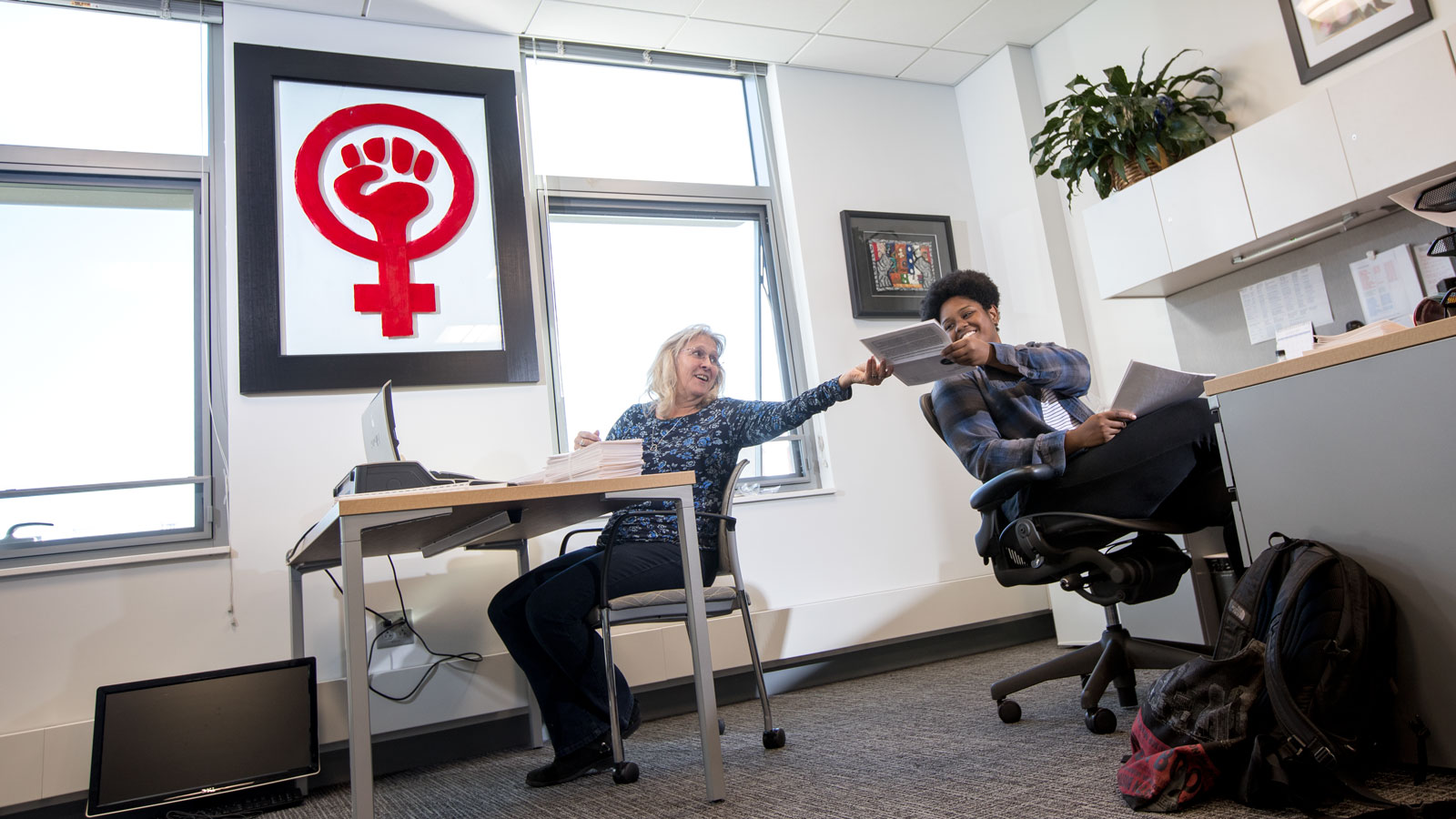 For more than 40 years, a window painted with a red clenched fist inside the Venus symbol beckoned students looking for women’s studies to the second floor of Bartlett Hall. The fist also served, in no uncertain terms, as a powerful feminist icon. Over the years, the pioneering UMass Amherst women’s studies program, founded in 1974, evolved into the Department of Women, Gender, Sexuality Studies (WGSS), with scholarship on women and gender in relation to race, class, and sexuality. Though changes were plenty, the highly visible hand-painted fist was a constant.

“There was nothing timid about this as a symbol of feminism,” says Laura Briggs, WGSS chair. “It referred to uprooting sexism root and branch, from racism to capitalism to nationalism, as sources of women’s oppression.”

When WGSS moved from Bartlett to the renovated and expanded South College in early 2017, Linda Hillenbrand, business manager for WGSS and a 23-year department employee, championed saving the fist.  “It is our history,” Hillenbrand says. “It is who we are. It should come to our new office.”

Hillenbrand says her efforts met with benign resistance, but nevertheless she persisted. She found an ally in Melissa Bergeron, customer service manager in the Physical Plant. In the end, WGSS raised from alumni and friends a portion of the cost to remove the window, and the Physical Plant’s alterations department built a poplar wood frame for it.

The fist now hangs on a wall in the department’s South College office, an inspiration for students, faculty, staff, and visitors. “It feels like an old friend has come home,” notes Hillenbrand. —Judith B. Cameron ’16G 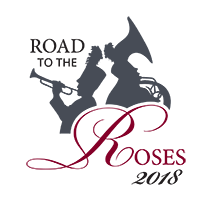 After being selected a year ago for the honor, the Minuteman Marching Band is ready for its most-watched performance ever—the 2018 Tournament of Roses parade. Millions around the world will see and hear the Power and Class of New England along the challenging 5.5-mile parade route. They’ll be looking sharp: thanks to generous donors, all 410 band members will sport new uniforms when the parade kicks off in Pasadena, California, at 11 a.m. EST on New Year’s Day.

Around the Pond
Back to top