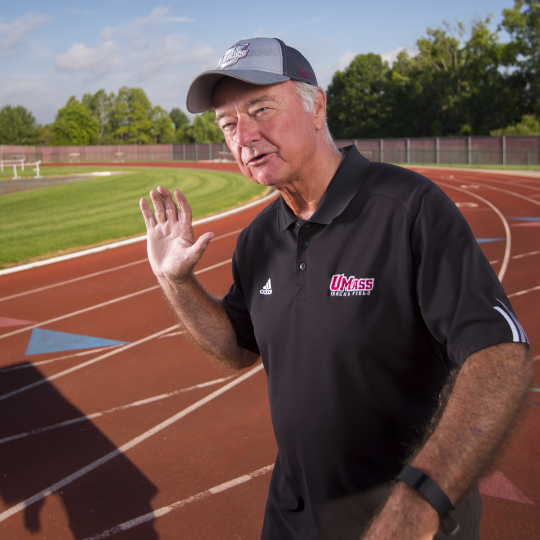 When men’s track and field and cross country coach Ken O’Brien ’63 arrived on the University of Massachusetts campus as a student in the fall of 1959, he came to play sports and become a physical education teacher and coach. A four-sport standout athlete at Foxboro High School, he hadn’t decided which sport he wanted to play and he wasn’t even sure how to try out for a team. So on the first day of school he went to Curry Hicks, home to all the coaches’ offices, and approached the first person he saw who looked like a coach. Come back at 2:30 ready to run he was told. Without knowing what sport he was getting into, he returned at the appointed time and with some other students was driven five miles from campus. Run back to campus, they were instructed, and “if you make it before five, you can get dinner.”

He quickly learned he had joined the cross country team. So began O’Brien’s long career at UMass Amherst, first as an athlete, and then as a coach, interrupted for only a couple of years at Ohio University to get his master’s degree and a year as head track coach at the University of Bridgeport. He returned to UMass in 1966 as assistant cross country and track and field coach, and 18 months later was named head coach, a position he has held ever since.

“It was the perfect place for my family and me,” says O’Brien, of UMass and the Pioneer Valley. Perfect, indeed. He began his 50th season coaching at UMass Amherst this fall, and in that time, in addition to coach, he has been advisor and mentor to thousands of student-athletes. His teams have been successful, winning Yankee Conference, Atlantic 10, New England, and IC4A championships, and individual athletes have fared well at NCAA championship meets. He has had six All-Americans, and has been honored as NCAA District 1, New England, and A-10 Coach of the Year. He also started the women’s cross country and track and field teams in 1975–1976 and coached them for more than a decade.

O’Brien continues to put in long days and weeks; his athletes compete in all three seasons. “Cross country starts the first weekend of the fall semester and we usually have our last track meet the weekend of Commencement,” he says.

He still gets excited when athletes make a breakthrough. “It’s like I’ve also reached that moment. I like to see them get it and that I might have helped turned the light on,” he says. “I am devastated if I can’t find a way to help a student. I really feel as though, given a little time, I can help anybody reach their goals.”

“Working with UMass kids is really fun,” he says. “It’s also very, very rewarding. I am in a place where there are great kids, and I can be a part of their success.”

View a video on Ken O’Brien’s 50 years of coaching produced by the Atlantic 10 Conference. 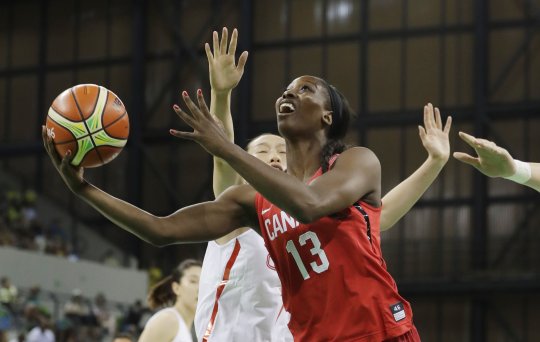 Former UMass women’s basketball standout Tamara Tatham ’07 returned to the Olympic stage this summer for the second time as a member of the Canadian National Team. Her best performance of the games came in the team’s 90–68 opening match win against China, when she led the team in scoring with 20 points. She played in all six of her team’s games in Rio, and has played in more than 150 international games for Canada since 2005. Last year she led the Canadian team to its first-ever gold medal at the Pan American games and was named a tournament all-star when the team went undefeated to win the 2015 FIBA Americas Women’s Championship and qualify for the Rio Olympics. She and her sister Alisha ’08 run Love, Live, Hoop, a program to help young female basketball players in their athletic and personal development. 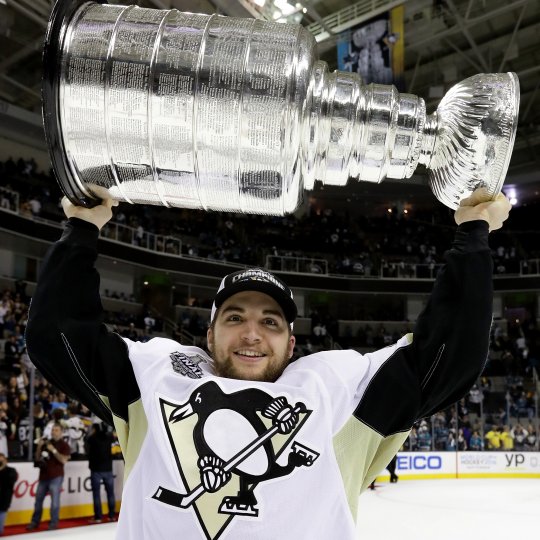 It was quite a year for former UMass hockey captain Conor Sheary. In July 2015, he signed a two-year contract with the Pittsburgh Penguins, who had previously signed him to an amateur tryout agreement after his senior season in 2014. He began the 2015–2016 season with the Penguins’ AHL farm affiliate in Wilkes Barre/Scranton and ended the season winning the Stanley Cup with the Penguins, defeating the San Jose Sharks, and fellow UMass hockey alumnus Justin Braun ’10, in the six-game championship series. Along the way, the 5'8" rookie from Melrose, Mass., played an important role in the Penguins’ midseason turnaround and ultimate success. He played left wing on the Penguins’ top line alongside NHL all-star Sidney Crosby, scored his first NHL goal against the Boston Bruins in his second NHL game, and tallied seven goals and three assists in 44 regular season games. He impressed further in the play-offs scoring four goals, including the game winner in overtime of Game 2 of the Stanley Cup Final, and six assists, including one on the eventual cup clincher in Game 6.