Examining campus architecture and its legacy 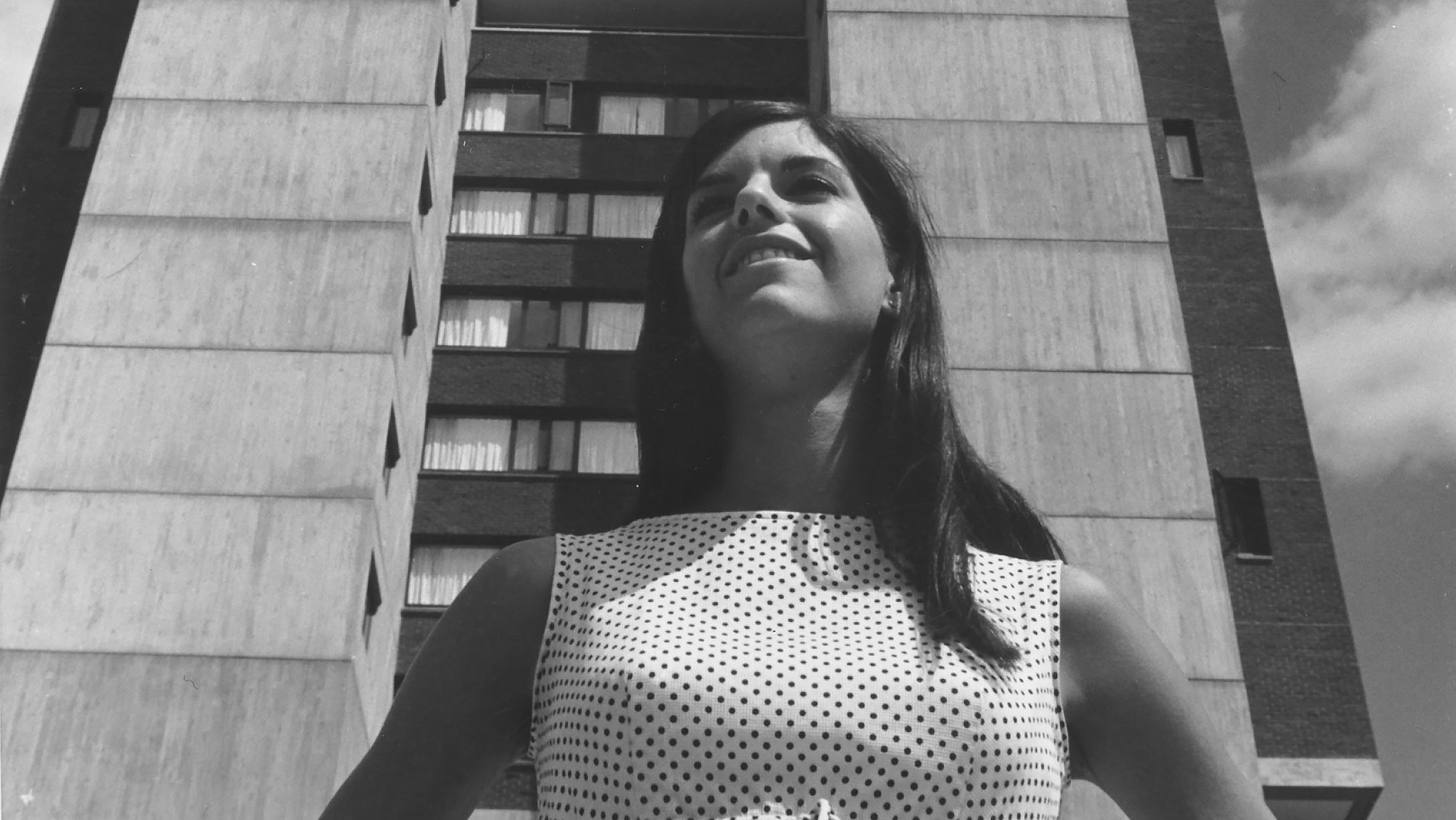 Here’s what we know. She’s tall—or at least seems to be, given the perspective of the photo. Her expression suggests strength, confidence, maybe a fun sense of humor. She’s young and attractive. And she’s almost certainly a UMass student. But we don’t know her name.

The photo featuring this mystery woman is part of “Standing in Silhouette: The Southwest Dormitories at UMass,” a photo exhibition on display during a symposium on campus this fall on Brutalism. The building behind our mystery woman could be described much the same way as her: tall, strong, with a reputation for being fun. Back in the early ’70s, this distinctive structure, designed by the late, great Hugh Stubbins, was young. Architecture nerds definitely find it attractive. And in this case, we do know the name: it’s the Southwest Residential Complex, a fixture of UMass culture for 50 years and a beacon throughout Amherst. But like the young woman standing in front of it, this building is more than it appears.

The architectural style that had its heyday in the mid-20th century, Brutalism is “a term with complicated origins,” says Timothy M. Rohan, Associate Professor in the Department of the History of Art and Architecture. “It generally refers to large-scale concrete buildings of the ’60s and ’70s.” The Southwest is not the only example of Brutalism on campus; the Murray D. Lincoln Campus Center, designed by Marcel Breuer, also falls into that camp.

Situated on about 30 acres and packing in 5,500 residents, “The Southwest is very successful at what a lot of Brutalist buildings were successful at—housing and containing many very complex functions for a rapidly developing society,” says Rohan. “The towers efficiently accommodate many people and also symbolically signal that it has the complexity of a city. The Southwest is a striking landmark for the campus, visible from afar. It’s beautifully situated on its site, and fits in well despite its great size.”

Rohan had assigned the Southwest as a study problem in some of his classes, and in January 2020, he approached a couple of his architecture students, Callie Krekorian ’20 and Jordan Marie Luther ’21, to help put together a small exhibition as part of an independent study. “We wanted something to accompany the symposium and engage students,” says Rohan. “Callie and Jordan were architecture majors and art history minors, so they had feet in both camps.”

Soon, however, things on campus—and everywhere else—began shutting down. “Suddenly we couldn’t actually visit the Southwest, so we relied on an extant archive of photos taken by the university for publicity when the building was first completed,” Rohan explains. But this restriction led to some happy surprises. “We discovered all these wonderful images of people dining, looking out windows, and doing all sorts of things. The architecture in these photos is inspiring and suggests hope and wonder. There are beautiful nighttime photos,” he says. “These black-and-white images resonated with us.”

As time went by, though, an obvious absence became apparent. “The photos always focus on attractive, white, middle-class students,” Rohan says. “A lot of people are left out. We recognized that we were looking at an archive of approved photos. We tried to understand who else was there, doing other things.”

In fact, the Southwest became home to several cultural centers, starting as early as 1971 with the Malcolm X Cultural Center, then the Stonewall Center in the ’80s and the Latinx American Cultural Center in the mid-’90s. But there’s little hint of that in the archive. “What we didn’t want to do was to promote the ideal of the past,” says Krekorian. “We wanted to take a stance on it.”

Luther points out that the forced pause of the pandemic allowed for more time to delve into this idea. “It was much less rushed. We’ve definitely had more time to investigate difficult subjects.” Looking beyond the archive, they included recent color photos of the Southwest, which illustrated how it has become more diverse.

Thanks to this project, we know more than ever about the Southwest. But the woman in front of it—the person that building is meant to serve—is still a mystery. “The exhibition is named ‘Standing in Silhouette’ because there are two silhouettes here,” points out Rohan. “The woman and the tower. Through the photo we begin to understand that the tower, and the complex, is really about people like her. But we don’t know who she is.”

Can you help solve this mystery? If you recognize the person in the photograph, contact Timothy Rohan at tmrohan@umass.edu to let us know!

The “Standing in Silhouette: The Southwest Dormitories at UMass” exhibition is on display in Fall 2021 in conjunction with the symposium at UMass Amherst and UMass Dartmouth, "Brutalism and the Public University: Past, Present and Future," October 22-23, 2021. Opening reception: Greenbaum Gallery, November 6, 2021.