I am interested in all aspects of zoonotic disease.  Zoonotic diseases are those originating and/or being maintained in natural animal populations, but which occasionally spill over into human populations.  The case might be made that all infectious diseases have their ultimate origin from zoonotic sources (since humans have only been around for a very short time), though many have left their animal hosts behind and now have an anthropophilic lifestyle.  I seek to better understand how the agents of these diseases (microbes) have adapted to making their livelihood at the expense of their hosts (animals and humans).  These adaptive sequences are likely to be very complicated and involve multiple steps in the biological hierarchy from molecular adaptations that facilitate cell invasion to ecological adaptations that ensure microbes are in the right place at the right time to be able to infect their hosts.  So too, these adaptive processes may have occurred over the long haul of evolution whereby the microbe and its host have engaged in a co-evolutionary arms race for millions of years; or, as in the case of emerging disease, the co-existence of microbe and host may be a very recent consequence of changed environmental circumstance.

The diseases we study primarily in my lab are vector-borne zoonoses, i.e. those whose transmission is facilitated by a blood feeding arthropod.  In particular, we have focused most of our efforts on study of Lyme Borreliosis (Lyme Disease) and human malaria..  In past work, we’ve shown the relationships of human and non-human primate malarias and used tools of population genetics to establish that our deadliest parasites have a recent origin.  We’ve also looked at phylogenetic origins of ticks as well as the mechanisms that drive genetic diversity and differentiation in Borrelia.  While my formal training and background is in molecular evolution/population genetics, I don’t feel constrained by any particular disciplinary boundaries

In recent years, my research focus has taken a more applied bent.  We are now studying not just the basic biology of these pathogens and their transmission, but also investigating means of intervening.  In malaria, we’ve been working for a couple of years now on a whole plant therapy that holds great promise in killing malaria parasites but also shows some resilience to evolving parasite resistance.  In the realm of tick-borne diseases, we’ve engaged a first-of-its-kind passive surveillance for established (eg. Lyme) and emerging (eg. Anaplasma, Babesia, and Bartonella) pathogens in the range of human-biting ticks.  From that work we’re finding spread of emergent pathogens and that in turn drives our efforts to learn the causes of that spread.

There is always a diverse array of projects in the lab.  These tend to be multidisciplinary (I coined the term “Medical Zoology” to describe the approach) more than interdisciplinary.  The work of the lab often extends beyond the lab and includes field experimentation and collection (from Athol to Africa and lots of places in between).  I welcome prospective students and/or post-docs with common interests to contact me and discuss opportunities for joining the group.  In science I am incurably curious and always looking for new questions to ask and answer. 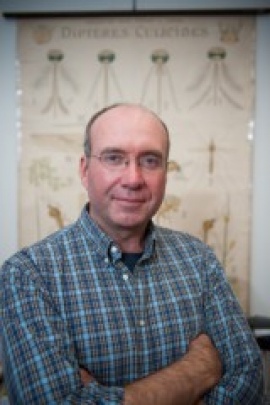