My research group works on various lyotropic liquid crystal materials and their applications in biology related scenarios. We focus on bridging the macroscopic properties of the liquid crystal phase with the microscopic particle features to understand their anisotropic viscoelastic properties. These findings help us understand their interactions with biological micro-swimmers, such as bacteria. We are interested in creating various systems to "domesticate"  biological micro-swimmers as engine, as cargo carrier, and as various other roles in the microscopic world.

We use lyotropic liquid crystals to host and manipulate biological micro-swimmers. In the system combining lyotropic chromonic liquid crystal with bacteria Bacillus Subtilis, we demonstrated a set of new phenomena in this anisotropic environment, such as 1) bacteria no longer run-and-tumble, but swim smoothly along prescribed trajectories defined by the liquid crystal director, 2) they can carry cargo particles remotely in front of them, 3) their flagella motion can be visualized by the birefringence of the liquid crystal media using simple optical microscope, 4) they obtain much longer range of interaction and move collectively at every low concentration, 5) their flow field drives global pattern formation and creates turbulence states at zero Reynolds number. We are expanding the research to different liquid crystals combined with more exotic swimmers, hoping to find exciting phenomena and novel applications along the way.

More fundamentally, we are interested in studying the physics of various lyotropic liquid crystal systems, from chromonic liquid crystals formed by macromolecular assembly, to graphene oxide suspension formed by atomically thin colloidal flakes. Compared with traditional thermotropic liquid crystals (such as those used in LCD), the lyotropics have very absurd properties. For example, certain deformation mode has a viscosity 10,000 times greater than others, making them fascinating materials by its own rights. Thorough understanding of their properties helps us decipher the hydrodynamics of micro-swimmers in the liquid crystal media, thus guides us better use them as biomaterials for applications. 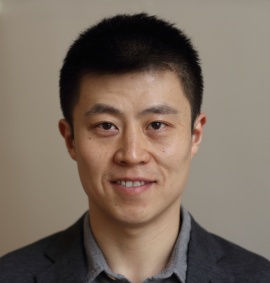