Our laboratory conducts research on fungal and bacterial systems, and on the biochemical mechanisms these organisms use to cause oxidation in substrates. Our current research includes: 1) understanding the mechanisms that fungi use to convert biomass to bio-based products and fuels, 2) examining the role of bacterial symbionts in the gills of marine mollusks that bore into and digest wood, 3) study of fungal disease caused by Cryptococcus spp. in mammalian brain (currently inactive). Although these are seemingly very diverse research areas, the groups of fungi and bacteria that we work with employ unique, and very interesting, redox-cycling chemistries that allow these organisms to cause extracellular oxidative disruption and/or initiate pathogenesis. These mechanisms are the focus of our lab, in-part because they are little studied by other researchers, yet these mechanisms have been shown to cause significant oxidative pathology/damage. For example, fungi that use non-enzymatic chemistries to attack woody biomass cause approximately 80% of decay that occurs in forests in the northern hemisphere. We use biomimicry in the lab to better understand the biochemical mechanisms that the fungi use and how we can modify this chemistry for conversion processes to make bio-based products and biofuels. Biomimicry also allows us to better understand how Cryptococcus generates oxygen radicals in brain tissue and initiates pathogenesis resulting in more than 180,000 human deaths each year. We are also expanding our work on non-enzymatic mechanisms to explore unexplained oxidative action in shipworm (marine mollusk) symbiosis which permits these marine animals to cycle and digest large amounts of woody biomass in the world’s oceans.

Environmental Microbiology: Bioconversion Research
Fungal biodegradation: In biomass deconstruction (bioconversion) research, enzymes are typically used to depolymerize the components of biomass. However, enzymes are too large to penetrate the intact structure of plant/wood cell walls so they are very inefficient in degrading wood. In nature, microorganisms known as "brown rot" fungi have developed a low molecular weight system to generate oxygen radicals that can rapidly penetrate, and then deconstruct, plant cell walls. The low molecular weight system known as the "chelator-mediated Fenton" (CMF) system rapidly depolymerizes the two basic building blocks of wood; cellulose (holocellulose) and lignin. The model brown rot organism that we have used for much of our research, Gloeophyllum trabeum, uses the CMF mechanism, and in our lab we are trying to better understand the chemistry that underpins this mechanism.

Symbiosis between gill-inhabiting bacteria and marine mollusks:  Marine mollusks known as shipworms are the principle degraders of wood in marine environments and they play a critical role in carbon cycling, biodegradation and niche creation in these ecosystems. It is estimated that 70% of the woody biomass from mangrove forests are digested by these animals. However, how that digestion occurs in not well known. Shipworms possess symbiont bacteria, but unlike gut-inhabiting symbionts that are known in other animals, these bacterial symbionts inhabit the shipworm’s gills. We hypothesize and have preliminary data suggesting that some of the unique metabolites secreted by these symbionts participate in a CMF mechanism (see above under Fungal Biodegradation) that promotes the digestion of wood in the gut of the shipworm. Uncovering more about this mechanism is crucial to our understanding of energy flow and carbon cycling from terrestrial to both freshwater and marine systems.

Understanding the Role of Non-enzymatic Mechanisms in Pathogenic Fungi:  In our lab we study a fungal organism that is an important human pathogen, but that evolved from fungi that inhabit forest niches and that decay wood. Cryptococcus neoformans evolved, in ways currently not well understood, to attack the brain and other organs of mammals and other animals by generating oxygen radicals to damage tissue. After invading the lungs of a host, the fungus can move to the brain, and it thrives in the low pH of lysosomes of cells to cause Cryptococcal meningitis; a disease which kills 181,000 people each year. A key focus in this research is exploring whether the “CMF mechanisms”, known to be active in certain brown rot wood decay fungi also play a role in pathogenesis.

View all publications at: https://scholar.google.com/citations?hl=en&user=BD1FWWIAAAAJ&view_op=list_works&sortby=pubdate 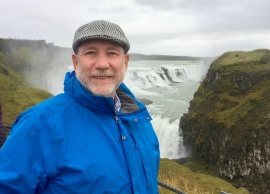