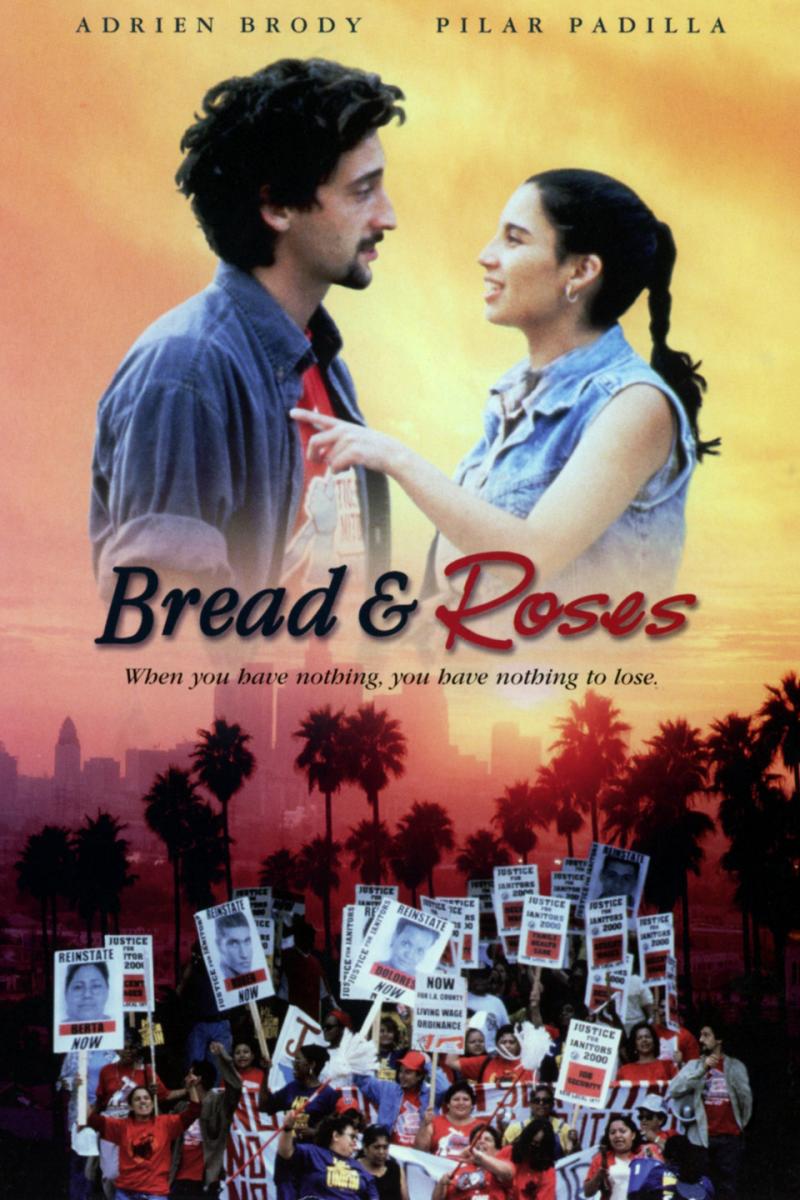 Bread and Roses, directed by Ken Loach, is the story of the campaign to organize undocumented mainly Latino workers in Los Angeles. The film depicts the struggle of poorly paid janitorial workers, their fight for better working conditions and their right to unionize. This film is based on the actual janitors’ strike that took place in the 1990s in Century City Los Angeles; it was called the Justice for Janitors campaign and was part of the national unionization struggles of service employees for better working conditions. The janitors demanded wage increases of more than seven dollars per hour, family health insurance and other benefits.

Local 399 of the Service Employees International Union’s (SEIU) Justice for Janitors campaign was among the first labor organizing efforts to focus on organizing undocumented Latino workers. The campaign’s direct action tactics and large-scale mobilization—as well as the community’s negative reaction to police using clubs to drive back the peaceful protestors, injuring sixteen and arresting forty—created significant awareness of and support in the community for the janitors’ fight.

The impact of this movement lies not only in its emphasis on this group of immigrants, but also the diversity of membership and the union’s work dealing with issues across racial and ethnic lines. Many in the labor movement had argued that janitors were impossible to organize; they were undocumented, part-time, subcontracted workers of color. Local 399, with no illusions about the possibility of success using traditional NLRB election procedures, devised a comprehensive strategy of direct action, legal tactics, public pressure, aggressive worker organizing, community support and corporate strategies. Despite their obvious vulnerability to deportation and other limits on their legal rights, the campaign was a key turning point in mass organizing of low income and immigrant workers, demonstrating clearly that not only could these workers organize, but they could win.

The campaign won a contract from a major building cleaning contractor and union recognition for 6,000 workers. The union won a wage increase of more than twenty-five percent for union and nonunion workers alike. The triumphant conclusion of the two-year Los Angeles-based organizing drive increased janitorial membership in Local 399 to 8000, up from approximately 1,800 five years earlier. This was the largest private-sector union organizing achievement to that date involving mainly Latino immigrant workers.

Director Ken Loach screened Bread and Roses stating that the janitors themselves were the audience he cared most about; a number of them, along with two of the actual Justice for Janitors (JfJ) organizers, played small parts in the film. One of the janitors attending the screening appreciated the film’s accuracy in showing “how hard the work is.” Silfar Honorato went on to say, “Now everyone will see what life is like for us. That’s what I liked about it. Because they took our lives into account and showed that we are human beings too.”

Stephen Lerner, who directed the national Justice for Janitors campaign for the Service Employees International Union, viewed the film with the janitors at that initial LA screening in 2000. “The most important thing out of all this is that it raised expectations, not just for our members but for all low-wage workers, that things can be better,” he reflected. Then, looking forward, he added “The question for us now is: How can the janitors use their newfound strength and popularity and support to build on that success?”