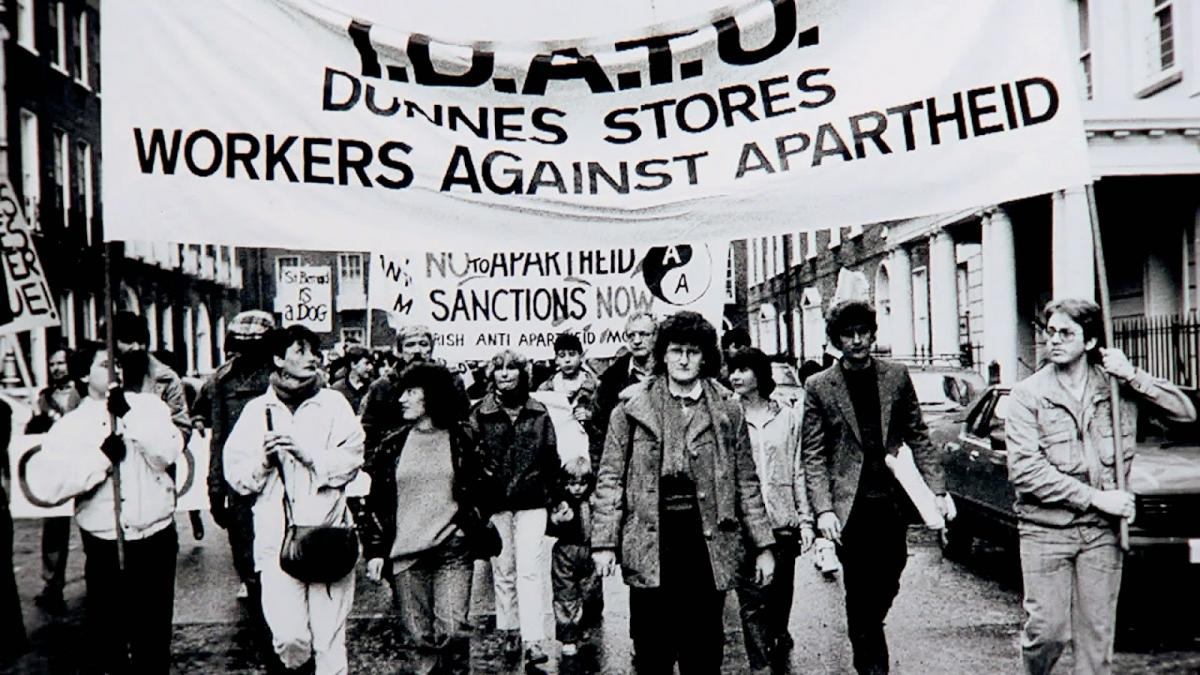 Directed by Sinead O’Brien, Blood Fruit commemorates the 30th anniversary of a strike by Irish grocery workers, eleven young women who refused to sell imported South African fruit. As a result of their fight, in 1987 the Republic of Ireland became the first western country to ban the importation of agricultural products from apartheid South Africa. The film portrays the experiences of the strikers, contextualized by their learning about life in South Africa and the global boycott movement to end apartheid.

In 1984 the Irish Distributive International Trade Union passed a resolution calling on members to refuse to handle South African goods. Dunnes Store shop steward Karen Gearon notes that management treated the workers badly so despite knowing virtually nothing about South Africa or the anti-apartheid movement, there was great energy for direct action. Management threatened the workers about the potential action, only strengthening the workers’ resolve. On July 19, Mary Manning refused to handle two pieces of South African fruit. Management gave Mary five minutes to concede her position. She refused, and the workers walked out.

None of the Dunnes Store workers initially understood the political significance of their action. While they endured harassment on the picket line and by the government, South Africans, black and white, joined them on the picket line, educating them about South Africa and the global anti-apartheid movement. Archbishop Desmond Tutu invited them to South Africa; the government blocked entry, garnering great publicity and making the Dunnes strikers central figures in the global struggle. Nelson Mandela later thanked them and said they helped keep him going while in prison.

The Irish Labor Court issued a ruling in June 1985 supporting the principles of the strike and urging the government to work with supermarket chains to develop a voluntary code of practice around the boycott, but also urging the workers to return to work. In 1986 the national union called an end to the strike as a good faith gesture towards the Irish government, who had been pressured through the spotlight on the strikers to explore establishing a nation-wide boycott. The strikers wanted to remain out, but the national union had the resources and leverage. The strikers went back to work in 1987, and that same year Ireland became the first western country to boycott all South African imports.

Not only did the Dunnes strike have a significant impact in the anti-apartheid movement, it also had a huge impact on the strikers themselves. Despite the harassment and hardships they endured in Ireland, they had no regrets, recognizing they won the long-term battle and learned important lessons about the power of social movement unionism and global solidarity. Former shop steward Gearon, who in recent years has linked their struggle to the present-day BDS movement, has noted the impact the strike had on the growth of the anti-apartheid movement in Ireland. Desmond Tutu sent a statement to be read on the occasion of the Blood Fruitpremiere: “I am delighted that these extraordinary people seem to be finally getting the recognition they so richly deserve. You are part of the history of South Africa’s struggle for freedom. Your stand was a beacon of hope during dark days in our history.”