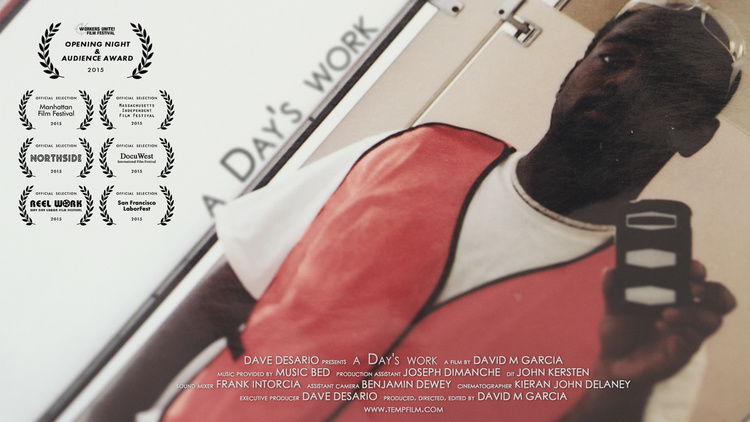 A Day’s Work, directed by Dave DeSario, tells the wrenching story of 21-year-old Day Davis, killed on his first day of work at the Bacardi Bottling plant in Jacksonville, Florida. The documentary follows Day’s sister Antonia as she tries to understand what happened and why. Based in large part on in-depth reporting in ProPublica, the film underscores the issues that led to Day Davis’ death and explores the ways in which today’s $100 billion temporary staffing industry and the companies they work with place millions of workers’ safety, health and lives at risk.

Across America, as the availability of quality jobs has declined, and low- wage temporary work has mushroomed, expanding into almost every economic sector. Approximately three million Americans work through a temporary staffing agency on any given workday, approximately 2% of the total non-farm U.S. workforce.

Throughout the first half of the 1900’s, in the early days of the employment agency business—the forerunner of the modern Temporary Staffing Industry (TSI)—agencies charged workers a direct fee for job placement. The workers then became employees of the companies where they performed their jobs. The agency’s work was done when the worker was connected with an employer.

But this system of temporary staffing bred corruption. Known as “fee-splitting”, agencies and employers frequently conspired to continuously hire and fire workers so fees could be collected over and over again, and fees were then split between the agency and the employer. Despite government intervention post-World War II to limit these abuses, the TSI found ways to avoid regulation and flourish. Throughout the 1960’s, the TSI successfully organized lobbying efforts in all 50 states, resulting in a legal definition of a staffing agency that changed the relationship temporary workers had with their assigned place of work; temporary workers were now employees of the TSI staffing agency, rather than employees of the company where they performed their work on a daily basis.

Under the current legal framework, with direct fees to workers eliminated, temporary workers are paid an average of 22% less for the same work as direct employees and are much less likely to receive benefits of any kind. The savings from the reduction in compensation to workers is essentially split between the agency that legally employs the worker and the client business that uses the worker’s services. Thus, the “fee-splitting” arraignment has taken a new form, but has the practice has remained intact. In addition to the impact on wages, temporary workers become second-class citizens in the workplace as the benefits and required protections linked to direct employee-employer relationships are diluted or non-existent.

A Day’s Work explores the impact of this system on one young worker, while raising issues critical to millions of temporary workers in today’s workforce. In addition to the usual film festival circuit, this documentary has been used as an education and mobilizing tool at dozens of university and union venues across the country.