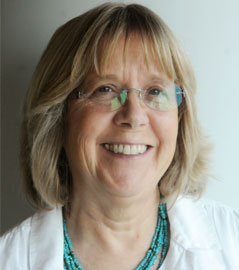 Margaret (Peggy) Speas received her M.A. from the University of Arizona and her Ph.D. from MIT.  In her research on the syntax of natural language, she has focused on the role of functional categories and the basic principles that constrain syntactic structure across languages.  Her publications include work on person, direct discourse, deictics, null pronouns and evidentials, as well as X-Bar Theory and Optimality Theory.  Her syntactic research on the Navajo language led to an interest in understudied languages in general and in community efforts to revitalize endangered languages.  She is a founding member of the Navajo Language Academy and co-author of Diné Bizaad Biínahoo’aah (Rediscovering the Navajo Language), a Navajo language textbook.