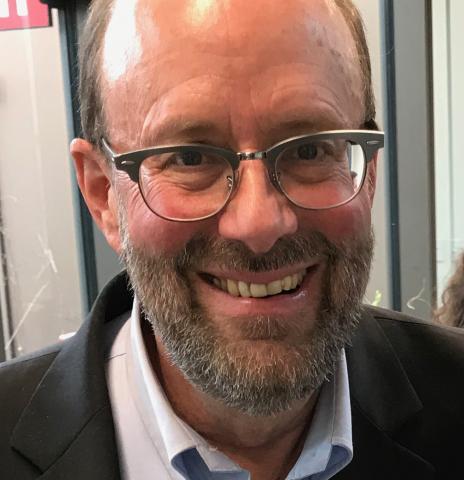 Professor Jack Ahern, FASLA retired at the end of the Spring 2020 semester after 34 years in LARP at the University of Massachusetts Amherst. Jack was the very model of a modern landscape architect, rooted in sustainable design with a passion for plants, landscape ecology, greenway planning, and ecosystem services. He had a positive influence on the thousands of students who took his classes and the ones whom he mentored. There are so many aspects of the landscape architecture program that bear his imprint that it’s impossible to innumerate them all.

Before coming to UMass in 1986, Jack was a registered landscape architect who worked with John Rahenkamp & Associates and also Wallace, Roberts & Todd, both in Philadelphia, PA. He collaborated with Emeritus Professors Mark Lindhult and John Mullen on the award-winning master plan for the UMass Amherst Campus in 1993. The most significant result was a policy for the campus to focus on infill development in the campus core in order to create a more pedestrian friendly environment, reduce travel time, centralize infrastructure, define public spaces and preserve the rural context. The proposed infill framework for the campus served as a blueprint for the campus today and helped guide the placement of over 20 new buildings over the past 27 years - including our own Design Building!

For nine years, Jack was the LARP Department Head while also teaching his beloved “Plants in the Landscape” class. Any grad or undergrad landscape architecture or Stockbridge landscape contracting student experienced this class with the plant walks that Jack orchestrated around campus. Students diligently traversed the campus to see their weekly list of woody plant materials in every weather condition. Other indelible marks that he made with his teaching are Landscape Patterns and Process and his Green Urbanism Seminar. Jack’s most adventurous class was his Landscape Architecture Study Tour in which he took students for two weeks to observe and experience great works of landscape architecture in European cities. Over the years these tours included Amsterdam, Rotterdam, Paris, Milan, Venice, Florence, Rome, Lisbon, Barcelona, Duisburg, Hannover and Berlin. Jack brought his wife Linda along as an additional chaperone and she helped him tremendously with logistics and finding lost students.

After his stint as Department Head, Jack went on to serve as Vice Provost for International Programs for the UMass campus. He provided invaluable service to the profession, the university and his community. One constant with Jack is his care and support for students and their progress in the program and in the profession.

Jack’s professional and academic honors are numerous and well deserved. The most significant are when he was inducted as a Fellow by the American Society of Landscape Architects (FASLA) in 1996, inducted as a Fellow by the Council of Educators in Landscape Architecture in 2011 and received the Fabos Medal for International Landscape and Greenway Planning in 2018. Jack continues to be an incredibly productive scholar who is working on completing his seventh book. He has written numerous reports, journal articles, conference proceedings and monographs. His work has resulted in several national awards and he has been invited to give keynote addresses at international conferences in China, Taiwan, Japan, Hungary, Brazil, Finland, Spain and Portugal. One of his influential articles was “From fail-safe to safe-to-fail: Sustainability and resilience in the new urban world” (Landscape and Urban Planning 100(4):341-343 · April 2011). Using international examples, Jack provided a framework for people to understand the concept of resilience in a new light and students were inspired by the idea of safe-to-fail. Jack is a clear communicator of ideas through his writing and many talks - able to translate complex ideas into easily understandable language.

Jack’s positive outlook, keen wit and great sense of humor puts anyone at ease when they’re with him. Jack is now spending much of his time out on Cape Cod with his wife Linda, enjoying time with his grandchildren and taking up sailing.

Jack will have an enduring legacy in the story of the Department of Landscape Architecture and Regional Planning. His influence will continue through his many successful students’ ongoing design and planning efforts. Congratulations to Jack on his retirement from UMass!