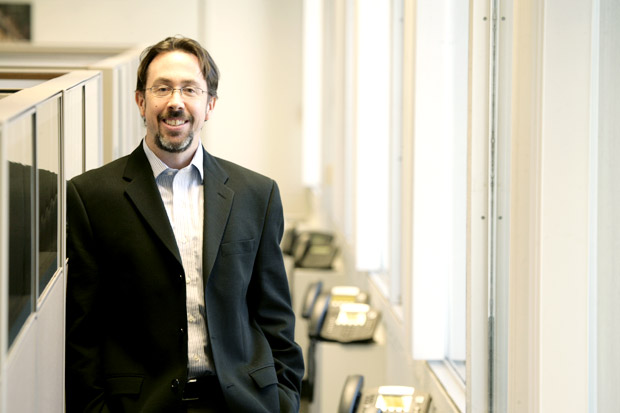 Since 1988 Sean Dandley, class of ’85, has had a front-row seat in the telecommunication industry’s incredible evolution as president and CEO of DSCI Corporation in Waltham, MA.

“The only constant has been change,” Dandley says. “Changes in technology: Internet, cell phones, smart phones, data networks, and so on; changes in the regulatory environment: not so long ago Ma Bell was the only telephone company around, but thanks to legal rulings and deregulation, a multitude of providers, including DSCI, came into existence.”

“I never planned on working in telecom,” he says. “My career planning essentially was a ‘random binomial variable.’” My uncle, also a UMass journalism alumnus, once told me, ‘generalists rule the world.’ In other words, those who are open-minded, nimble of thought, and willing to grow and learn stand the best chance of success. The combination of my liberal arts education, working in residence life, and the discipline gained from ROTC and the Massachusetts Army National Guard allowed me to be an effective, multi-dimensional leader early in my career. The broad worldview honed at UMass has been particularly helpful with the many hats I have to wear.”

Dandley credits UMass Amherst with giving him the foundation to be an entrepreneur, and he and his wife Jayne, class of '85 (School of Nursing), are giving back by endowing an equipment fund for journalism majors.

"We believe that that is important to give others the same chance that UMass provided us," Dandley says. He and his wife are both first-generation college graduates.

“We believe that the future of our society and our nation depends on having an educated and aware population. Although journalism has lost some of its luster and, like many trades, is trying to find its way in the new digital age, the field (with the exception of Fox News) is one of the pillars upon which this education and awareness rests. As for giving back, it is unlikely that Jayne and I will ever be able to repay UMass for all it has done for us, personally and professionally.”

Dandley and Jayne, a year older, dated at Leominster High School before she entered UMass. “I basically stalked her to campus the following year,” he jokes. Both were RAs, he in James house (all male), she in Melville (all female), and dated all through college. They married eventually while he was earning his master’s degree at Bentley.

“Twenty-four years and two kids later, we’re still going strong,” Dandley says. “But if Jayne hadn’t put me through graduate school and stood by me when business wasn’t so hot, there would be no successful business and no ability to give back as we do.”

Since its inception over ten years ago, DSCI’s operative words have been growth, satisfaction, and profitability. Initially reselling telecommunications services from other service providers, DSCI built its own carrier-class IP network in 2005. The company now serves more than 1,100 customers, primarily in Massachusetts, New Hampshire, and Rhode Island, but extends its reach to over 600 cities in 60 countries on 6 continents. In short, DCSI is New England’s premier enterprise-hosted communications provider.

“As a privately held and employee owned company,” Dandley explains, “we have significantly more freedom to make the ‘right’ strategic decisions versus our publicly traded competitors, who must react to the stock exchange bell every morning. Providing cost effective solutions, that help customers work smarter, position their companies, and exceed their expectations, bolsters our own success.”

Besides being tops in customer service, DSCI has been named one of the best places to work in the region—twice—by Boston Business Journal. Employee dedication and commitment is key, Dandley notes. “Take care of your people and they will take care of your customers. It sounds cliché, but an organization that prides itself on service, delivers consistent growth and profitability, and offers one of the best benefits packages in the region results in happy employees.”

Dandley divides his time between monitoring the company’s near-term progress towards achieving quarterly and annual objectives and defining (or redefining) long-term strategic goals. “The former is rather dry and unexciting work, enabled by many reports, team notes, and progress updates that I plow through daily,” Dandley says. “The latter is much more exciting, subjective and fear-inducing. Creating realistic, profitable strategic goals requires input from my excellent senior staff, recognition of changes in customer needs, technology, competition and the regulatory environment, and a handle on the overall economic climate.”

Meanwhile, UMass continues to loom large in the Dandley household. Their two children have also chosen to attend UMass.

“The message that UMass not only made us ‘wicked smaht’ but also made us better people appears to have been communicated,” Dandley says. Daughter Erinn studied biochemical engineering, and son Michael studies studio arts.

"So, whether you’re a biochemist or an artist, UMass has got you covered,” Dandley says.