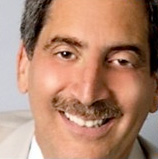 Larry Carpman, class of '75, has scored a notable “First” for Journalism: He is its first graduate ever to be named to the UMass Board of Trustees, on which he served for five years (2011-16). Appointed by Governor Deval Patrick, Carpman is the founder of Carpman Communications. He and his wife Pamela, who has been a photographer at the White House for the global news agency AFP and a prize-winning photographer for the Providence Journal, have two sons. They live in Marshfield, Mass.

“In the spring of 2001, 30 years after I first walked into the Journalism office, I was contacted by David Shribman, a former editor with The Boston Globe, who was working on his book, I Remember My Teacher,” Carpman recalls. “He asked if I had a memory of a teacher that I would contribute to his compilation of teacher memories. It was an easy request for me.”

Carpman picked Howard Ziff, the founder of Journalism at UMass. “He showed me how important passion is in one’s life and studies,” wrote Carpman. “His application of passion was broad. He was passionate about principle and ethics and the need to apply those things. I was your basic college student and, because of him, I realized that you have to really feel things deeply and that, to have fun in life, you have to have impact.”

In the decades after UMass, Carpman’s assignments have included 15 years of work in Washington, DC, first as the press secretary to Senator John Kerry for 12 years and then as Director of Corporate Communications for The Nature Conservancy. “I returned to Boston in 1996 to help Kerry win the Mother of All Senate races [against then Governor William Weld].”

He has remained in the state since. He has been Deval Patrick’s communications advisor in the Governor’s two campaigns and, for the last 14 years, has taught a course at Boston University, “Persuasion and Public Opinion.”

Carpman grew up in the Boston neighborhood of Mattapan and went to the Boston Latin School, the oldest public high school in the country. While taking six years of Latin and two years of Greek, he sparked his interest in Journalism by working on the school newspaper. At UMass, he worked on The Daily Collegian. His reporting included a three-part series on the likely impact of the advent of the first mega-mall on Route 9 in Hadley. He also served as Collegian news editor. “I remember that all work on the paper stopped for 30 minutes at 4:30 so that the editors could watch 'The Three Stooges' on TV.”

More recently, said Carpman, “a few days before my appointment to the board was announced, I got an email out of the blue from a 2010 UMass Amherst graduate asking if I’d speak to him about his career and future. I enjoy talking to ‘kids’ and offering what advice I might have, so I said yes and asked him how he came to connect.  ‘I just looked in the UMass alumni directory and you seemed like a good fit for what I want to do,’ he said.

“For me, UMass Journalism turned out to be a ‘good fit’ for what I now do in my life and career. I can’t wait to return the favor.”