Professor of Arabic and Near Eastern Studies 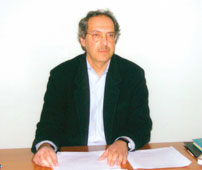 Professor El-Hibri specializes in classical Arabic historiography and in medieval and modern Arabic literature. He is the author of Reinterpreting Islamic Historiography: Harun al-Rashid and the Narrative of the ‘Abbasid Caliphate (Cambridge University Press, 1999), which received the Albert Hourani Award Honorable Mention of the Middle East Studies Association of North America in 2000, and Parable and Politics in Early Islamic History: The Rashidun Caliphs (Columbia University Press, 2010). His published articles and reviews have appeared in Arabica, International Journal of Middle East Studies, Journal of Near Eastern Studies and Journal of the Economic and Social History of the Orient, and The New Cambridge History of Islam (2008).  He has also been consultant on Arabic and Islamic history for the Metropolitan Museum of Art on the exhibition, “al-Andalus: The Arts of Islamic Spain (711-1492).”