In his December 7 seminar on what he termed “Academia’s crisis of relevance” at the Institute for Social Science Research, Professor Andrew Hoffman (University of Michigan) promised to be provocative, in order to push scientists outside of their comfort zones, and scientific institutions into faster change. Hoffman, who earned his BA in chemical engineering from UMass Amherst and his PhD in management/civil & environmental engineering from MIT, quickly delivered on that promise, with a rapid-fire review of studies on the “abysmal state” of public perceptions of science.

The seminar’s 40 participants already know the value of deeper academic engagement with broader publics, but drew a sharp breath at the finding that 52% of registered Republican voters see universities as a negative influence on society.  “The fact that we don’t know this,” he said, “is an indicator of how badly we have lost touch. A big part of our disconnect is self-inflicted. Our norms disconnect us.” In his own extensive public engagement and in his talk made the case that scientists can no longer justify or afford to remain disconnected in this way, and laid out important questions and lessons to help scientists engage the public as experts with communication that is authentic, accessible, and trusted.

Hoffman is the Holcim (US) Professor of Sustainable Enterprise at the University of Michigan; a position that holds joint appointments in the Management & Organizations department at the Stephen M. Ross School of Business and the Sustainable Systems group at the School of Environment and Sustainability. Hoffman drew his audience back to the questions raised by Dr. Jane Lubchenco in her 1997 AAAS Presidential Address, and subsequent work as eminent public scholar and engaged scientist. Her call for a New Social Contract for Science (originally printed in Science in 1998, and usefully updated in remarks at the University of Michigan in 2015) called on scientists to see informing publics beyond the academic disciplines as a central purpose of science. Hoffman noted that those hostile to academic science are all too happy to use its discourses to advance questionable claims—citing the conservative Heartland Institute’s “NIPCC” that mimics the Intergovernmental Panel on Climate Change (IPCC) to lend credibility to climate change denial reports distributed to 125,000 k-12 teachers across the country. Hoffman affirmed that scientists have an obligation to make their work understandable, relevant, and credible. Too often, he said, scientists think it their job to discover and publish for their peers, often only reaching a handful of readers, or none at all. “If the only value of the $400k that goes into publishing in an A-level article in management is to put a line on our resume and establish our place in the pecking order, that’s not good enough.”

To address the crisis of relevance, scientists need to learn to become multi-lingual – speak the nuanced language of science with credible translations into lay discourse. Academics have little training and incentives to be effective in engaging directly with society. This leaves scientific knowledge too often removed from the decisions that could use it. Just as Lubchenco urges scientists to embrace a number of principles for effective engaged science, Hoffman called for further work in the Academy to clarify the “rules of engagement.” He noted that we have several decades of experience, and a base of effective practices that scholars across the natural and social sciences should take up. At an individual level, this includes the simple mental shift to see lay and policymaking publics as able and entitled to both absorb and contribute to scientific knowledge, and to see it as the job of good science to make itself relevant and useful to them. It includes investing in the skills and strategies that make science knowledge “sticky,” or usefully memorable to those who hear it – through effective stories and communication styles. At an institutional level, it means looking critically at the factors that inhibit effective engagement, and creating the reward structures and the platforms that encourage faculty and students to aspire beyond journal publications and citations – including tenure criteria, disciplinary norms and cultures, and protections for scholars who take the risk to inform and engage publics.

As engaged scholarship has become more normative, particularly for younger scholars still seeking to build their academic careers and protect their reputations, the question is not whether, but how to engage. While Public Engagement Project Director Amy Schalet noted that she encourages public scholars to name the implications of their science when they enter the public, there is always the risk of being perceived as partisan in doing so. In his 2007 book (2nd edition forthcoming), Robert Pielke Jr. identified a range of roles that scientists can play in informing the public, and urged scholars to salvage the perceived objectivity of science by shifting from the role of issue advocate to that of “honest broker,” compiling and laying out alternate scientific views.  Ezra Markowitz teaches Pielke’s book, but wondered if the role of honest broker is even viable today, given the polarization of views on science. While Hoffman cautioned about the perils of contributing to partisan science, he noted that “any time you challenge how people think or behave, it is political, and you’re going to get blowback.” By its nature, science has a tendency to destabilize, and thus to be seen as hostile to specific political or economic interests. But in the current climate of “fake news” and “alternate facts,” clear and compelling science communication, together with public engagement in the generation and pursuit of science agendas, can provide an anchor for reasoned debate.

This seminar, co-sponsored by the Institute for Social Science Research, the Public Engagement Project, the Social Science and Environment Network, and the Isenberg School of Management, raised important questions for scientists seeking to redress the Academy’s crisis of legitimacy. Should all scientists be engaging, and with what training and support? What does legitimate scientific engagement look like, and are there forums scientists should not use? How do you phase it into your career or institution’s profile and do it carefully, recognizing your vulnerability? What more can universities and disciplines do to shift the incentives and remove obstacles to public engagement? With the impact factors of most journals ranging between 6 and 8%, and 25% of social science papers never being cited a single time, Hoffman acknowledged that “I don’t have answers for these questions, but we need to have the clarifying conversation.” 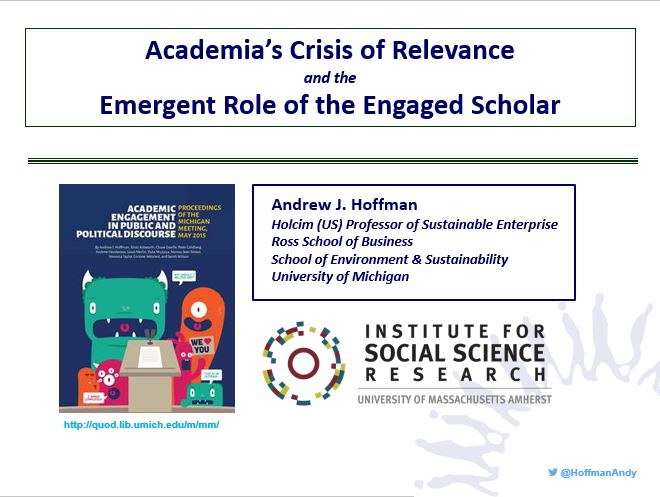 For further reading on Hoffman’s work in this area, see: