We make social science but not out of conditions of our own choosing. While social institutions are a large part of the content of the social worlds that we investigate, our means of investigation are also affected by those very institutions. As social scientists we are thus always at risk of using some concept or idea or theory or instrument that may be ‘doing work’ that we might not first recognize. In other words, we may be unknowing carriers of political forces, intellectual pathologies, or be doing the bidding of some social forces we have inherited from the past. If we are not reflexive about where we come from, where our craft comes from, and how ideas were historically forged. A variety of intellectual traditions deal with these issues quite directly – from critical science studies to postcolonial thought to feminist science studies, for example.  The wager that a lot of these interventions are making are that the particular histories that social science has had has made them bound to the past in ways that need to be minimally recognized, and, more ambitiously, discarded and replaced. Are social scientists fundamentally bound to, or even perniciously trapped by, the history of their disciplines?  How have the social structures we have inherited survived within current thinking?  These are some of the questions that were explored in ISSR's April 3 panel, the final one in its 2019 seminar series on Social Science & Social Location. 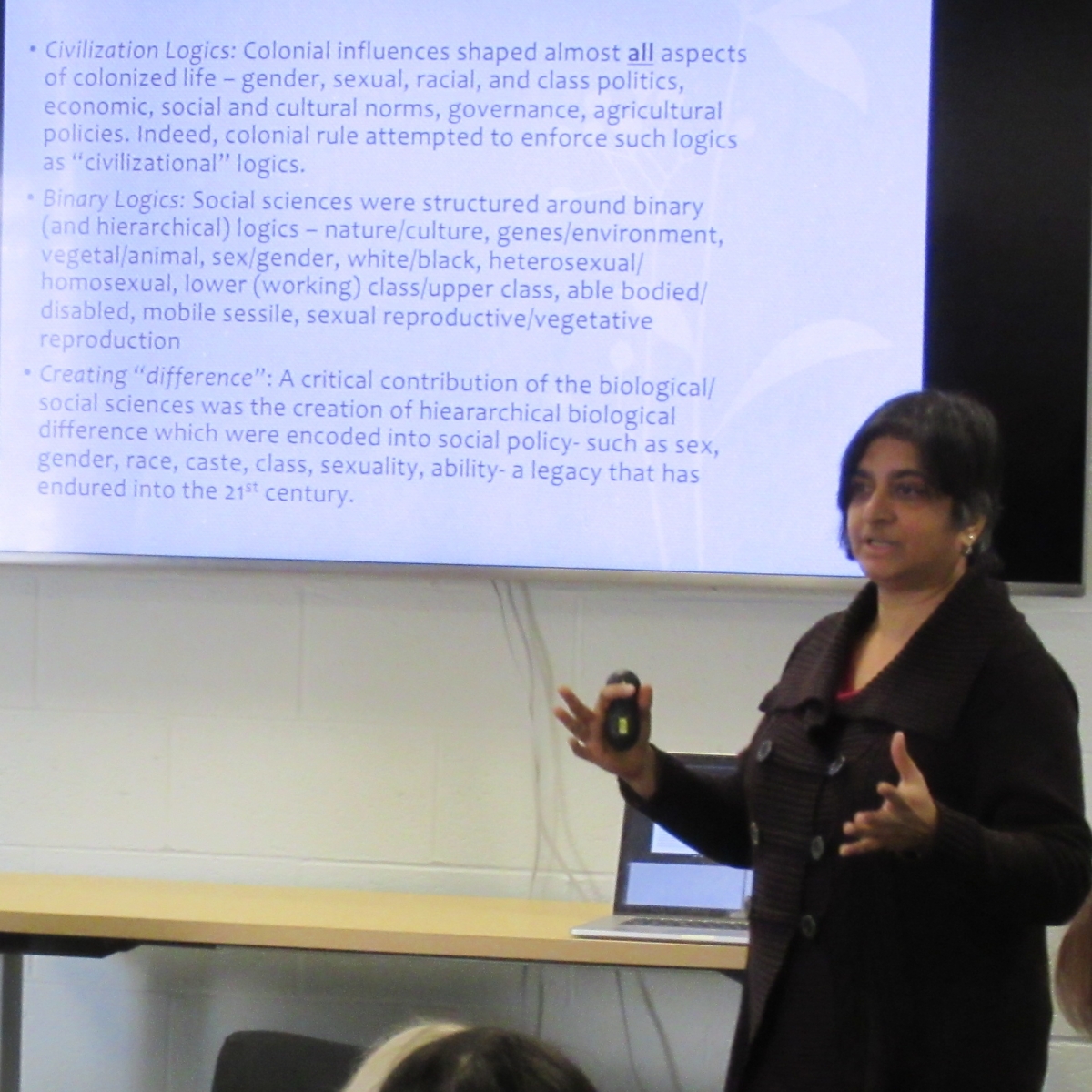 Responding to the event prompt to “be provocative,” Banu Subramaniam pointed to key paradoxes in the social history of science, illustrated by her current project on decolonizing botany. Subramaniam is plant evolutionary biologist and Professor in the Department of Women Gender Sexuality Studies (WGSS) at UMass Amherst, and author of Holy Science: The Biopolitics of Hindu Nationalism (U Washington Press, 2019) and Ghost Stories for Darwin: The Science of Variation and the Politics of Diversity (U Illinois Press, 2014), which won the Ludwik Fleck Prize for the Social Studies of Science for outstanding work across the breadth of Science and Technology Studies.

Subramaniam pointed to how the power and success of colonialism lay in making particular civilizational logics of the colonizing power (generally binary logics of gender, sex, race, and class) appear to be natural and universal ways of understanding natural bodies of all kinds. Colonial science, she argues, infused social theories of sexuality and domination into its account of plant life, as seen in the “lurid romance stories” implied in Linnean taxonomic terms for plant parts (one husband, two wives, etc), and in the parallels between xenophobic languages of human and plant migration (naturalized, invasive, aggressive, stealthy). In turn these naturalized traits framed the objectification, exploitation and commodification required to sustain the extractive economies in the colonies.

While evolutionary biology points to the nonlinear and adaptive reality of natural history, scientists are taught to uphold a linear, meritocratic and hierarchical narrative of scientific progress that ignores the contextual and cultural determinants of an idea’s success or failure. This erasure uses the language of rigor to bolster imperial privilege. She called for greater attention to the existence of alternative approaches to knowledge and truth, in order to see the socially constructed nature of what feels natural to us in the academic social – illustrating with the example contrasting taken-for-granted art preservation in the West with the ephemeral view of equally elaborate art forms like the sand mandala. 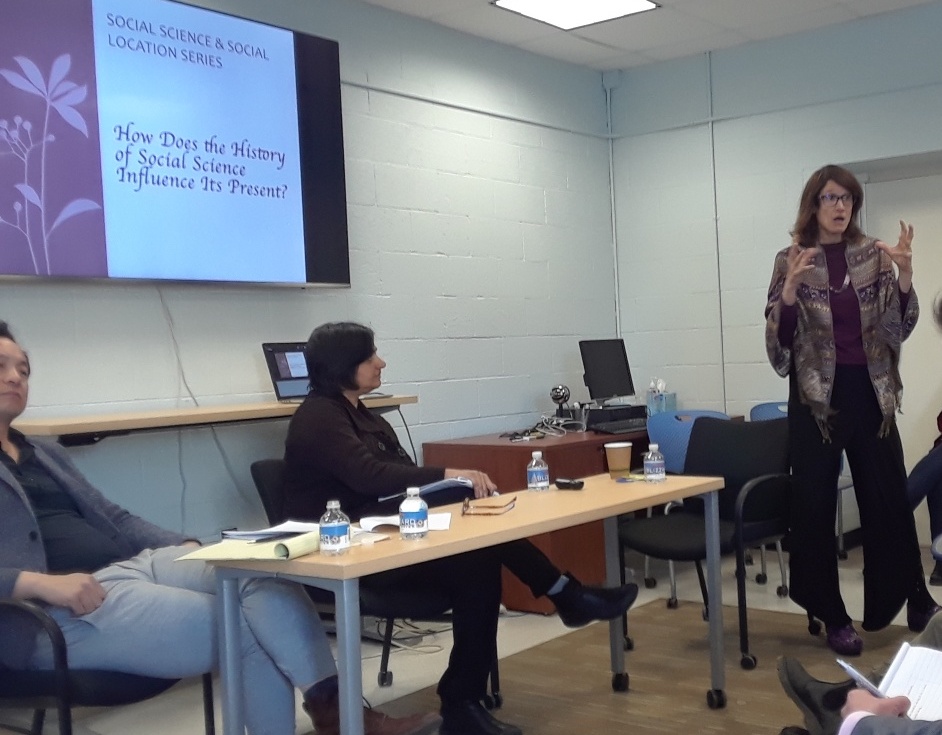 Kelly Moore is Associate Professor in the Department of Sociology at Loyola University Chicago, and currently visiting scholar at UMass Amherst. She works on sociology of science and knowledge and political protest and is interested in the relationship between knowledge and power, especially how scientific tools and frameworks shape power and how they are challenged and transformed. She is the author (most recently) of the Routledge Handbook of Science, Technology and Society (co-edited with Daniel Kleinman, Routledge, 2014) and Disrupting Science: Social Movements, American Scientists, and the Politics of the Military (Princeton University Press, 2008).

In her remarks, Kelly Moore traced her own scholarly interest in what people take for granted, the taken-for-granted forces of domination that shape how we live, what we think and do. In her groundbreaking work in science and technology studies, she has examined the ways that scientists of all kinds – including sociologists – have been aware of these projects of domination, but fail to own their own work as a constituent.

Her current work on wellness in a neoliberal age looks at another project of domination – which is tied up in the growing logic of insecurity. She traced how the militarized language and imagery of insecurity has become an integral part of how societies think about hunger (food insecurity), and health (boot camps and the adaptation of military training programs to popular yoga and pilates programs). Even the ubiquitous treadmill enters daily life from origins in an air force astronaut training center in Texas.

Moore pointed to the ways that C.Wright Mills’ famous description of the purpose of sociology drives an individualized logic – a way we figure out social life by getting inside peoples’ heads. She argues that sociology should turn away from a focus on the individual in society, to look at the nature of relationships that is possible – at scale. One way to do so is to leverage the historical perspective – if we only study the present we tend to study successes, but if we look at the past, we can look at projects that began and didn’t go anywhere, and figure out the forces that shaped it, as well as how its traces echo into the future in spite of its “failure.” 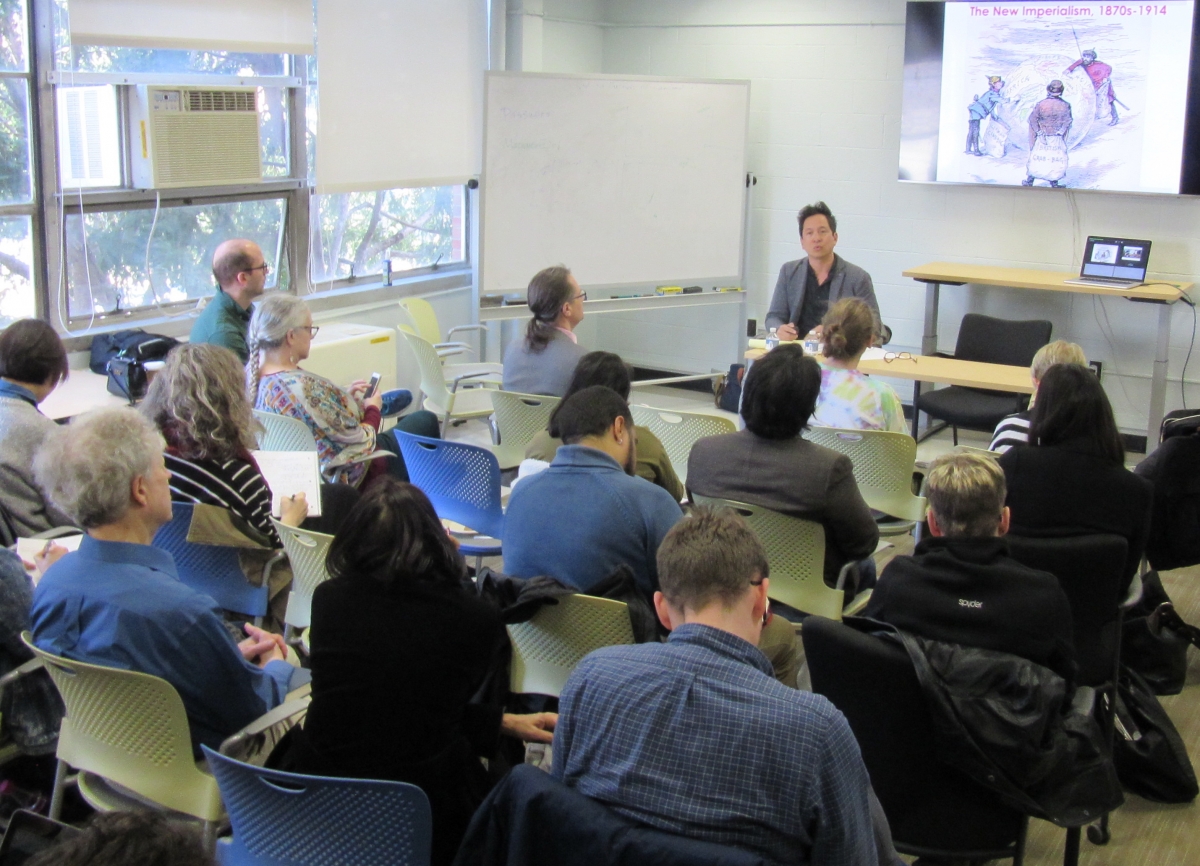 Julian Go is Professor in the Sociology Department at Boston University. He teaches comparative-historical sociology, empires, colonialism and post-colonialism, social theory, politics and culture, and global sociology. He is the Editor of the journal Political Power and Social Theory and the author of Postcolonial Thought and Social Theory (Oxford University Press, 2016), Patterns of Empire: the British and American Empires, 1688 to Present (Cambridge University Press, 2011),   Fielding Transnationalism (co-edited with Monika Krause, Wiley, 2016) and Global Historical Sociology (co-edited with George Lawson, Cambridge University Press, 2017).

In his remarks, Go contended that a key issue is not that history shapes social science, but which history. The social sciences, Go contends, were born in, and, for empire, and their emergence occurs at exactly at the time when empires extending their hands across the world. Thus the social location of social science emerged at the top of empires, in the global Metropole, and at top of domestic hierarchies of race, class, gender as well.  Go argued that the structure of empire is reflected in the structure of both sociology and political science’s founding concepts.

Go reviewed the work of John Burgess, Thomas Hobbes and Max Weber in this respect.  The point is not that pivotal social scientists were racist, but the questions, concerns, theories were embedded in culture of empire, and they can’t do anything but reflect that culture. He emphasized the multiple ways in which we are not beyond the imperial episteme, emphasizing the way the agency of subaltern groups are denied, and a continued ‘metrocentrism’ pervades scholarly work wherein we universalize the particular experiences of the West to explain the rest of the world. A certain kind of delegitimizing the subaltern standpoint has taken place, Go contends, in that it is presumed to be particularistic and provincial, while metropolitan knowledge is equally particular and provincial.

Go also pointed to the contradictions in claims over ‘mesearch’ versus ‘research’, whereby some scholars accuse others of doing subjective, particularistic, partial academic work because of the perception of their marginal, and therefore partial, social position. Go called for a history of social science that can understand and problematize its social location, to provincialize social science, recognize it’s claims to universality as false, recognize all science as provincial/partial, and therefore look to intellectual projects that specifically foster that multipositionality.

In the discussion, researchers in the room probed the challenges of producing social science using established, methods and concepts that we know to be infused with ideologies “not of our choosing.” The speakers emphasized that progress lies in critical consciousness of the nature of the tools we use, and in the use of intentional strategies to disrupt or undercut the normalcy of the knowledge they produce. For example, Subramaniam urged attention to the processes of scholarship, urging more scholars to work in collaboratives/groups, as way of exposing their work to challenges and of eliciting ideas about what norms to break, and what to use. Go suggested enveloping methods like that of comparative historical sociology – which is steeped in a particular vision of nations as separate entities – in a larger search for their interconnections and co-constitutive nature. For all of the panelists, what matters is structuring the inquiry elements of questions, data and analysis so that their particular stances and governing assumptions are more evident, and can thus be unpacked and mitigated.

Social scientists are very much a part of the world they study. They have beliefs and values, are part of communities, and have their own identities. This workshop series focused on the "positionality" of researchers, asking how our social location informs the way in which we go about our scholarly lives, the questions we ask, the approaches we take to inquiry, and the way that we conduct our scholarship more broadly. Please look out for our next series when ISSR resumes its seminar schedule in the fall.