This seminar was the second in our Social Science and Social Location series which focuses on the ‘positionality’ of researchers, asking how our social location informs the way in which we go about our scholarly lives, the questions we ask, the approaches we take to inquiry, and the way that we conduct our scholarship more broadly.

As social scientists we know that powerful and multifaceted social institutions like gender are not just informative of the world we study. Gender also affects, quite powerfully, the way we study what we study – everything from professional norms, promotion patterns, the way we are evaluated as teachers, how academic collaborations happen, how citation patterns work, who gets promoted, who studies what, who gets invited where, who gets mentored how, and much more.

As panelists and many of their remarks and evidence made clear, the role of gender in conditioning scholarship and the profession is both an ethical issue and a scientific-empirical issue. Indeed if there is strong systematic research evidence that gender dynamics affects how scholarship and the profession operates in particular ways, it is incumbent upon us to attend to that in some way, both for reasons of equity and for (social) science.

The panel made clear that the problem with gender in the social science profession is not generally one of overt and conscious resistance. The problem is more multifaceted. In some fields, for example, women study different topics than men, and as Jacobson emphasized, there is evidence that women have different policy beliefs than men, which affects the way that academic knowledge is transmitted to policymakers. Yet in terms of the deployment of particular methods, Htun described new survey research suggesting that, at least in one area of political science that was analyzed, women and men see themselves as equally balanced in terms of quantitative and qualitative techniques. 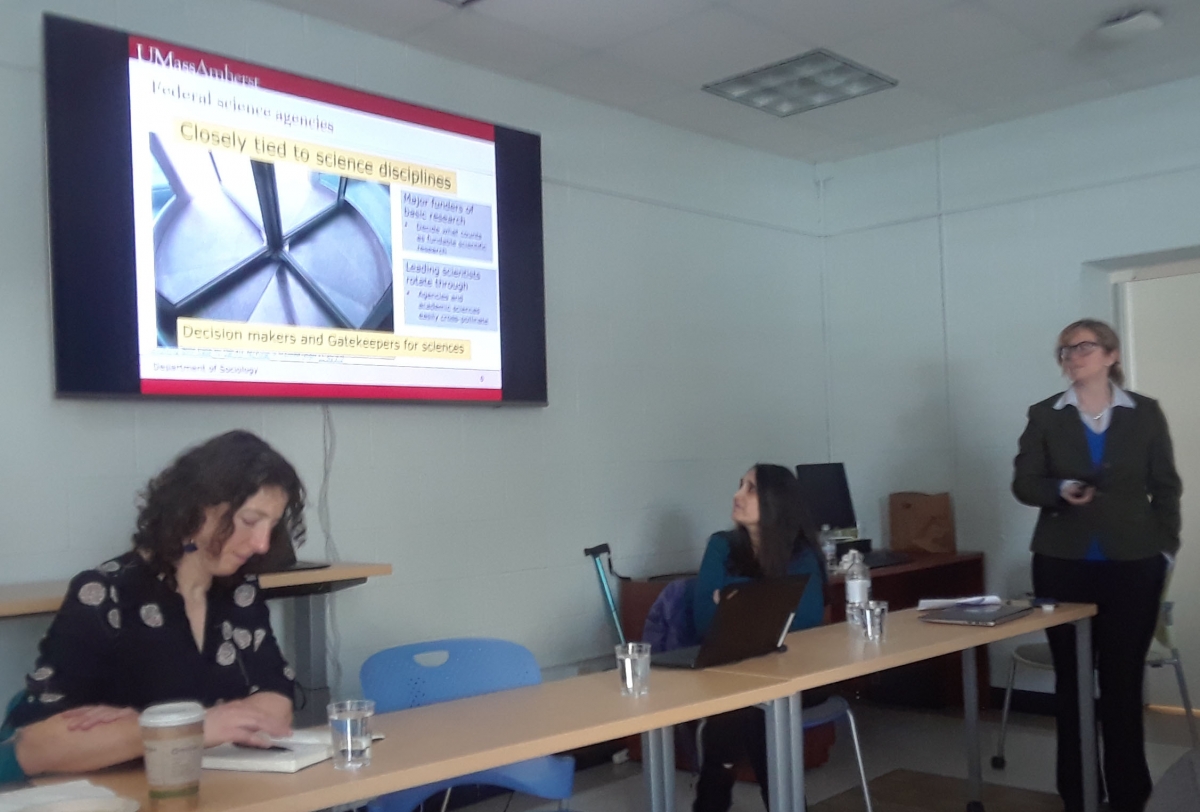 All presenters discussed evidence for citation and publication gaps. Misra described historical evidence for the process whereby the sociology profession confronted issues of gender representation within that field. Htun emphasized new evidence against desirability bias of academics when thinking about prospective job applicants, as well as evidence regarding self-selection into different journals. Smith-Doerr focused on the evidence for pay gaps in government, which generally shouldn’t exist because of equality of pay scheduling, and observed different composition effects based on the gendered dynamics of each federal agency studied.

Panelists and audience members also discussed ways forward, given the evidence of uneven development and multifaceted barriers to progress. Within economics for example there are initiatives in place not just to address a toxic culture but to increase women’s participation at the level of undergraduate training, for example. Htun proposed a two pronged approach whereby we give those who are already committed tools and confidence to stage everyday interventions. For resisters, Htun concluded, showing them data won’t convince them. Rather, years of diversity promotion research suggests that you have to involve resisters in behaviors that change them over time.

Those interested in learning more can access a resource compendium of publications on the topic that ISSR shared with the event participants.

Social scientists are very much a part of the world they study. They have beliefs and values, are part of communities, and have their own identities. This workshop series focuses on the "positionality" of researchers, asking how our social location informs the way in which we go about our scholarly lives, the questions we ask, the approaches we take to inquiry, and the way that we conduct our scholarship more broadly. Our next panel on April 3, with Julian Go (Boston University), Kelly Moore (Loyola University) and Banu Subramaniam (UMass Amherst), explores how the history of social science influences its present. Learn more and register now!