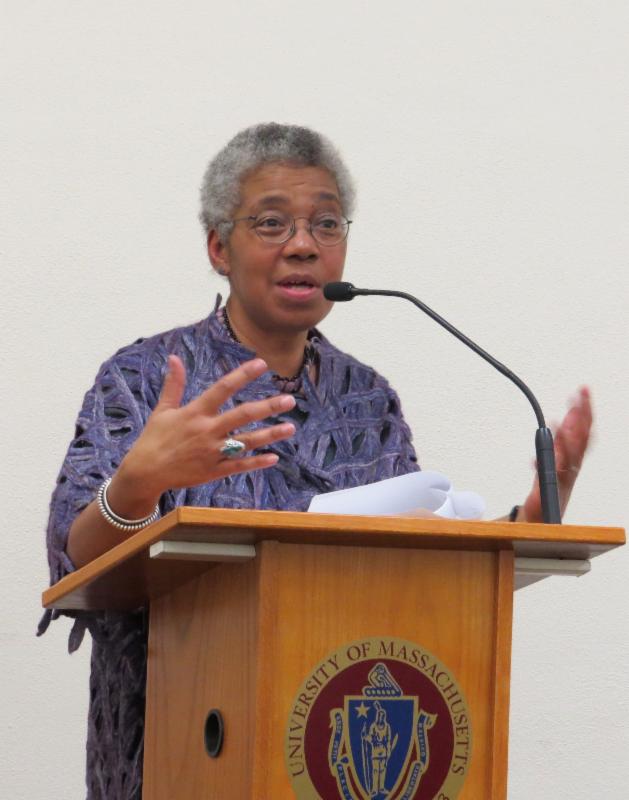 Barbara Fields visited the UMass campus and the ISI community from February 18 - 20 as the 2014 ISI Resident. Her visit was active, wide-ranging and successful. She presented a public lecture entitled "Was Emancipation a War Crime?" to an engaged audience of faculty, students, and community members. In addition, she visited classes in the departments of History, Anthropology, and Afro-American Studies, as well as taking part in several graduate seminars, and conversing with this year's ISI fellows, who have been discussing the theme of "Emancipation" in this year's seminar. Special thanks to Professor Fields and the many others in the ISI community who made the 2014 Residency such an exciting, engaging experience for all.

A leading scholar in American history, Professor Fields specializes in southern history and 19th-century social history. Her many books include Slavery and Freedom on the Middle Ground: Maryland during the Nineteenth Century (1985) as well as the co-authored volumes The Destruction of Slavery (1985), Slaves No More: Three Essays on Emancipation and the Civil War (1992), and Free at Last: A Documentary History of Slavery, Freedom, and the Civil War (1992). Her most recent book, co-authored with Karen Fields, is Racecraft: The Soul of Inequality in American Life (2012). Called urgent, compelling, demanding and impressive, Racecraft locates the failure of achieving a post-racial America in the limited and inadequate vocabulary, language, and concepts presently used to discuss race and inequality.