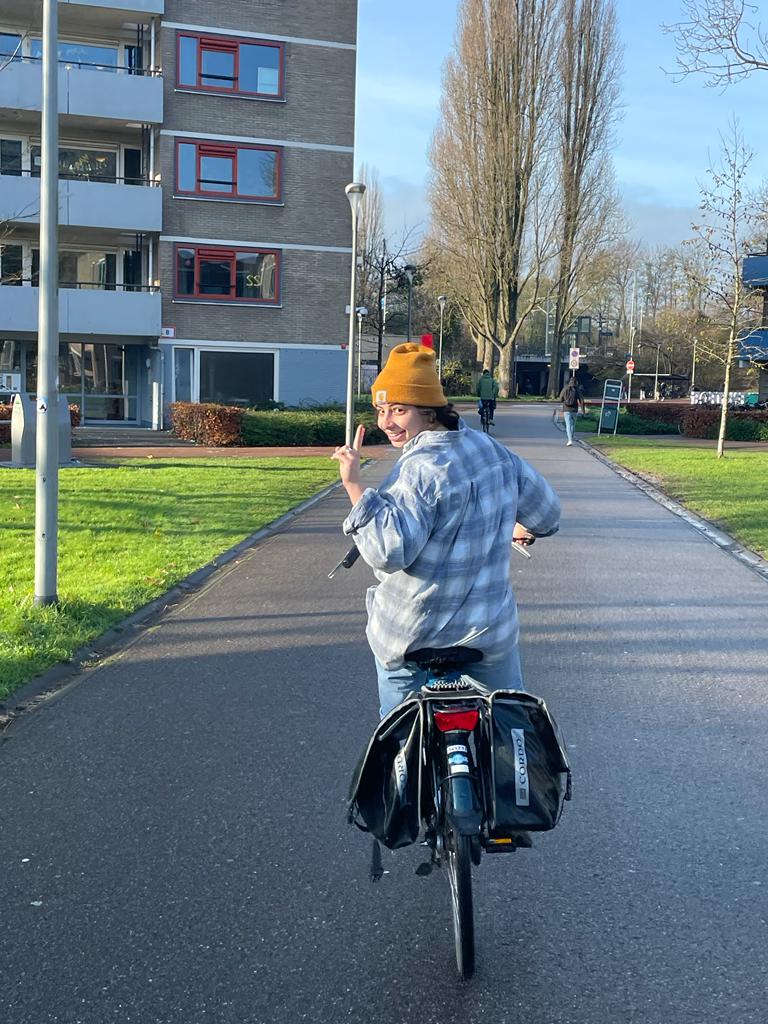 I Am UMass Abroad: Hannah Sternburg

Hannah Sternburg ‘22 (Political Science) spent Fall 2021 studying at Vrije Universiteit in Amsterdam, Netherlands. Above is a photo of Hannah riding her bike into the city from her apartment. “This was in November when the rain finally broke and we got some sunshine. You can see I've got my bags attached to the back of my bike, as my bike was my main form of transportation. I put everything in them: yoga mats, pizza, laundry, and groceries.” Read her reflections on her time abroad, including her thoughts on Amsterdam itself, her coursework, and Dutch food, language and celebrating an international Thanksgiving in Amsterdam below.

I chose to study abroad in Amsterdam at Vrije Universiteit (VU) because my grandparents took a trip there when I was in middle school and I thought it was the coolest thing. I'd heard that Amsterdam is a really open and welcoming place so I wanted to see for myself what the hype was all about.

Living in Amsterdam and studying at VU was drastically different from UMass, not just because it's in another country, but because it's a city school as well. The city is such a special place! Everything is a bit smaller in the Netherlands compared to the States, from the showers to cars. There are also almost twice as many bikes as people in Amsterdam, so the bike culture is something really cool and different about Amsterdam.

One of my favorite classes at VU was called Amsterdam Jewish Culture. As someone who is Jewish, I wanted to learn more about my own people's history and culture in an area that has such a rich and well-documented history. My class got to go on excursions every week to really cool locations within and outside the city that were relevant to the course. We got to go to the OLDEST functioning Jewish library in the world, Ets Haim, and speak with a historian who works there.

Something that surprised me about the academic culture is the workload and class structure. Almost all my classes had weekly readings assigned with no real classwork to go along. Don't be fooled though, the grade for the class was contingent on either just an exam or final paper. There was no messing around, I was responsible for keeping up with the course and performing well on the final cumulative exam which essentially determined my entire course grade.

One of my favorite foods from the Netherlands are stroopwafels. They are these thin pancake-like things with caramel in the middle and they're the perfect size to put over a mug of hot tea. The steam from the tea melts the wafel and the sugary delight flavors the drink.

A great saying in Dutch is lekker. This doesn't really have a direct translation to English but it means yummy/attractive/enjoyable. It can apply to food, people, experiences, really anything that feels I guess, lekker!

A profound moment I had while abroad was having Thanksgiving. I lived on a floor of all international students from across the world who never experienced a Thanksgiving. We all sat down, cleaned the usually messy kitchen, and cooked a massive meal of various foods from people's individual cultures. It was something I had never experienced before, but it was really cool to see all different kinds of people come together with their sense of home to create a giant lekker meal. We even had the post dinner walk where we were laughing, chatting, and enjoying each other's company while walking off all the delicious food.