The Thirty-Year Genocide: Turkey's Destruction of its Christian Minorities, 1894-1924 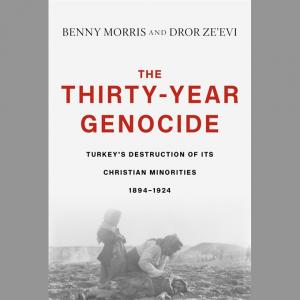 "The Thirty-Year Genocide" by Benny Morris and Dror Ze’evi

Benny Morris and Dror Ze’evi, co-authors of The Thirty-Year Genocide, (Harvard University Press, 2019) will describe and analyze the destruction of Turkey's large Armenian, Greek and Assyrian (Syriac) minorities by the three successive Turkish regimes led by Sultan Abdulhamid II (1894-1896), the Young Turks (1914-1918) and Ataturk (1919-1924). In all some two million Christians were murdered, under the leadership of these governments, by their Muslim neighbors for political, religious and economic reasons.

Benny Morris, born in Israel in 1948, was educated in Israel and England and taught at Ben-Gurion University during 1997-2017 and at Georgetown University 2015-2018. He has written books on the Israeli Arab conflict, including 1948, A History of the First Arab-Israeli War (Yale UP) and The Birth of the Palestinian Refugee Problem Revisited (Cambridge UP).

Dror Ze'evi completed his Ph.D. at Tel-Aviv University and was one of the founders and the first chair of the Department of Middle East Studies at Ben Gurion University, where he currently teaches. His field of research is Middle Eastern socio-cultural history and his books include An Ottoman Century: The District of Jerusalem in the 1600s (SUNY) and Producing Desire: Sexual Discourse in the Ottoman Middle East 1500-1900 (UC Press).