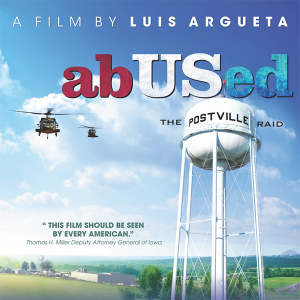 The 2019-2020 IHGMS seminar group is delighted to announce the visit of filmmaker and director Luis Argueta, who will be appearing for a screening and discusion of his documentary, "AbUSed: The Postville Raid"  (98 Minutes, 2010), followed by a Q&A with Mr. Argueta.

This film tells the story of what until recently was the most brutal, most expensive, and largest immigrant raid in U.S. history. The site was a kosher slaughterhouse and meat-packing factory in Iowa run by Hasidic Jews who employed hundreds of undocumented workers from Central America, 98% of whom were indigenous Mayans. The film speaks to the themes of immigration, Latino Studies, and Indigenous Studies, as well as to Jewish culture and Animal Studies. The perversion of the U.S. Constitution, the rule of law, and of due process, as well as the human face of immigration are revealed through the gripping personal stories of the individuals, the families, the town and outside volunteers that organized to respond to the raid. Light refreshments will be served.

For those unable to attend the screening, the entire film is available free of charge via the Kanopy database of the W. E. B. DuBois library catalog (your usual UMass id and password are required only if logging in from off campus):
https://umass.kanopy.com/video/abused-postville-raid