Inclusion and Exclusion: The Polish Nation and Arab America (CANCELED) 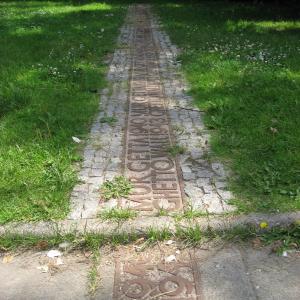 A discussion with Professor Geneviève Zubrzycki of the University of Michigan (Professor of Sociology), and Professor Mary Youssef of Binghamton University (Classical and Near Eastern Studies) on the topic of Arab and Polish States of Belonging: Literature, History, and Contemporary Politics. This event explores how the symbolic boundaries of nation and ethnicity are variably challenged by fiction writers from the Arab world and contemporary Polish nationals responding to their land’s Jewish legacy. Intentionally contrastive, this panel considers the potentially close relationship between creative writing and sociology and asks how each disciplinary approach generates different perspectives on subjectivity and belonging in a variety of different national, imperial, religious, and ethnic settings.

Mary Youssef, "Between Arabness and Americanness: Reading Cultural Translation in 'New Arrival' Novels, The Moor’s Account and The Angel of History"
Set in two different time periods, the 16th century in Laila Lalami’s The Moor’s Account and the turn of the 21st century inRabih Alameddine’s The Angel of History, the two novels represent the legacies of modern imperial and neo-imperial formations of national belonging that are rooted in predetermined territorial, racialized, gendered, and ethnicized identities. The talk explores how the novels disrupt these traditional and concretized boundaries of belonging whether in the formerly colonized Arab home(s) of origin or in its new counterpart in the United States by creatively crossing their dividing lines.

Mary Youssef is Associate Professor of Arabic Literature at Binghamton University, the State University of New York. She received her Ph.D. in African Languages and Literature from the University of Wisconsin at Madison. Her research interests include modern Arabic and Arab American Literatures. Her book Minorities in the Egyptian Novel (2018) focuses on the representation of racial, ethno-religious, and women minorities in contemporary Egyptian novels, particularly those written in the 21st century. Her current research continues to examine Egyptian novelistic production, especially after the January 2011 revolution and the old regime's reassumption of power. Her new research explores negotiations between Arab and American identities in Arabophone and Anglophone Arab immigrant novels in the United States.

Geneviève Zubrzycki, "The Polish Nation: Symbolic Processes of Inclusion and Exclusion"
Questions of what Polishness is and what Poland “should be” have animated Polish culture wars since the fall of communism. One side favors a traditional vision of Polish identity crystallized around Catholicism, conservative values, and a national narrative emphasizing Polish martyrdom and heroism. Antisemitic tropes plague that ethnoreligious vision. The other side espouses progressive values, promotes secularism, and is engaged in a critical reckoning with the participation of Poles in violent crimes against Jews during and after the Second World War. Many in that camp are engaged in a Polish-Jewish dialogue and are striving to discover and recover Poland’s Jewish past. Those efforts predate Poland’s recent sharp turn to the right, and persist in the current populist moment. They are visible in the proliferation of festivals of Jewish culture throughout the country, the commercial success of klezmer music, the spread of Judaica bookstores and Jewish-style restaurants, the opening of new museums, memorials, and memory spaces, and the development and expansion of Jewish studies programs and Holocaust research centers at multiple universities. Given the small size of the Jewish community in Poland, the majority of participants in those initiatives are non-Jewish Poles. Jewish communal life itself has, however, undergone an important renewal since 1989. With the lifting of longstanding taboos, many Poles discovered Jewish origins, and those already cognizant of their Jewish origins began to publicly declare them. Non-Jewish Poles’ current fascination with all things Jewish abets that process. How can we make sense of these seemingly contradictory phenomena: ethnoreligious nationalism, right-wing populism and antisemitism on the one hand, and a multi-faceted “Jewish revival” on the other? One might be tempted to see philosemitism as Poles’ outlet for the collective expression and attempted expiation of guilt, or as the antisemitic folklorization of Jewish culture. One could view it as merely reactive, an anti-antisemitic counter to right-wing nationalism. In talk, I will discuss how anti- and philo-semitism are primarily related to the specific logic of ethnoreligious nationalism in Poland; two facets of a political struggle to define the symbolic boundaries of Polishness.

Geneviève Zubrzycki is Professor of Sociology and faculty associate at the Frankel Center for Judaic Studies at the University of Michigan, where she also directs the Weiser Center for Europe and Eurasia and the Copernicus Center in Polish Studies.  She has written extensively on nationalism and religion, collective memory and national mythology, and the contested memory of the Holocaust in Eastern Europe.   Her publications include the award-winning The Crosses of Auschwitz: Nationalism and Religion in Post-Communist Poland (2006; Polish trans. 2014); Beheading the Saint: Nationalism, Religion and Secularism in Quebec (2016, French and Polish trans 2020); and National Matters: Nationalism, Culture and Materiality (2017). She is now completing a third monograph on the on-going revival of Jewish communities in Poland and non-Jewish Poles’ interest in all things Jewish, tentatively entitled Resurrecting the Jew: Antisemitism, Philosemitism and the Politics of Memory in Contemporary Poland.

This event is co-sponsored with the support of the Department of Judaic and Near Eastern Studies at UMass Amherst.